Germany’s Other Genocide: Dress Rehearsal for the Holocaust 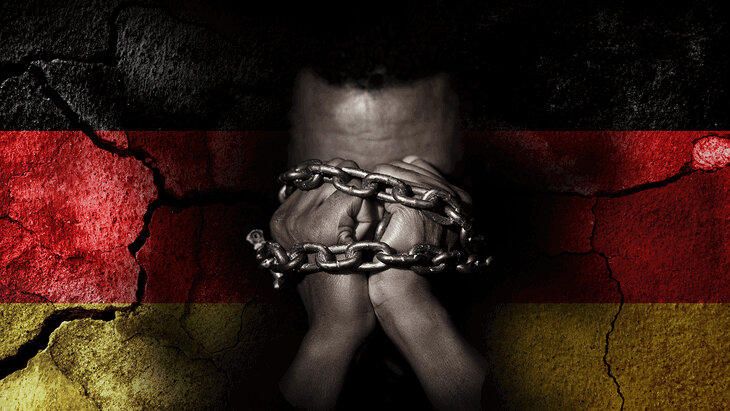 Germany has recently publicly acknowledged that it committed genocide a generation before the Holocaust, when German troops murdered 80,000 people in present-day Namibia in Southern Africa.

It has been called the “forgotten genocide” and the first genocide of the 20th century. German soldiers targeted members of the Nama and Herero ethnic groups for extermination between 1904 and 1908 in what was then called South-West Africa, and was brutally colonized by Germany.

Dr. Elizabeth Baer, a research professor at Gustavus Adolphus College in Minnesota and a researcher with the United States Holocaust Memorial Museum in Washington DC, has researched Germany’s genocide of Jews and Gypsies as well as the Nama and Herero. In her 2017 book The Genocidal Gaze: From German Southwest Africa to the Third Reich, she documents how these genocides are linked. Dr. Baer recently spoke with Aish.com about her work and what we can learn from Germany’s belated acknowledgement that it committed genocide in modern day Namibia. 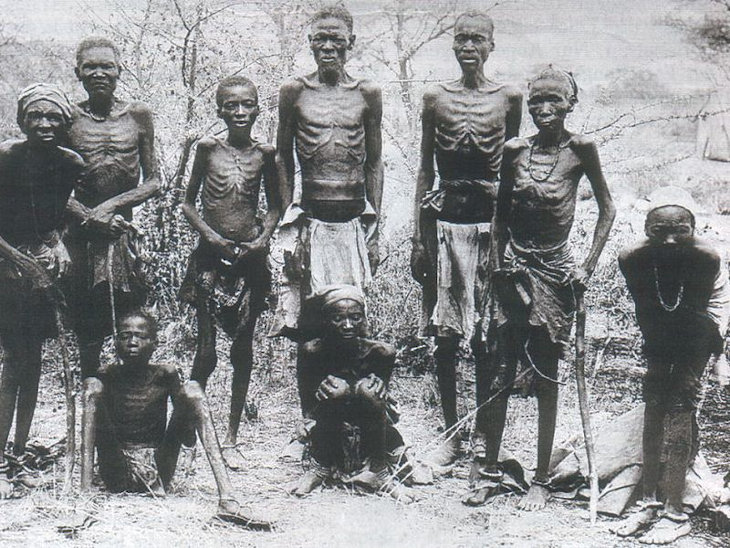 “I didn’t learn much about the Holocaust growing up,” Dr. Baer notes. Raised as a Catholic, Dr. Baer traces her drive to research the Holocaust to a trip for historians that she took to Poland and Israel with a Jewish organization in the early 1990s. The group was led by survivors of the Warsaw Ghetto who showed Dr. Baer the sites of several Nazi killing centers in Europe. Then she and her fellow historians visited Israel where they toured a kibbutz and visited Yad Vashem, Israel’s national Holocaust memorial. “It was a life changing moment for me,” Dr. Baer recalls. She began focusing her research on the Nazi genocide of Jews, publishing several books on the subject.

A chance conversation at a history seminar a decade ago set Dr. Baer on a new path, when she learned about the German genocide of the Nama and Herero peoples in the early 1900s. “So much less was known and published about it then,” she observes. With very little research documenting these horrific genocides, Dr. Baer knew she had to work to uncover their details. She took several trips to Africa to do research. “I thought I was going to write an article, but it turned into a book,” she recalls. The more Dr. Baer researched, the more she was struck by the many parallels between the German genocides in Namibia and those in Continental Europe a generation later.

As German colonizers settled the lands of present-day Namibia in the late 1800s, two ethnic groups resisted the encroachment on their traditional herding lands with particular fury: the Herero and the Nama. After a series of bloody uprisings by Herero warriors, Germany dispatched the fearsome military commander Lothar von Trotha to the region. In South-West Africa, von Trotha issued a dire warning: every member of the Herero people – and later, every member of the Nama, as well – would be imprisoned, made to perform forced labor, or shot. 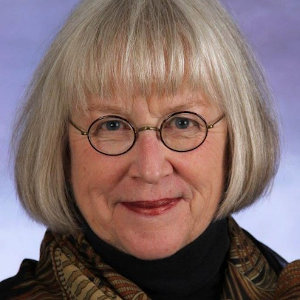 Herero and Nama people were rounded up and sent to concentration camps. The most notorious of these was located on Shark Island and was the scene of horrific brutality. Prisoners were forced to perform backbreaking labor, were starved and tortured. Disease ran rampant. Thousands of men, women and children perished in Shark Island and other German-run concentration camps. Prisoners who died were decapitated and their heads sent to Germany so that scientists could “study” their skulls and supposedly prove that African people were inferior to Germans. For years, thousands of Herero and Nama were subject to the most gruesome atrocities and hatred by the hands of their German tormentors.

So venomous was the way Germans looked down upon Herero and Nama people, Dr. Baer invented a new term for it, and made it the title of her book on the subject: the Genocidal Gaze. “What I really mean by it is thinking about human beings in the framework of a racial hierarchy,” she explains. “At the top was Aryans. People at the bottom were perceived as sub-humans or less than human.”

In the case of the Herero and Nama people, Dr. Baer notes that their cattle-herding way of life was used to categorize them as a people “who didn’t have a history, didn’t have a religion, didn’t have a civilization.” By looking at the Nama and Herero as somehow less than human, German colonizers enabled their extermination. A generation later, Germans did the same thing to Jews, dehumanizing them and convincing people that they were less than fully human. In the runup to the Holocaust, Dr. Baer notes, “Jews were viewed as vermin; they were called lice, and unworthy of life.” 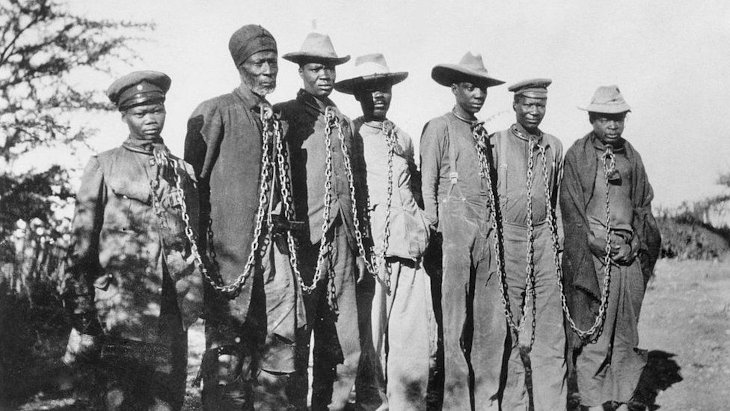 Seven Herero men in chains in what was then German South West Africa but is now Namibia. Germany has agreed to pay for atrocities committed between 1904 and 1908.

The first time that Germans used the notorious term Lebensraum – meaning that they deserved to seize new lands for Germans to live in – was in Namibia, Dr. Baer discovered. A generation later, Lebensraum was used to justify seizing European territories and deporting their inhabitants. “Lebensraum goes back to the 1890s to the era of Germany’s colonization of Namibia. The idea arose that they could exterminate the uncivilized sub-humans so they could have space for a colony.”

Dr. Baer has documented ways in which this odious ideology travelled from German colonizers back home. “People involved in the genocide and lengthy war with the Herero and Nama wrote memoirs in Germany,” she explains. The 1908 novel Peter Moore’s Journey to Southwest Africa – written by a man who never actually visited Africa – embodied what Dr. Baer calls the Genocidal Gaze and popularized it in Germany.

“The main character says to Peter Moore: these people deserve death under God and man because they’ve built no houses and built no wells,” Dr. Baer cites. The novel was a great favorite of Hitler. During World War II, Hitler had this odious book published in a small pocket-sized edition so that German soldiers could keep it in their pockets as they went to battle. “It established the attitude among the German people that genocide is acceptable in certain circumstances when the subject of the genocide is ‘sub-human’.”

The genocide of the Nama and Herero people helped German authorities perfect killing on an industrial scale.

“What I am arguing is that the genocide in Africa was sort of like a dress rehearsal for the Holocaust,” she explains. In addition to establishing the idea that some groups could be killed with impunity, the genocide of the Nama and Herero people helped German authorities perfect killing on an industrial scale.

Photos of the German concentration camps in Namibia survive, and there are unsettling similarities with the concentration camps in which Jews and others were imprisoned during the Holocaust. In Namibia, German troops forced some imprisoned women to work in brothels – the sadistic way they did this was copied a generation later during the Holocaust.

In addition to concentration camps, in Namibia Germans experimented with setting up a death camp, with the express aim of killing people there. “Shark Island was a prototype for the death camp,” Dr. Baer explains. Some prisoners were kept in metal cages on the beach there. “There was no food, no houses,” she notes. Using starvation as a method of killing people was pioneered at Shark Island, and later copied during the Holocaust. 80% of the Herero people and about half of all Nama people were killed during the German genocides of 1904-8: about 80,000 people.

80% of the Herero people and about half of all Nama people were killed during the German genocides of 1904-8: about 80,000 people.

These days, Dr. Baer has retired from full time teaching and is spending much of her time on research. What keeps her motivated is the fear that the hatred and dehumanization she’s written so much about might return. “Look at the world right now,” she warns, noting that hatred and demonization of others seems to be growing. “We have to take these types of attitudes very seriously,” Dr. Baer warns.

With Germany’s belated acknowledgement that it committed genocide in Namibia, there is some room for learning the lessons of the past and possibly making amends. In Germany, the term Vergangenheitsbewältigung means coming to terms with the past. When it comes to the Holocaust and the genocide of Jews, Gypsies and others, Dr. Baer notes “they built monuments and made reparations.” Now that Germany has acknowledged the horrors it perpetuated in Namibia, perhaps some measure of regret and self-examination might be possible. “Germany’s acknowledgment might have an impact on current affairs,” Dr. Baer hopes, enabling more people to learn about genocides in the past and perhaps help guard against any in the future. 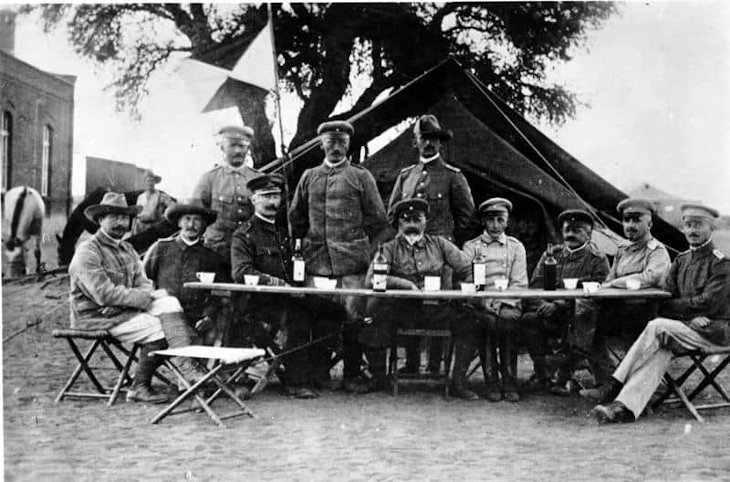 General Lieutenant Lothar von Trotha, the chief military commander in German South-West Africa, with his staff during the Herero uprising, 1904.

Dr. Baer believes that we all learn from Germany’s acknowledgement just how dangerous it can be to accept racial or ethnic hierarchies as a framework for thinking about other people. “We are all human beings with the same needs and desires and fears – it’s critical that we begin to treat other human beings with kindness and empathy” instead of fear and hatred and demonization.

Four Strangers, Three Faiths and One Extraordinary Escape to Freedom