The Crews Missile: A Reply 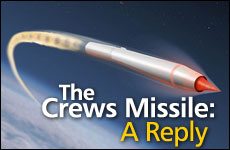 Advice to Nick Crews, the disgruntled father who publically blasted his kids for their failures.

They’re calling it the Crews Missile. It’s the viral letter written by Nick Crews, a retired military officer in Britain, to his three children, excoriating them for the “cock-ups” they’ve made of their lives.

Broken marriages, less-than-stellar careers, Mr. Crews’ three adult children have been “bitter disappointments” to their parents. While “We are constantly regaled with chapter and verse of the happy, successful lives of the families of our friends and relatives and being asked of news of our own children and grandchildren,” Mr. Crews writes, his own children have given their parents nothing but distress at their string of poor decisions. “We have nothing to say which reflects any credit on you or us.”

His final punch in the letter, published in The Telegraph: “I want to hear no more from any of you until, if you feel inclined, you have a success or an achievement or a REALISTIC plan for the support and happiness of your children to tell me about.”

Mr. Crews’ letter immediately struck a chord; he was swamped with encouraging messages. Yet his letter might have been better aimed if it had acknowledged a few other truths.

Comparing ourselves with others

Mr. Crews makes the mistake of comparing himself to his friends. Measuring ourselves with others is one of the most destructive things we can do. Envying others, wishing we could somehow be like them, saps our self-esteem. In the Jewish view, each person is created in the image of God. We each have limitless value, and we each have our own specific mission and tasks in life. Getting hung up on what another person has – or what we think they have – only distracts us from our own individual paths.

Particularly today, when it’s so easy to present an unrealistically up-beat face to the world on social media, it can be easy to get lulled into the false sense that everyone around us is doing so much better, so why should we even make an effort to accomplish our own goals?

Why is Mr. Crews so upset? If it’s merely that he doesn’t have great anecdotes with which to regale his friends, perhaps he ought to consider limiting the time he spends with his chums (after all, it seems pretty esteem-sapping) and redirect some of those hours to spending time with his children.

They probably could use it. Since Mr. Crews became famous, he’s said he’s typical of many parents today who let their kids find their own ways in life, without getting too involved as they were growing up. It is when our children our young that they most benefit from a parent’s presence and involvement in their lives.

Sometimes all it takes is talking with our kids, and keeping the lines of communication open. A host of studies have shown, for instance, that sitting down to family meals together is associated with children doing better in school, having a lower incidence of drug and alcohol abuse, becoming happier, and enjoying healthier relationships. Even once a week meals together can help a family grow. The Jewish practice of sharing weekly Shabbat meals together can be a great place to start.

Even once our children have grown up, it’s never too late to talk about our values and goals in life. It sounds like Mr. Crews kids are going through a difficult time. It might be difficult – even painful – to stand by their side now and help guide them, but in the midst of marital and professional challenges they need his support and respect, more than ever.

Part of that respect extends to the way in which we rebuke others. Jewish law demands we only admonish people in a context of love and support. Our criticism is to be delivered in private, in a kind manner, in a way that we think will actually accomplish our goal of helping another. If we believe our words will not lead to any real change – if we’re just venting – then we risk harming the objects of our words, instead of helping them, and we’re to keep our thoughts to ourselves.

Before Mr. Crews complains about his children, he might try aiming his razor-sharp missile on himself.

There’s a famous story attributed to the great 18 century Rabbi Zusia. As a young man, Rabbi Zusia wanted to change the whole world. As he matured he realized that wasn’t possible, so he settled on changing his town. As time passed he realized that was too ambitious, so he decided to change his family. When he was an old man, a friend visited, and asked about his dreams: did he ever change the world? Rabbi Zusia replied no. And your town, the friend asked? Rabbi Zusia shook his head. Surely you were able to change your family, his friend said. No, Rabbi Zusia, said, he hadn’t managed that, either. But after after many years of work, Rabbi Zusia confided, he thought perhaps he had succeeded in changing himself.

It’s easy to criticize others; the more difficult challenge is to change ourselves. Mr. Crews should look in the mirror and see if he’s the person he wants to be. Perhaps he should ask himself where he has failed in raising independent children who are capable of sustaining a marriage and family. Perhaps after addressing some of his flaws and moving closer to becoming the person he truly hopes to be, he will be better equipped to offer aid to his children and receive some of the nachas he so desperately craves.

7 Ways to Get your Kids to Help You This Passover

And the Winner Is…

Will Your Child Grow Up To Be A Thief?
It Takes A Lot Of Faith To Be An Atheist
How Instagram Brought Back This Nostalgic Soup
What Makes Eli Run?
Comments
MOST POPULAR IN Family
Our privacy policy