The Chafetz Chaim & the Upcoming Election 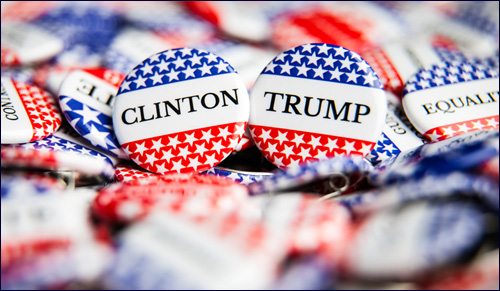 If only the two candidates would have taken the great rabbi’s lesson to heart.

Never in all my years have I witnessed the kind of heated arguments, the frenzied and passionate debates, the feverish and frantic disputes as the ones which surround the question of for whom to cast one’s vote for president of the United States. According to reliable reports, it’s not just friendships of long-standing which today are being torn apart because of strongly held differences of opinion, even marriages are facing the threat of dissolution and divorce as many husbands and wives find themselves political enemies.

Far be it from me to even suggest a personal preference for the position of the leader of the most powerful nation in the world. You won’t find that kind of article on Aish.com. But as someone like myself who has long learned to view current events from a Torah perspective I would be remiss if I didn’t point out a remarkable truth about this most amazing election of 2016 – a truth which puts today’s headlines squarely in the forefront of an ethical teaching emphasized by one of the greatest Torah sages of a previous generation.

Rabbi Yisrael Meir Kagan, who has become known simply as the Chafetz Chaim by virtue of the name of his magnum opus, is widely recognized as the greatest authority and foremost spokesman for the primacy of ethical speech in Judaism. He chose the title of his work on the ethics of speech from the famous verse in the book of Psalms, “Come, children, hearken to me; I will teach you the fear of the Lord. Who is the man who desires life (chafetz chaim), who loves days to see goodness? Guard your tongue from evil and your lips from speaking deceitfully. Shun evil and do good, seek peace and pursue it” (Psalms 34:12 – 15).

His work is based on prodigious Torah sources and profound knowledge of Jewish texts. Remarkably, this rabbinic sage saw fit to add an illustration from the wonder of modern technology – in his days. It was a time when telegrams began to be used. In a manner which seemed almost miraculous to them at the time, important news could be instantly sent to the most distant of places.

The one major problem was cost. Telegrams were charged by the word, so sentences and ideas were truncated to the barest minimum (something I personally remember from my youth!), making them at times almost maddeningly incomprehensible, abbreviated messages shortened to the extreme because everyone knew that “every word counts,” that we would have to pay for everything we said.

The Chafetz Chaim couldn’t resist the ethical message. One day, he said, we will stand before the Lord and have to give a final accounting, not only for our deeds but also for our words. And the price, he added with both smile and all seriousness, will be far more than the cost of a telegram.

Words have a cost. We’ve gone far beyond telegrams; our technology encompasses emails and twitter, Facebook and Whatsapp. We are part of generation which perhaps better than any which preceded us understands the full power of the warning in Ethics of the Fathers: “Contemplate three things, and you will not come to the hands of transgression: Know what is above from you: a seeing eye, a listening ear, and that all your deeds are always being inscribed in a book” (Ethics of the Fathers, 2:1).

If only the two candidates running for President of the United States would have taken this lesson to heart!

It is a powerful message to reflect upon on the eve of an election. But it is an idea as important to each one of us personally as it is to those on the stage of world leadership.

The days of our lives are the pages of a book we write while we are here on earth. Its contents are completely known to the Creator and there will come a time when we will be held accountable for every one of its entries. It is far more than a diary. It is an unvarnished testament to our successes as well as our failures. It is the legacy we leave for the future that testifies to the value of our existence. It includes everything not only for which we take pride but also all those things from which, in retrospect, we turn away with rueful embarrassment.

The Midrash offers a beautiful insight into the actions of prominent biblical heroes. It tells us, among the various examples, that had Reuben, Jacob’s first born son, known that the Torah would record that he saved Joseph from the pit into which he was thrown by his brothers, he would’ve done far more than simply rescue him; he would have carried Joseph on his shoulders the entire great distance to his father.

The point is profound. Even the good that we do would be enhanced multifold if we felt that it was being recorded. In the eyes of God there is no such thing as a private life, whether our actions make it into the book He authored or the one each one of us writes for eternity.

One Stitch Closer
Who Was Josephus? The Controversial Backstory of the Famed Historian
Should I Break Up, Get Engaged or Keep Dating?
Time Is Your Precious Commodity
Comments
MOST POPULAR IN Current Issues
Our privacy policy