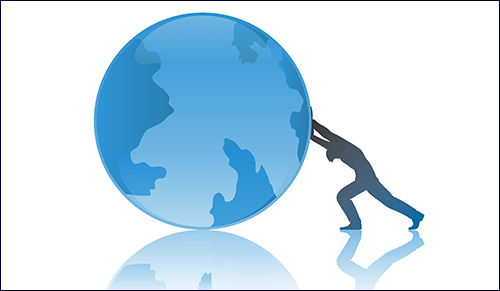 When I was a kid, my big dream was to become Vice President of the United States – second-in-command.

Why didn’t I dream of becoming President?

There's a certain comfort in knowing that "the buck doesn't stop here." It's easier not to take an independent stand.

Our egos crave approval and we don't want to stick our necks out.

So we avoid taking full responsibility – in the form of excuses, justifications and recriminations.

This has serious consequences. By definition, "not taking responsibility" means  ultimately abrogating some of life's most important decisions.

In settling for safe, that's the price we pay.

The Talmud (Sanhedrin 37a) says that every individual is obligated to say, "The entire world was created just for me." We each must be willing to stand up and declare: "I accept full responsibility for my life."

Taking that responsibility brings a reward in kind: the pleasure of shaping our reality. As the great sage Hillel implored: "If I am not for myself, who will be for me?" (Avot 1:14)

After college I chose a career in public relations – working for politicians, professional musicians and athletes. Then I realized: By hitching my ride to these celebrities, my life was playing out based on someone else's choices (choices inevitably based on various human foibles, fallacies and whims).

Why do we avoid taking responsibility?

Because it's a lot of hard work. It requires tremdnous focus and discipline to engage in the energy-intense activity of "thinking."

The comfortable choice of lying in bed, eating pizza and watching TV is so much easier.

85 percent of people would rather die than think.

As Thomas Edison famously said: “Five percent of the people think; 10% think they think; and the other 85% would rather die than think.”

To counteract this tendency, the Torah provides a tool. If you see a lost object – i.e. you are aware of a problem – you are obligated to return it to the owner. Fair enough.

Yet the Torah adds a deeper dimension: "You shall not hide yourself from it" (Deut. 22:1). We are obligated to resist the temptation of pretending not to see the problem and going along our merry way.

In the Garden of Eden, the snake entices Eve to eat from the fruit, which then she gives to Adam. God then finds Adam hiding in the Garden. Until you take responsibility for yourself, God says, you are hiding from reality, living a delusion.

How do we ensure that we're not hiding from responsibility?

The rule is: Anything that comes across our path – i.e. any problem we're aware of – is a personal sign. Cataclysmic threat from Iran? Poverty in our cities? Lack of Jewish unity? Once we're aware of a problem that we can influence, we are obligated to do something about it.

Deep down we know this to be true: If you’re a trained EMT and pass by a guy bleeding to death, his fate is on your head.

What can we do to help the kidnapping of three Israeli teens?

Imagine that your cousin is unemployed. What can you do to help? Minimally take one minute and think: What is one small step that could lead to something more?

Israel today is convulsed by the kidnapping of three teens. A huge manhunt is underway. What is the "one thing" we can do to help? At a minimum, write your Congressman and the President, expressing outrage at the abduction of an American citizen, Naftali Frankel. Demand that no more U.S. tax dollars go to funding the terror organization Hamas. Use the hashtag #bringbackourboys to keep this issue at the forefront. And pray.

In a world beset by problems, big and small, if we're aware, we're responsible.

Yes, the buck stops here. It’s harder than sleeping in, but at the end of the day, nothing is more meaningful and fulfilling than living in reality.

Soul Control, Part 1: Self Esteem
Where Do the Laws of Nature Come From?
Saadiah Gaon, Rashi and Maimonides: How Three Rabbis Revolutionized Judaism
King Sennacherib and the Siege of Lachish
Comments