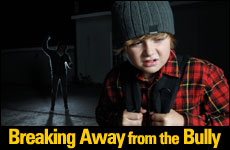 When I was in fourth grade, Wednesday was my favorite day of the week. My mother had a weekly program on Wednesday which prevented her from being home at lunch time. This meant that at least one day a week I avoided being the only kid who took the bus home, and would instead eat lunch in the cafeteria with the rest of my friends and classmates.

By the end of that same year, I came to hate Wednesday.

One particular Wednesday, at the sound of the bell, I grabbed my paper bag lunch and trudged over to the cafeteria. I began to unpack my lunch, my lank, brown hair hanging loose around my face. I pulled out my sandwich – peanut butter and jelly on white bread – and was surprised to find something else in the bag. I smiled as I pulled out a strawberry yogurt and spoon.

I opened the yogurt and began to mix the sweet fruit on the bottom into the creamy white yogurt. Once I had achieved the perfect delicious consistency, I dipped my spoon in again and prepared to take the first bite. At that moment, someone slammed into my back, and my yogurt – instead of entering my mouth – splashed onto my shirt and my hair.

"Hey, that's why her hair looks like that. She washes it with yogurt!" Crystal called out.

More laughter followed as I jumped from my seat and ran to the bathroom to clean up. Crystal had done it again, as she would continue to do for the next five or six years.

At one point, when we were already in high school, Crystal tried to renew the merciless teasing of our younger years. I rolled my eyes and walked away. By then, I was a different person and her words could not hurt me as they had when I was 10.

Passover is the time of Jewish redemption, when we commemorate our release from Egyptian slavery. But this is also the time to let go of the baggage that is tying us down from achieving our own personal exodus.

Slavery is about more than just forced labor. In today's world we become slaves to all sorts of things.

A young child is enslaved by a bully. He feels trapped by the suffering and constant mistreatment. But at some point, he will be physically released. Whether it is age, distance or other circumstances that take him out of the bullying situation, the child is experiencing his own personal exodus. However, if he holds on to the slave mentality, the master will continue to control him.

The Torah says that the going out of Egypt was a physical freedom, but psychologically the Jews still felt enslaved, emotionally attached to their Egyptian oppressors. It wasn’t until they saw with their own eyes how the Egyptians drowned in the Red Sea that the Jews felt truly liberated.

I once read an article where a woman felt guilty about the way she had treated another girl in school. She was encouraged to search out the other girl and ask for forgiveness. I wonder how I would react if Crystal or one of the other girls from my childhood found me and did the same.

When Facebook first came on the scene, I signed up and entered all the information of my schooling. I was excited to reconnect with long-lost friends and see if their lives had turned out as different from what they expected as mine did for me. When I pressed the “next” button, I was rewarded with a list of "People you might know." The very first profile picture sent shivers down my spine. Suddenly, I was 10 years old again and looking into the face of Crystal through tear-soaked eyes. Perhaps I didn't want to delve too deeply into my past, after all.

Looking back, I perceive things very differently. Crystal's hair was just as brown and lanky as mine. She was from a lower middle class home with a questionable family life. Her academic abilities were sub-par and she didn't even manage to finish high school with the rest of us. Her self-confidence hinged on her ability to disparage others. When I clicked on her Facebook profile, I discovered her life was a far cry from mine – and significantly less successful. Is this really the girl I had envied and allowed to control my social life for so many years?

Is this the girl I had allowed to control my social life for years?

The truth was that I had already forgiven Crystal and the rest of her gang. What they did to me was not really about me, but about them. Crystal had a problem and her only way of solving it was to make someone else look more idiotic than she. Even if that weren't the case – even if my bully had been the captain of the cheerleading squad and valedictorian – would that have made it any more my fault that she picked on me? Not the least.

And if – as the victim – I drag around the anger and resentment, who does that hurt? Only myself. The Torah teaches, "You should not hate your brother in your heart" (Leviticus 19:12). Why not? If it's in my heart, the other person won't know anyway. I'm not attacking them verbally or physically. I'm just carrying around a grudge. So what's the big deal?

The big deal is the effect it has on me. Like an untreated wound, the grudge festers and rots, making the entire body ill.

How were these girls able to have such control over me? Because I allowed them to. I measured my self-worth by their opinion of me. No matter how hard I tried to please them, it was never enough. I allowed them to decide who I was, instead of deciding for myself. And as I discovered in high school, the only response that would make them stop, was no response at all.

By letting go and forgiving them for the silly things that happened when we were 10, I allowed myself to heal. I put myself in charge of deciding who I was and who I was going to become. Did they need to ask my forgiveness? It would be good for them to feel remorse, but that should have no bearing on my actions. If I continued to hold a grudge, Crystal would move on with her life and I would still be 10.

By shifting the focus from "Woe is me," I was able to forgive, forget and move on.

Finding Freedom
For Every Individual, A Torah Scroll
Allegiance To The Monarch
Meet the Real You: Yom Kippur
Comments
MOST POPULAR IN Passover
Our privacy policy
Aish.com Is Looking for Great Writers