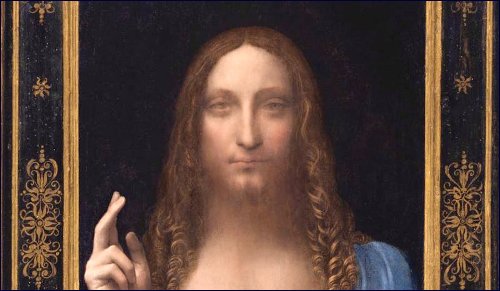 It all depends on who is its creator.

Can a work of art be worth close to half $1 billion?

Obviously somebody – and he is still anonymous – seemed to think so when he made the winning bid last week of $450 million at Christie's auction house for Salvator Mundi, a 600-year-old painting reputedly by Leonardo da Vinci.

This stratospheric purchase price makes the 26-inch tall portrait the most expensive artwork in history, beating out the previous record for a painting sold at auction, Pablo Picasso’s Les Femmes d'Alger (Women of Algiers), which went for $179.4 million in 2015, while Paul Gauguin's Nafea Faa Ipoipo? (When Will You Marry?) commanded $300 million in a private sale the same year.

Perhaps most remarkable about the huge sum paid for what was billed by Christie’s as “The Last da Vinci” is the amount paid for this very same poster-sized portrait in 1958 before its attribution to Leonardo da Vinci. At that time it went for the grand price of sixty dollars at auction, not overly impressing its viewers with its artistic merit. As late as 2005, when the same piece was plucked from an estate sale, a buyer was induced to purchase it for $10,000.

Many art critics point out that even if Salvator Mundi was actually painted by Leonardo, a position which remains disputed, it almost certainly does not deserve acclaim as “a masterpiece.” Shortly after the record sale, art critic Jason Farago wrote in the New York Times that although he is not in the position to “affirm or reject [the painting’s] attribution,” he believes the so-called masterpiece is “a proficient but not especially distinguished religious picture from turn-of-the-16th-century Lombardy, put through a wringer of restorations.” Art critic Jerry Saltz, in an essay for New York magazine, called the portrait “dead” and “inert.”

So why would anyone pay almost half $1 billion for it?

Even the wealthiest oligarch must receive some fulfillment in the expenditure of this incredible amount of money– and it is clear that the simple experience of viewing this painting is not a sufficient explanation.

Indeed, the proof that the value of a portrait has very little relationship, if any, to its aesthetic worth is what happened in 2011 in the aftermath of the discovery by Pierre Lagrange, a Belgian hedge fund manager, that a $17 million alleged Jackson Pollock painting he bought from a gallery contained a pigment of paint that was not sold commercially during Pollock’s lifetime. Soon numerous other purchasers from the same gallery of multimillion dollar artwork attributed to masters like Mark Rothko, Jackson Pollock and Willem de Kooning realized they had been fooled into buying forgeries.

The revelation of the real artist as Pei-Shen Qian, a 73-year-old Chinese immigrant who painted the forgeries from his garage in Queens for a few thousand dollars each, rendered them instantly worthless. Yet the paintings’ appearance did not change. They were exhibited previously to great acclaim. The only thing responsible for the drastic drop in their value was the real name of their creator.

For years Pierre Lagrange was a very happy man. He owned a painting which he said constantly awed him by its beauty and inspired him by its craftsmanship. But when he found out he didn’t own a real Jackson Pollock he was angry and miserable.

Clearly, more important than what we see is our belief in whom we assume to be its creator.

This insight carries with it an important religious message as well.

We are surrounded by a world of infinite beauty. King David, in his masterful book of Psalms, inspired us in countless passages of unforgettable brilliance to look around us with awe and appreciation at all the majestic works of nature. “O Lord, how manifold are Your works! In wisdom You have made them all: the earth is full of Your riches” (Psalms 104:24).

Why then do so many not appreciate it? Henry Thoreau put it beautifully when he asked us to remember that “Heaven is under our feet as well as over our heads.” Heaven surrounds us on earth but only if we believe in heaven above; to truly appreciate creation we need to recognize the truth of a Creator.

For those who believe life is a result of a godless evolution, the world is reduced to a mere forgery, as valueless as an inauthentic Leonardo da Vinci or Jackson Pollock.

George Santayana famously said that “the world has its music for those who will listen.” We can truly treasure its beauty, but only if we listen to its lyrics of actual authorship by the Ultimate Creator.

For Those in Recovery, Be a Blessing