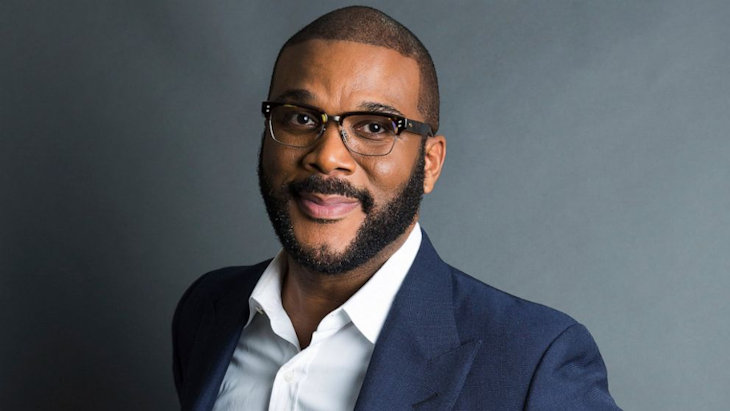 Thank God, there are angels all around us, even during a pandemic.

In the world of COVID-19, grocery shopping has become an extreme sport. Wednesday morning, erev Passover, I was doing a last-minute run to the grocery store. Steeling myself, I prayed for a quick, easy, uneventful, successful trip. Little did I know what lay in store.

I arrived in time for senior hour, and the clerk at the entrance asked how old I was to make sure I qualified. Then she said, "An angel is watching over you today." Hmm. That seemed an unusually metaphysical greeting for my large neighborhood chain store. But it was erev Passover, after all. Then she explained an anonymous angel was paying for everyone’s groceries during senior hour.

Needless to say, that lifted my spirits, and I shopped gleefully and with abandon. Extra cans and containers of kosher-for-Passover staples? Yes. Yellow tulips for the Pesach table? Yes. Sparkling peach grape juice? Yes. (After all, Georgia isn’t called the Peach State for nothing.) And what miracle did I spy in the paper goods aisle? Toilet paper, yes. By the time I reached the checkout counter with Passover treats and an abundance of produce, my buggy was bulging.

The clerk who had greeted me with the news that an angel was watching over me stood nearby. “I feel like I’m on Oprah!” I exclaimed. She and my cashier were in good spirits, happy to be part of the mitzvah, even though they couldn’t or wouldn’t say who the anonymous angel was.

After I rang up my groceries at the self-checkout, the cashier took care of the payment at her register. Indeed, the receipt simply said, “Atlanta angel, $156.07.” I left in a cloud of delight, thanking the heavens and wondering who my angel was. 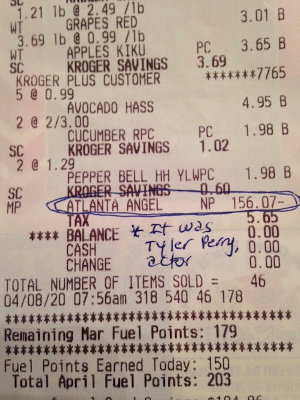 I didn’t have to wait long to find out. That afternoon the Atlanta newspaper solved the mystery.

Local movie star and media mogul Tyler Perry had paid for senior-hour groceries at 44 Krogers stores in metro Atlanta and 29 Winn-Dixies in his hometown of New Orleans.

“Senior and higher-risk Kroger shoppers in metro Atlanta did receive a nice surprise at the register this morning when they learned Tyler Perry had paid their grocery tab in full,” Felix Turner, the Atlanta spokesman for Kroger, said in the paper. “We would like to join our customers in thanking Mr. Perry for his kindness and generosity during this unprecedented pandemic. It was truly a pleasure to see our customers fill with joy and gratitude as the news spread throughout 44 stores across metro Atlanta.”

Only a few days earlier Perry had gifted 42 out-of-work servers at one of his favorite restaurants with $500 each.

Affirming the Good in the Face of COVID-19

My angel affirmed the good in the midst of the tragedy of this pandemic we are enduring. His generous spirit brought tears to my eyes. Being on the receiving end of his largesse, I embraced my day with added joy and enthusiasm. I had never experienced such a random act of kindness, and couldn’t wait to tell my friends and family about it.

“Wow. I am officially now a fan. A good man,” said my friend Ann.

This is not an angel who’s had it easy. Perry, 50, suffered an abusive childhood and thought he would die before he grew up, according to a letter to fans he once wrote on his website. As a young man trying to break into the entertainment world, he ended up homeless, living on the streets of Atlanta.

He had just written his first play. “I had just moved to Atlanta to try to launch this play, so I went to work,” he said in a 2016 commencement address at Tuskegee University, a private, historically black university in Alabama. “I managed to save $12,000 and I put the show up working in used cars, as a bill collector. I thought 1,200 people would show up that weekend, but only 30 showed up. My car payment, rent, everything was tied up in it so I ended up homeless with no money and nothing to my name.”

Perry almost gave up. His mother suggested he set his sights on a steady job at the phone company. However, he started hearing from audience members how his play had moved them. “My life shifted after that,” he recalled. “My intention became, how do I serve other people? How do I lift other people?”

I was inspired by how his senior-hour act of kindness not only uplifted me, but also the grocery clerks and everyone I have told this story to. I resolved to pay it forward, living more generously through money and deeds. Thank God, there are angels all around us. I aspire to be one of them.

Pharaoh, Putin and Why This Passover is Different
Near Death Experience Panel
The Western Wall: The Heart of the World
Ask the Right Question: Tisha B’Av
Comments
MOST POPULAR IN Current Issues
Our privacy policy
Aish.com Is Looking for Great Writers