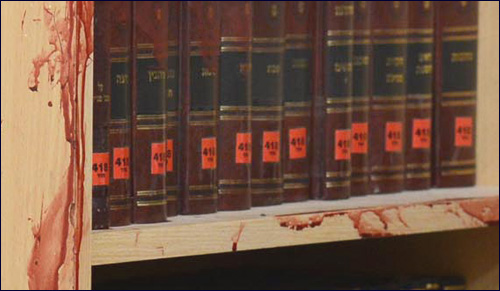 Gaining some perspective on an unfathomable tragedy.

When I saw the horrific photos of this morning's terror attack in Jerusalem, all I could think of was a scene from the Holocaust. Men lying in pools of blood – wrapped in a tallis and tefillin on their foreheads.

Twenty-six orphans. Who will be their father now? Wives turned suddenly into widows. Families destroyed. A shul turned into a massacre site. It is too heartbreaking to be real.

This morning in America, I heard my children awakening. Their footsteps echoed softly down the stairs, and I fought to keep back my tears as I thought about the 26 children who woke up today to find their fathers gone forever. My heart felt like it was caught in throat. My oldest daughter knew right away.

"Did something happen in Israel?" she asked. I showed her the street where the attack happened – with our former apartment building on Agassi Street in the background.

"But how could it have happened right there?!" she exclaimed.

That had been one of my first thoughts, too. How could a terror attack be right near the playground where my children used to laugh and slide and look up for their father's face as he came out of shul? I remember the children on their way to school at 7 a.m. A beautiful city turned into the scene of a nightmare. How?

How could it be that these color photos from 2014 look so eerily like a black and white picture from the Holocaust? How could this be happening?

In the face of this overwhelming horror, I remind myself that we have to face reality, and avoid these four myths about tragedy:

The first thing many of us do when reading about a tragedy is to disassociate ourselves from the place where it occurred. "It's far away... That's a road I never travel... I don't use the light rail, or take that bus, or eat in that restaurant..."

This terror attack drives home the importance of dispelling this myth. It happened in a place where many Americans live and work and travel to. It happened in a synagogue where any of us could have been. Tragedy doesn't happen only in specific places and times. As anyone who walked down the streets of sunny Manhattan on the morning of September 11 can attest, tragedy occurs wherever evil finds a way into this world.

Myth 2 - The tragedy is over when the funerals end.

During this terrifying, grief-drenched period of terror attacks in Israel, many of us are afraid to read the news each morning. As innocent people are murdered and as funerals echo through the land, we feel the heaviness and injustice as a nation.

But when the funerals end and the story of the attack fade, many of us forget. There are heart-broken parents. Lost widows. Inconsolable children. Severely injured people who survived the attacks but will never see or walk or hear again. The tragedy lingers for months and years.

And for those who have lost their loved ones, it goes on forever.

Myth 3 - This only affects those who live there.

That isn't true. Every time we lose a fellow Jew we experience a tremendous loss as a nation. Every Jew has a mission, a treasure, a gift to contribute to the world. And when we lose that person we lose that gift. We will never know what could have been had this person lived, whose lives they may have affected, what wisdom and light they might have brought into this world.

Each of us, wherever we are in the world, should feel this loss keenly. As a nation, we have lost an important part of what makes us whole. The effect will reverberate and touch each of our lives for a long time.

Myth 4 - Such barbarism can be explained.

My older children ask: "Why would someone do that? Why would they go into a synagogue and start shooting innocent fathers like that?" They still believe that I can give some kind of answer to make sense of this tragedy, to at least explain the searing pain.

But I have no answer. No one really does. There is evil and darkness in the world. We continue to fight back with the light of our Torah and the strength of our faith that goodness is more powerful than destruction. But we don't know why this person was taken from the world and not the person sitting beside him. We don't know why tragedy struck this city or that street. Terror attacks cannot be explained. Tragedy cannot give us any answers.

But we can learn to feel the loss the way we should as a nation.

As if the fathers were our own.

As if the orphaned children are ours.

As if the newly widowed wives are our sisters.

Because they are. The Jewish people are one family, and the pain echoes around the world as we mourn this horrific attack.

Pray for those who are injured. Pray for those who have lost loved ones. Every tear, every prayer, every Jew who mourns makes a difference. Because the one thing that is always true about tragedy is that it reminds us how much we all need each other.