Battles Are Won Within 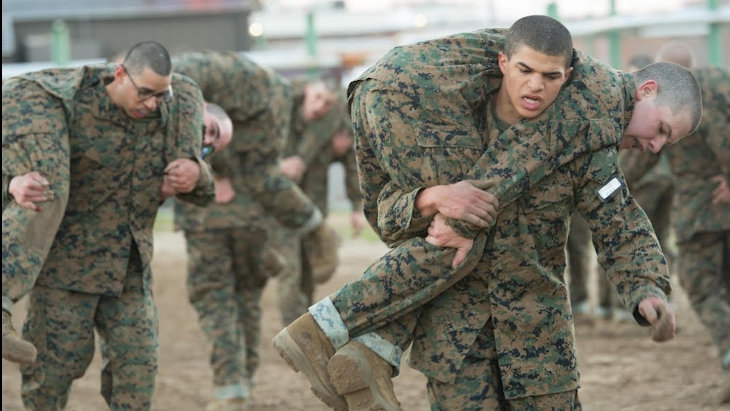 I recently visited the US Naval Academy in Annapolis. Coupled with a trip to West Point a few years ago, it was an opportunity to evaluate a possible road not taken. Not only are both campuses situated in extremely beautiful spots and dotted with architecturally stunning buildings, but they cultivate values that speak to my heart – discipline and loyalty and perseverance and teamwork – to name but a few.

Additionally, the married couples living there are frequently called upon to “adopt” the single midshipmen or cadets, providing them with a home away from home. It’s a role I could imagine myself playing, shades of a university outreach rabbi. Whether it’s something I would have actually chosen or not, there is much to learn from the ethos of these two branches of the American military.

And a billboard I saw out my window a few weeks ago highlighted another lesson. It was an advertisement for joining the Marines that caught my eye: “Battles are won within” it said.

Never having followed that other path and never having been a Marine, I can’t testify to the slogan’s accuracy on the battlefield but I can certainly recognize its truth in life. The real tests come not from external enemies but from internal ones. The real challenge is the inner struggle, the war against the voice within us urging us to be self-indulgent and callous, to be takers and not givers.

I imagine that if I was a marine (quite the stretch, I know!) that voice might tell me to give up, it’s too difficult, it’s too risky, it’s not worth it. And if I was marine, I would learn to push back against that voice reminding myself about principles and bonds of trust and going beyond my potential and never ever giving up or giving in.

Whether inside or outside the Armed Services, the voice is the same, the struggle is the same. It’s life’s challenge, life’s struggle and we all have to lift up and recognize that the truly important battle is the internal one.

Like the marines, we too need training and preparation. We can’t fight the battle without a strategy and a plan. The battle with our internal enemies is no less relentless than that with our external ones. We won’t succeed without a plan, without determination, without consistency and constancy.

I’m not sure why the Marines chose these words as their recruitment slogan; I’m not sure that would encourage me to sign up! But it is definitely an expression of truth, of reality; a description of how to achieve success. And like all carefully conceived battle plans and strategies, it just needs to be implemented.

Do You Have the Attention Span to Read this Entire Article?