Teaching Kids to be a Jewish Hero 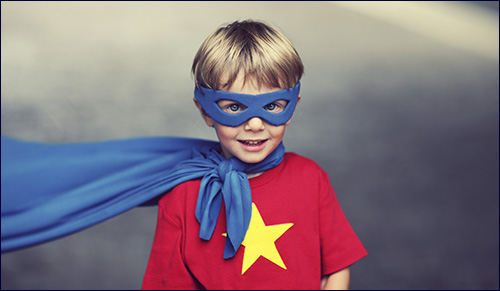 Five ways to help our children realize their hero potential.

Every kid has a secret fantasy of saving the day – being the one to stop the mugger, jump into the ocean to save the drowning child, commandeer the plane away from the hijackers. I think we all harbor that wish to be brave, to be a hero.

I met an elderly man in Safed who had thrown his whole body on top of hand grenade about to explode in a crowded plaza. It didn't detonate but his legendary act still inspired awe and gratitude years later. Now that's a hero, I thought. Every Israeli soldier who goes into his battle and risks his life is a hero.

But what is a Jewish hero? Are our heroes different? Ethics of the Fathers (4:1) asks, “Who is considered strong and brave? Who is regarded as a hero? Someone who conquers his yetzer hara – one’s impulses to commit wrong and do bad. As it written, “Better is one slow to anger than a strong man, and one who rules over his spirit than a conqueror of a city” (Proverbs 16:32).

This definition of a hero tells me lots of things:

Jewish bravery isn’t loud and public. You don’t need muscles and swords and guns. Here, you won’t find the sheriff single-handedly facing down a posse of Evil Guys while all the townsfolk follow each move from behind their windows.

It’s the battles that take place in your mind, the struggles that happen in the every day moments, whether you’re a four-year-old or forty. The Jewish concept of courage doesn’t require an act that’s grandiose or larger than life. You don’t have to grow up to become a hero. You can be one right now.

Here are five ways to help our children realize their hero potential:

1. Stick up for a classmate who’s getting picked on

I know a fourth grade girl I’ll call Leah. She had just switched schools because she had been bullied at her old school. In her new class, everyone liked her and she was doing just fine, but one day she witnessed a girl being publicly disinvited from a birthday party. Right then, Leah got up from her spot at the lunch table and sat next to the excluded girl. Leah announced, “If so and so isn’t invited to the party, then I’m not coming either.” Then she made a play date with the disinvited girl on the spot. That one act brought about a whole shift in attitude toward the excluded girl and changed her entire year.

Anyone in Leah’s situation would have simply kept her mouth shut. After all, she’d been bullied herself, but here in the new school she was well-liked. Why go out on a limb when there’s nothing to gain by it and a lot to lose? When I bump into Leah around town, she looks like your average adorable somewhat hyperactive fourth grader, nothing out of the ordinary, but the truth is, she’s a hero.

2. Overcome obstacles – persist, despite the odds stacked against you.

How would you describe a tzaddik, a righteous person? King Solomon wrote in Proverbs (24:16), "The tzaddik falls seven times and rises." The righteous person falls, but he gets up and tries again. And again. When others would throw up their hands, surrender, he or she keeps going.

Every time a mediocre student studies hard for a test, every time an athlete practices and struggles to improve his game, every time someone socially challenged tries to branch out and make new friends, that’s brave. Why? They’re refusing to lock themselves into a limited view of themselves. They’re willing to see greater possibility, their potential, even if means that they might fail. It takes courage and greatness to keep trying, to not surrender to the challenge or obstacle you face.

3. Stand up to the bigots, the anti-Semites and the rest of the jerks

Josh, a cashier with Downs Syndrome, was ringing up purchases in a grocery store, when a shopper in line began muttering out loud, “What’s wrong with these people taking forever? These retards have no business working here, wasting our time.” This despicable shopper in fact was a paid actor as was Josh (though he wasn’t faking the Downs), but the other shoppers listening in were real live people who had no idea their responses to this horrible mistreatment were getting filmed.

Many of the shoppers were repulsed by this display of prejudice and yet went along with it, smiled, or else just looked away. The compulsion to be agreeable, to not make waves, to be liked, even by strangers, was so strong that people went against their decent natures and just smiled back at the cruel shopper. Would anyone stand up for Josh? Finally, two people did. Apparently they had friends or siblings with Downs and they took the obnoxious shopper’s comments quite personally.

A similar experiment took place in a bakery in Bloomfield New Jersey. Two teen-agers (actors) wanted to hang up a flyer about a job fair at their Temple, and the clerk (also an actor) said, “You all are Jews? No, you can’t put your Jewish agenda in our window.” He rips up the flyer. “This is what I think of all the Jews coming to our neighborhood, trying to steal all our jobs.” At first, the shoppers listen, shocked, disbelieving, but no one says anything. It’s terrifying, because you think – this is how terrible things happen, because good people are silent. Finally a woman in a pink shirt speaks up. She says, “You’re so offensive it’s unbelievable. Shut up.” She leaves, as do a number of other customers. Watching her, watching all the customers you want to break out in applause (except for the single customer who uses this opportunity to spew forth his own anti-Semitic nonsense).

Of course, in some cases it would be dangerous for our children to confront and stand up to prejudice coming from absolute strangers on the street. We live in crazy times. We can’t predict how people will react. But what about the friend or acquaintance who casually makes a snide comment about “the shvartzas” ruining the neighborhood? Should we teach them it’s okay to let it slide and nod in agreement, or do we teach them to say, “It hurts me when you talk about black people that way. It’s not okay.” It’s our job to teach our children to stand up for the Joshes in the world.

Three girls are at the lunch table discussing their absent friend. “You know where Cindy really is?” Everyone leans in. “She’s getting a wig. See, she’s really bald. She’s got this thing called alopecia.” Everyone gasps. “I never knew!” “Is that why she’s always wearing a cap?” “Yeah, but don’t tell anyone, she’ll kill me.” “I feel sooo bad for her.” And they do all feel soooo bad for Cindy, but not enough to stop talking about her and guessing how much the wig costs and trying to picture her bald.

The truth is, no one wants to be the goody-goody, to put the kibosh on the latest morsel of juicy gossip. It feels socially awkward and holier than thou. That’s why it takes bravery and strength of character to change the topic or to get up and leave or to gently remind them how much it would hurt if anyone were to discuss their secrets behind their backs.

It’s natural to want to blend in. And no one feels that need to fit in with their peers more acutely than kids. But at what price? Peer pressure can have a way of diluting our Jewish identity and watering down Torah observance. That’s why the kids who aren’t afraid to wear their identity proudly strike me as heroes. Think of the boy who decides to don a yarmulke in his public high school despite the guffaws, or the girl who chooses to wear the more modest item of clothing that doesn’t meet her friends’ hyper-trendy standards, or the kid who is the only one on his block whose family doesn’t have a Christmas tree and insists on lighting a menorah.

What many of these instances of bravery share is a willingness to separate oneself, to stand alone, even if for just a few moments. They are emulating our Patriarch Abraham who was called “the Ivri”, the one who stood on the other side. Abraham stood on one side of the world with his belief in one God, and the rest of the world stood on the other side with its man-made gods. It’s amazing -- and instructive – that he came to this awareness of God not as an adult but when he was a child, merely three. Think of it. The whole world was in thrall to idols but Avraham stood separate and alone in his belief of God.

That heroism is part of our spiritual makeup. Let’s teach our kids how to activate it.

Ruchama Feuerman’s new children’s book, “The Super Secret Diary of Bina Lobell” tells the story of brave girls, mean girls, and everything in between." Click here to order.

Maybe it's Serious?
Don’t Believe in Other Gods Versus God is One
Seeing Without Eyes
Why Shouldn’t We Eat Whatever We Want?
Comments
MOST POPULAR IN Family
Our privacy policy
Aish.com Is Looking for Great Writers