Father and Son Night Out 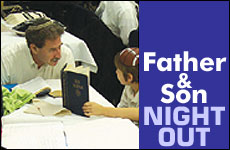 One hour a week can transform your relationship with your child.

How do you show your child what's really important to you?

For Michael Siegel of Atlanta, the answer lies in an innovative program called "Avot U'Banim" (Fathers and Sons). Every Saturday night between October and March, about 80 youngsters crowd Beth Jacob Synagogue's premises. The concept is simple: They come together with other fathers and sons who are also teaming up for a study session and lots of good, old-fashioned rabblerousing encouragement. There are prizes for good attendance, raffles, and refreshments.

The pairs settle down to study something they've decided on together. "Kids come from all educational backgrounds," says organizer Rabbi Moshe Hiller. "They spend quality time with their fathers here."

"It's great father-and-son time," says Michael. "It forces me to schedule time for my children, rather than leaving it to just ‘happen' whenever."

Programs have sprung up in many Jewish communities across the globe with the help of Avot U'Banim International. The group, which originated in Israel, now has over 1,300 affiliated locations in Israel, North America, England and France.

"When I was 19 and living in the Bayit Vegan neighborhood in Israel," says Rabbi Dovid Hershkowitz of Jerusalem, founder and Director of Avot U'Banim International, "we immigrants noticed that there weren't many programs for boys, such as we had been accustomed to elsewhere. So we started something just to keep kids off the street. We invited boys and their fathers to come and learn something together, hoping we'd get their parents more involved in how their sons spent their free time.

"From there, the thing took off. We realized we had tapped into something that really needed doing. We feel that the Jewish people have been ravaged by so many historical forces. Today, the challenge is in the breakdown of the traditional family, so that the bonds of mesorah – transmission of Torah values from generation to generation – have been weakened immeasurably. And anything anyone can do to strengthen the relationship between generations is extremely important."

Children whose fathers aren't present to accompany them are teamed up by program directors in each location with "extras" on hand or with other boys and their fathers.

Michael Siegel is the proud father of three sons, ages 11, 10 and 9, and they all attend Avot U'Banim together. "We start out by doing a round-robin, working on parts of the siddur (prayer-book). It's fun. They are all getting something out of it. It's a tangible thing that really helps them -- they practice navigating their way through the different prayer-books that are around and gain confidence in being able to keep up with everybody in shul. Then we move on and each child gets his turn with Dad while the others review."

Most groups meet weekly on Saturday night. Last year, there were 200 locations in North America affiliated with this network, and another 100 are slated to be added this winter. This represents a staggering 20,000 children in these affiliated programs alone.

Avot U'Banim International provides its affiliates with many resources that help make it all happen. They have produced a beautiful planner – now distributed in English, Hebrew, and French – which is given to each boy to help him track his attendance. Some 200 prizes were handed out through a worldwide raffle last year, with the grand prize netting the lucky winner -- and his dad -- a trip to Israel.

Local organizations running the programs usually call for in-town sponsors to up the ante. Sponsorship typically allows the program to include refreshments and prizes that really get kids going.

Part of the success is that the program addresses the needs of both fathers and sons. "For me," says Reuven Robbins," I want my son to have it all. I'm not so learned, personally, but he will have better opportunities than I had growing up – I'm proud of that."

There are many parents in just this situation -- with less formal Jewish education than what they are providing for their children. It's easy to imagine that even such a dedicated dad who's making it all happen might come to feel locked out, if Junior already knows more than his father does before he's anywhere near Bar Mitzvah. Father and son learning programs provide fathers with the tools to join in the equation and regain their rightful place as a vital link in the family tree.

"I feel like I'm part of my children's Torah study. This is a great support structure for transmitting our way of life to my children," says Siegel.
"I'm proud of the way this program is building continuity. I'd love nothing more than seeing my children make time to study Torah with their children, when the time comes."

For info on how to start an Avos u'Banim program in your community, or to join your existing program into this network, contact Rabbi Yosef S. Tanenbaum, info@ avosubanim.com

Dena Yellin, National Study Coordinator for Partners in Torah, is a freelance writer living in Montreal.

Your First Day of School

The Key to Raising Strong Children

Why doesn't God answer me?

Flying Solo
Would You Rather Be Right or Happy?
Korach’s Unique Punishment
Who Was Josephus? The Controversial Backstory of the Famed Historian
Comments
MOST POPULAR IN Family
Our privacy policy