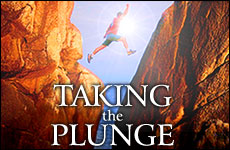 No one is ever completely ready for life's challenges. So what are you waiting for?

I nearly cried at a bar mitzvah I attended recently.

Heshy, the bar mitzvah boy, was neither friend nor relative – he was a student of my husband's and someone I knew only vaguely. And yet, as he stood at the podium looking so small in his painfully new suit – so vulnerable for a boy about to step into man's estate – my eyes filled.

They filled again as Heshy's grandfather stood up to speak about him. At the love and pride in the old man's voice, my heart came near to breaking. That grandfather knew – as I knew – that the bar mitzvah boy could not be ready for what lay ahead. How could any 13-year-old shoulders, only a short time ago lying peaceful and safe in a cradle under a lovingly crocheted blanket, be fully prepared to bear the responsibility of the Torah and its myriad expectations?

Fast-forward a few years, and he'll be standing beneath the chuppah, as women sniffle softly in the audience. They'll sniffle because they know what lies ahead – the indescribable joy of marriage and parenthood, along with the responsibility and apprehension. They'll know that – whatever his age – he is too young to contend with the challenges he will inevitably be called upon to face.

There is sweet, red wine to hearten the new couple at the start of their journey – and to highlight their pleasure at taking on an awesome new responsibility together. If Heshy's heart beats a little faster than usual, it is with excitement and joy as he contemplates a brand-new future, with a brand-new partner to make it shine. The ceremony winds its way to its conclusion, amid shattered glass and cries of "Mazel tov!" And all along, we know – as I knew at Heshy's bar mitzvah – that he is not fully prepared for the challenge that lies ahead.

The people were afraid. But Nachshon – as scared and unready as the rest of them – took the plunge.

There was someone else who was unprepared. Nachshon ben Aminadav, standing beside Moses at the water's edge, stared over his shoulder at the approaching Egyptian army, and then directly ahead at the churning waves of the Red Sea. Talk about helpless and vulnerable... A fledgling nation, the shell scarcely broken around it, was facing the ultimate test of its faith. God said to ignore the screaming hordes that were nearly upon them and to jump into the Sea. The people were afraid. But Nachshon – as scared and unready as the rest of them – took the plunge. He leaped into those waves, with nothing but his trust in God to sustain him.

And God sustained him. As He sustained Nachshon's brethren – all those other Jews who, following his courageous example, took the plunge.

As He sustained the newborn nation, standing later at the foot of Mount Sinai to receive the Law from the mouth of God Himself.

Scared and unready, flustered by miracles and thunderbolts, scarred by prolonged slavery and confused by a freedom as raw and new as pink skin growing over that scar – the Jewish people took the plunge. The midrash tells us that, with each commandment uttered by God, the souls of the Hebrews flew from their bodies and left them lifeless on the ground. Each time, God revived them, until they begged to have Moses serve as God's mouthpiece instead. They feared for their lives – but they adored their Creator. And because they loved Him they pledged Him their obedience, their loyalty, and their very lives, in advance. With one accord, they proclaimed, "We will do and we will hear." We will obey Your spoken Word, and afterwards, if You care to explain it, we will listen.

There were no rehearsals for the event, no warm-up sessions. They were presented with a bald challenge – a simple question: Do you dare?

One and all, they dared.

As bar-mitzvah-boy Heshy, looking so touchingly young in his brand-new suit, dares to accept the Torah's yoke. If his shoulders are not yet strong enough, he has faith that they will fill out and become sturdier. They will be able to bear whatever weight they are called upon to bear. And one day, they will be capable of supporting others, weaker than he.

As every young couple standing beneath the wedding canopy dares. If marriage, and the world of adult responsibility and relationship, is a closed book to them now, they believe that its pages will open to them in time and its message stand revealed. Life and its manifold secrets will unfold, like a many-petaled flower waiting for the touch of the sun – its signal to start living.

None of us is ever completely ready. We're not ready to take our Judaism up a notch, to attempt the next level of observance and commitment. Not ready to test our potential in areas that intimidate us – be it a new job, a new relationship or a new philosophy. Not ready to try and uproot mountains, when the only tool we have is a puny spade meant for digging in the sand and building child's castles to be washed away in the next tide.

Readiness is no prerequisite for growth.

But our illustrious forbears have shown us that readiness is no prerequisite for growth. Abraham was only three when he discovered the existence of God. How ready could he have been, to become a spiritual father to hundreds of souls in Charan, and, in time, to more millions than he could ever have imagined?

And yet, he understood that he was obligated by his newfound knowledge to step into a pair of shoes that must have seemed terribly large for his tiny feet. Abraham became the world's first iconoclast. He dared to start something – something big – something that literally made the whole world what it is today.

I nearly cried at Heshy's bar mitzvah, but Heshy himself didn't shed a tear. This, I think, is Heaven's magic trick: a sleight-of-hand, a happy delusion. While everyone around us may be excruciatingly aware of just how unready we are, we Jews somehow find the courage to step right up to the bat anyhow. We gaze into the waters of a swirling sea that ought to frighten us out of our wits, but we manage to hold onto both our wits and our sense of security, even though we may experience a pang. With trust in God, we hold our noses and take the plunge.

And then, miraculously, the drop is behind us, and we're swimming... walking... running on perfectly dry ground, headed for the Promised Land.

Libby Lazewnik has written numerous books and short stories for both children and adults, published by ArtScroll, Targum Press and Feldheim. She also edits, translates and teaches the occasional class on the fine points of creative writing. She finds food for thought and literature in just about everything. Libby lives in Baltimore with her husband and children.