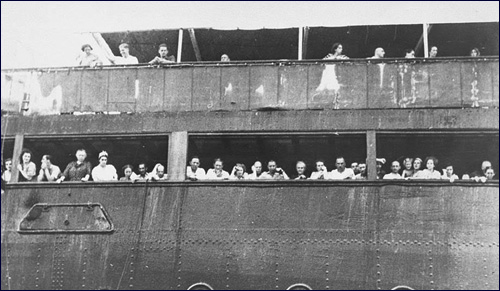 Henry Gallant was a passenger on the doomed SS St. Louis that fled Nazi Germany but was refused entry.

Henry Gallant is one of the few living survivors from the SS St. Louis, the ill-fated ship full of Jews who fled Nazi Germany only to be turned away from Cuba and the United States and returned to Germany and their likely death. A 1974 book, later made into an Academy Award-nominated film, dubbed it the “voyage of the damned.”

Born Heinz Goldstein, Henry is now 86. He was 10 when he boarded the transatlantic liner for Cuba with his parents, Hermann and Recha (also known as Rita). They left their native Berlin and sailed from Hamburg with 934 other passengers, mostly Jewish refugees, on the St. Louis on May 13, 1939.

“On the departure, the orchestra played a very sentimental German song,” Henry recalls at his home in Atlanta, Georgia, where he is retired from the kosher catering business. “The way over to Cuba was absolutely encouraging. People were optimistic about starting a new life and getting out of racially tormented Germany. But the return trip was near panic.”

While many memories have receded after more than 75 years, some flow readily. In his child’s mind’s eye, the cruise seemed a big adventure: a chance to climb into the lifeboats, play hide-and-seek, and go into the captain’s bridge with the other kids on board. Henry also liked the ship’s movies and gala dinners, which kept the adults entertained and hopeful as well.

Some of the entertainment reflected the dark political climate from which the passengers were fleeing. As Henry puts it, “I was told there were games related to the times we were living in.” For instance, the children divided into two groups – one pretended to be gentiles, and the other were Jews. The gentiles were to re-enact German society by saying things like, “You’re Jews. You can’t go in here!” 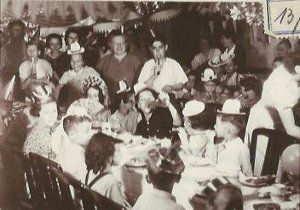 Aboard the SS St. Louis

That also seemed to be the message from Cuba and the United States. No nation appeared willing to save the refugees from certain doom.

Cuba refused the St. Louis entry due to a last-minute decree that refugees needed visas and a $500 bond to guarantee they would not become wards of the island nation. The Cuban government refused to honor the refugees’ landing documents they had bought for an inflated rate ahead of time. Henry believes the German government created an atmosphere of panic, asserting the Jews seeking asylum would take away jobs from the Cubans.

“Unknown to the captain, the ship was merely a pawn of Nazi propaganda,” according to a review of Voyage of the Damned: A Shocking True Story of Hope, Betrayal, and Nazi Terror. The book by Gordon Thomas describes how the refugees on board the liner struggled to survive.

The St. Louis passengers’ last hope had faded. Their plan had been to enter Cuba and await their immigration quota number to enter the United States. Neither country obliged.

Henry remembers hearing that one man had cut his wrists and jumped overboard when Cuba turned away the ship. “That was too much for him. His wife had immigrated to Havana earlier when it was easier to leave Europe and was waiting for him there. A German sailor dove into the water to rescue him. “I didn’t actually see him jump overboard, but I saw the panic that ensued.”

As the world watched, the Jewish Joint Distribution Committee tried to negotiate with Cuba. “These discussions unfortunately failed, as did efforts by JDC to find a haven for the desperate refugees elsewhere in the Americas. After 12 days of waiting, the St. Louis sadly headed back with all of its passengers,” according to the JDC’s website,

“I remember the anxiety that the adults experienced, the constant meetings and constant update on what was being done to prevent a return to Nazi Germany,” says Henry. “Those were bad days. The mood was very somber on board the ship as it returned to Europe. Some of the people had already been in concentration camps, in deplorable situations."

A group of desperate young men plotted to set the St. Louis on fire along the English coast. The English coast guard would have had to rescue passengers and take them to shore. But the plan never came to fruition, Henry says.

The JDC was able to find several countries that would take portions of the refugees: 181 could go to Holland, 224 to France, 228 to Great Britain, and 214 to Belgium. While those countries did open their arms to the refugees after the St. Louis passengers disembarked from June 16-20, all but Great Britain were overrun by the German army.

Henry and the other 150 children from the St. Louis went to one of the children’s homes outside of Paris for Jewish refugees who had escaped Germany, the Oeuvre de Secours aux Enfants homes. His mother, Recha, lived in Le Mans, along with many of the other adult passengers from the ship. After eight to 10 months, she came to Paris to pick him up at the OSE home, and they bunked together under the German occupation for a year. “We wore gas masks and went downstairs for air raids,” he recalls. 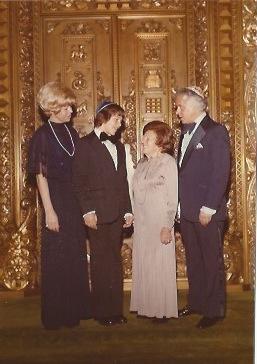 Henry with his mother and wife at his son’s bar mitzvah.

His mother somehow obtained papers permitting them to move to the free zone of Vichy, which was a non-occupied zone. They lived in Nice on the Riviera, where Henry attended elementary school and became a bar mitzvah. The joy of that occasion was short-lived.

Henry relates: “The Germans began rounding up Jews. We were hiding in an attic for a couple of weeks. We managed to find a guide who took us by car to the border of France and Switzerland. We illegally crossed the border in 1942, walked over the mountains and were arrested in Geneva.”

Again, mother and son were separated. The Swiss government put Henry into temporary foster homes and his mother into a resort hotel-turned-refugee camp. Henry found his calling in Switzerland, working in a pastry shop then going to hotel school. By the time the war ended in 1945, Henry and Recha had reunited. “We were mainly concerned if my father would return,” he says.

Nearly 28 percent of the St. Louis refugees are known to have died in the Holocaust. Henry’s father surely was among them. A chemist who had fought for Germany in World War I, he was interned in Gurs, a camp in the Basque region of France, and then deported to Auschwitz.

“I have letters from him. The food was totally inadequate. They were eating nothing but turnip soup. My mother, who was in Nice at the time, sent him packages to help him live. On August 1942, according to the Red Cross, he was shipped from Gurs near the Pyrenees, to Drancy, a suburb of Paris, an unfinished camp with no electricity, water or facilities. He was there four days and deported on Aug. 10, 1942, on Convoy 17 to Auschwitz and never heard from again. My mother had a postcard she sent to a camp where supposedly people found refuge, and it came back marked ‘person unknown.’ I still have that card.”

They decided to begin a new life in America, which now was welcoming Jewish refugees. Henry and Recha sailed for New York on the S.S. America. Trying to break into the hospitality industry, he found some of the hotels in America were “restricted,” with no Jewish employees or guests. “The anti-Semitism hurt my career,” he explains, “and I decided to change my name.”

Henry spent summers in the Catskills and winters in Miami Beach working as a waiter and cook. In Manhattan he rubbed elbows with celebrities as a maître d’ in the Empire Room at the Waldorf Astoria.

Since retiring, Henry has accepted every opportunity to speak about his St. Louis experience and help educate the younger generation. As one of 28 survivors still living, he believes he has a responsibility to help the world remember.

“It’s an epic Holocaust symbol that the world did not come to the rescue of the German Jews. It’s to prevent a repetition of such a tragedy.”

Ghetto Baby: Child Survivor of the Holocaust
Is Grease the Word?
Dried Fruit Compote
Scientific Curiosity and the Divine Encounter
Comments
MOST POPULAR IN Israel
Our privacy policy
Aish.com Is Looking for Great Writers