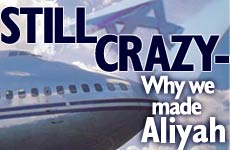 For 2,000 years of exile, Jews had cried and prayed to return to the land. Now we can do it just by hopping on a plane, so why don't we?

I am finally home. I live amongst my own people. I am living the dream. Anew life in the Land of Israel.

Ever since my first visit to Israel back in 1983, I knew that one day I would live here. I visited several times since. Each time as I boarded the plane to return to Canada, I got a sick feeling in my stomach. When would I return? How would I return? How can I leave knowing that so many exciting things are happening in Israel? Somehow, I managed to stifle these questions.

But not for long.

I settled down -- got married, had three children, a good 9-5 job, a mini-van (and second family car), and a modest but attractive home in the suburbs of Toronto, in a thriving Jewish community. I lacked for nothing materially and I was growing spiritually. We had started to keep Shabbat, kashrut and other mitzvot to the best of our ability. But I still did not feel complete.

Every time there was strife in Israel, I watched the events unfold from the safety of my home in Canada. The 1991 Gulf War had a tremendous impact on me. On the first night of the war, I wanted to get on a plane to Israel -- to be part of the trials and tribulations of the Jewish people, and not just an "armchair analyst" 7,000 miles away. I knew that when it was all over, I would not be able to say I was part of it.

At that point my wife and I began to seriously consider the idea of aliyah, "going up," in a spiritual sense, by living in Israel.

We knew it was the right thing to do. For 2,000 years of exile, Jews had cried and prayed to return to the land. Now we could do it just by hopping on a plane. How could we not?

We knew that such a move would be better for us, our children, and even the Jewish people. But it was hard to ignore the "sacrifice" that this move would entail.

The decision was very difficult, and even more so for my wife. She knew that our material status would likely suffer, most definitely in the short-term, and likely in the long-term -- the average Israeli does not have a four-bedroom, two-story house with a front and back lawn, and a car, much less two cars. She worried about not having the support of family and friends. What would happen if and when difficulties set in? Who would be there to help us?

And what about the family we would leave behind? How would we be able to help them, when they need us?

We knew that spiritually, aliyah was the right thing to do, but it seemed to require leaving so much physical and emotional comfort behind. We were forced to confront ourselves and to honestly analyze our most basic Jewish values.

We took the plunge.

Although we have been in Israel only a short time, and we are still getting adjusted, most of our fears have been allayed. I have found employment. We drive on modern highways, and stores are filled with all the name brands. There are many types of communities, and many streams of schools, enabling most people to find their place here. My wife is happy in our community, and with the new friends she is making. We live in a beautiful, bright four-bedroom apartment. Although it is much smaller than what we had in Canada, we feel that our quality of life has increased, not decreased.

Life here isn't as rough as we feared. We may no longer have a basement, mini-van or a dishwasher. But we do have many parks, and other areas where the children can run and play safely all day. My wife can walk around at night without fear. And I can have a cup of coffee on my balcony and enjoy a beautiful, picture-postcard sunset.

And it is profoundly satisfying to live in a place where being Jewish is "normal." On Passover, everywhere we went, we saw people, religious and secular alike, eating matzah. Just last year, while still in Canada, we went to the zoo on Passover and felt so uncomfortable eating our strange-looking matzah sandwiches while everyone else bought their food at McDonald's.

When I first revealed my intentions to move here, almost everyone told me I was crazy -- friends, family, work associates and neighbors. During a brief pilot trip to Israel, I met with Rabbi Noah Weinberg, Dean of Aish HaTorah. In addition to discussing some technical matters, I wanted a "spiritual checkup."

I sat down and said to the rabbi, as if confessing, "I want to make aliyah."

"Rabbi, I'm so relieved to hear you say that! Everywhere I turn people tell me I'm crazy."

"Of course they say you're crazy," he replied. "To be crazy is to run from reality, to run away from true meaning. Everybody does it. But now that you're getting in touch with reality, people perceive that as crazy!"

Rabbi Weinberg explained that Jews have always had ideas that others considered "crazy." We brought monotheism to a pagan world, and guaranteed women's rights in marriage. We brought concepts like world peace, social responsibility and education to the world. They were rays of sanity. But back then people thought we were crazy!

Mark Twain visited Israel in the late 1800s and commented that nothing would ever come of this place. Any sane person would have agreed. Except for the crazy Jews. And today we have a country of 6 million people, with skyscrapers, hotels, shopping malls, yeshivas and schools teeming with young children.

If we pray for the ingathering of exiles so consistently, it may be crazy, but it can't be wrong. And even if everyone around us is saying it can't be done, then it is our job as Jews to demonstrate that with God's help, we can do it.

I don't want to give the false impression that moving here is easy, and that Israel is a perfect country. It is a very challenging process. Yes, there are problems that must be solved. But being involved in these problems is a labor of love when realizing that one is building the foundation for the Jewish homeland.

This promises to be the last and final stop in our journey through exile. In every other place, our investment is temporary. One day, sooner or later, we'll all end up in Israel. It may not be today or tomorrow, but Jewish tradition tells us that in the End of Days, the Jewish people will be gathered from the four corners of the earth, to rebuild the Temple and Jerusalem, to once again become a true light unto the nations.

By being here today, I believe that my decisions and actions can influence that future. It's my way of showing myself, my God and the world that we do really believe in what we are praying for. And that we really believe our dreams will come true.

Even if we do seem a little crazy.

Sol Jakubowicz, along with his wife, Fran, and their children, made Aliyah in 1999 from Toronto, Canada. Sol works in Ra'anana as a Knowledge Manager in Hi Tech and lives in Ramat Beit Shemesh.

Going Up to Israel
Chukat 5782: Let’s Play the Blame Game!
The Sin of Moses: The Two Ways to Communicate
In Aftermath of Chicago’s July 4th Shooting, Local Moms Provide Countless Points of Light
Comments
MOST POPULAR IN Israel
Our privacy policy