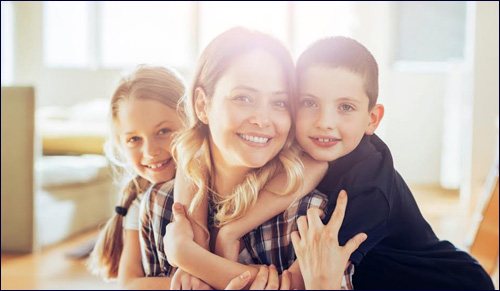 Examining our patriarchal assumptions about which work is important.

The High Holidays are approaching and once again the men will congregate in synagogues, wrapped in shawls, deep in prayer and immersed in holy fervor. The women, or at least the mothers, will stay at home with the children – probably chained to the stove, pregnant, and barefoot. At least that’s the narrative I’m told by those who so sincerely ask me if I mind that my husband goes to synagogue to pray while I have to stay home with the kids.

The implication of the question is: do you mind being relegated to the unholy and unimportant? How do you deal with being so unvalued by your religion that you are “forced” into meaningless and empty labor while your husband gets to do the important stuff?

It’s a loaded question but when you start to unpack it things take an interesting twist. I like to turn the question around. Why would you ask if I mind being “forced” to stay home and not if my husband minds being “forced” to go to synagogue? True or not, if your perspective is that both of us are compelled to our respective positions without regard for personal choice then why question my satisfaction over his?

At this point I am usually treated to a blank stare because it becomes obvious that although the question was meant to be about feminism, it is based on patriarchal assumptions. The only reason that one would assume that the act of going to synagogue is intrinsically more valuable than taking care of children is because the former has been associated with the masculine and the latter with the feminine.

Society has presumed that work to be lesser simply because it has traditionally been performed by women.

Women have not been “assigned” the lesser work. Society has presumed that work to be lesser simply because it has traditionally been performed by women. The question with its inherent assumption is misogyny at its finest, albeit with good intentions. The premise of radical feminism, on the other hand, is that the existing political and social organizations are inherently tied to the patriarchy and in order to truly dismantle patriarchal oppression one would need to challenge the very basis of societal norms and get to the core issues. Asking why women can’t be doing what the men are doing may seem like a feminist question but asking yourself why you think that the work that men are doing is intrinsically more important is, perhaps, the more radical question that needs to be asked if female empowerment is the goal.

This is not to say that staying at home long hours to take care of children is easy and that many women don’t struggle to connect to the loftiness of the day amidst the mundane routine. Although admittedly, amidst diaper changes, tantrums and reading Dr. Seuss for the one millionth time I have, at times, enviously thought of my husband in synagogue, I have never once questioned the intrinsic value and importance of the job I was doing. It is clear to me that raising children and instilling Jewish values is at least as important as prayer.

This isn’t just my own bias or 21st century apologetics. Let’s examine what the Torah says about the inherent value of these two types of work and their differing nature.

Which domain is superior for spiritual cultivation: the synagogue or the home?

In one of the most powerful stories about our first patriarch, Abraham, God commanded him to circumcise himself when he was 99 years old. This was a difficult test for obvious reasons and it also required Abraham to mark himself as being fundamentally different than the rest of mankind. This went against his nature and his dominant trait of kindness, chesed. After this experience Abraham rose to new spiritual heights and merited prophecy that surpassed anything he had previously experienced.

In the midst of Abraham communing with God he sees three nomads traveling though the desert. He immediately asks God if He could “hold on” while Abraham tends to the guests. Abraham then proceeds to engage in the most mundane tasks, from washing off his guests’ feet to slaughtering and serving meat. At a superficial glance, this seems ridiculous. How could Abraham pause mid-conversation with the Almighty, stop intense prophetic ecstasy, to care for three passers-by in the most basic and menial way?

Perhaps Abraham did not consider this decision to be so illogical and irreverent because he realized a profound truth that we are still struggling with. It is certainly holy to speak to God but it is the ultimate holiness to be like God, and the way that we imitate God is not through prayer, meditation or some other lofty spiritual activity but rather through the messy, difficult, painstaking work of nurturing, giving and caring for others. To be Godly is to practice selflessness and patience. Which domain is superior for spiritual cultivation: the synagogue or the home?

It is safe to say that God knows best what each person needs for his or her spiritual development in each unique stage of life. If your life stage and circumstances guide you towards the synagogue then do take advantage and tune into the unique benefits and joys of communal prayer. But if life guides you towards the home and the mundane then do not despair. Jump on the opportunity you have been given and the unique privilege to be emulating God in a profound way. So do I mind staying home with the kids while my husband goes to synagogue? I’ll let you be the judge.

Chayi Hanfling lives in Los Angeles with her husband and four children. She has a Masters in social work and currently works for JAM, a campus outreach organization.

Women on the Bus

Holding Back Our Daughters