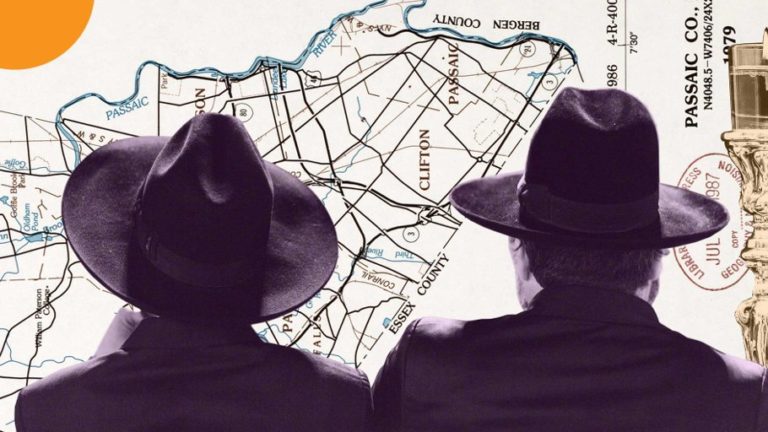 In my New Jersey town, Torah comes before bread.

When I was 6 years old, my father told me a story about a duck.

How can you tell if an animal is a treyfah, unfit, unkosher for slaughter? You can see if it limps. If the animal limps, it is sick and a treyfah. But what about a katchke, a duck? A duck’s normal gait is to waddle. So you must put the duck in a stream. If it goes with the flow, downstream, one cannot tell. But if the duck fights the current and swims upstream, then you know the animal is kosher.

This, my father said, is also the sign of a Jew; a Jew swims against the current.

Today, for me, this parable pertains to Passaic, the New Jersey town in which I live. Passaic is seven miles upriver from Newark, which 70 years ago was a Jewish stronghold immortalized by Phillip Roth. In his early masterpiece, Goodbye, Columbus, the Patimkins and their like from Newark went downstream, to Livingston and Verona, toward success – but, from a religious point of view, unexceptionalism and assimilation.

Upriver, in Passaic, however, Torah was put before bread, before material success. The yeshiva – Yeshiva Gedola of Passaic, as it is officially known – was established in 1973. Headed by Rabbi Meir Stern, the school both anchored the neighborhood and stimulated its rapid growth.

In this town, the bais medrash, the shul, never closes.

This phenomenon, this oddity, this mixed-up order of sequence – Torah first, then bread – colors the nature of the community. Passaic is not a place where religion is relegated to tottering grandfathers in skullcaps and with snuffboxes who loiter in the synagogues lamenting the loss of Jerusalem. Rather, it is a place where, instead of men in gray flannel suits lunging for the 7:54 to the city, you will see men in their prime, engaged in religious practice and the study of Talmud at high noon and every other hour of the day. In this town, the bais medrash, the shul, never closes – it stands as a visible reminder of the eternal Jewish God.

I did not always appreciate this about Passaic. On the contrary, when I came to this town almost 20 years ago, I was struck by its relative ugliness, compared with, say, another nearby Jewish community in northern New Jersey, Teaneck. Inside, I ridiculed its provinciality, its bedroom-size aspirations and (what seemed to me) pint-size expectations. The main strip of Passaic is particularly ghastly with two-story walk-ups and storefronts, a faded Dairy Queen, an abandoned dry cleaners, and not a tree nor shrub anywhere.

Passaic even had a vaguely communist feel – as if it had been ordained that every citizen would be given a 30-year mortgage and own a small plot of land to grow green vegetables and potatoes. My wife, a novelist, joked that if she achieved the Holy Grail in fiction, say getting a story published in The New Yorker, nobody would ever know because no one in this town reads that magazine.

But slowly, almost against my will, Sabbath by Sabbath, Passaic worked its magic.

Already by Friday late afternoon, things get quiet on the main street. By candle-lighting, when shul calls the faithful, the men in their dark suits and fedoras are lit up by the green glow of traffic lights and the fluorescent flicker of late-night gas stations. Some do not merely go to services, they go to study or to hear a complicated discourse from the rabbi. And it is the women, unseen, at home, who not only do not object, they make it happen. In the words of the Talmud, they urge their sons to synagogue and wait patiently for their husbands to return from the house of study.

In my corner of Passaic, on Sabbath mornings just after sunrise, the Torah is read. A small group sits around Chaim, a man with the body and gait of a fair-size bear and the high handsome forehead of the wise and kind. Next to Chaim, the books are piled high. Maimonides, Nachmanides, the Ran, the Rosh, the medieval explicators of the Talmud. With the humility of a day laborer and the visage of a man who obeys God (he is not a rabbi) he will patiently “report” to you on the clash of the “giants” on the issue of circumcision: Are only Jewish descendants of Abraham part of the circumcision covenant or are also other children of Abraham part of the agreement as well? The respective verses in Genesis and Leviticus seem to contradict each other. After everything has been thrown into the air, he will bring down the rulings of the Shulchan Aruch and the later sages and reconcile them with more proofs, passages, and precedents.

It isn’t easy work, to grind out the law, and the discussion can go for an hour and a half or more. Time itself seems folded into the eternal present on Sabbath morning. Nobody seems impatient or in a hurry to go anywhere, even as it all takes place before anyone’s had a proper meal.

The odd thing is that not all of the Passaic people grew up with Torah.

How did this group and many other groups in Passaic just like this one come to be? While many people love to hear and study the stories of the Bible and most like to hear a good sermon, this “muscular” Torah of Chaim and these other groups is different. From what underground tribal river does hunger for this kind of Torah come?

The odd thing is that not all of the Passaic people grew up with Torah. On the contrary, Passaic has a bit of a name as a place for baalei teshuvah, people who have “returned” to the faith. I could count more than a handful of them as “Russians” from the former Soviet Union. Refuseniks in a different sense, they had said nyet to a lot: They had rejected the secularism of their parents, their country. My chevrusa Moishe, my study partner, too, had said no. His father was in the movie business in Canada – a very Jewish Jew, but a distinctly nonreligious one. Among the residents in Passaic are children or descendants of the greats of American showbiz and theater, the likes of Hammerstein and the folksinger Oscar Brand and others.

The places in which I lived as a child – Atlanta, Montreal, Queens – were older Jewish communities, formed around a natural or economic resource: a lake, a harbor, a river, or an industrialized city. At first, the struggle for bread had to predominate. Then, as that struggle was gradually won, a community developed, a shoikhet was hired, and a rabbi; a proper mikveh was built, and the study hall or small Talmud Torah might in time become a full yeshiva. Many of my friends’ parents, were ibbergeblibener, survivors of the Holocaust. They had been teenagers during the war and because their education was disrupted, even the pious among them were very far from learned. What’s more, they, as first-generation Americans, were consumed by the need to put bread on the table. Shul was strictly for services, and then the doors were closed. In these communities, bread was first, way before Torah. And certainly “Chaim’s Torah” – the Torah of “hairsplitting” – was as far from them as the moon. As for me, even as I was used to pilpul, the hairsplitting Talmudic discourse from the yeshiva learning of my youth, I found the lessons too complicated, too dissociated from real life. I ran away from the words written on parchment to words that were written on soul; this is how I became a psychotherapist.

Yet, in Passaic I saw over time how people would come to shul, to Chaim’s group and many others, as if they were going to the town well to draw from the waters of the Torah, to study again and again. Chaim, an actuary by trade, believes in his soul that Toyreh is di beste skhoyreh, Torah is the best merchandise, and so the words that come from his soul also enter ours. In a way, he made me into a baal teshuvah, too.

In Passaic, the tide goes upstream, the hunger for Torah comes before bread.

After the destruction of the second temple in 70 CE, and for the next 20 centuries till today, Jews, the descendants of Abraham, Isaac, and Jacob, lived dispersed among the nations, sometimes bereft of possessions and dignity. Yet we took with us the key to our existence as a people: our ability to be present with our God and the vitality to interpret and observe the law that Moses handed down to us at Sinai.

It is a covenant with God that has enabled a weak and homeless people to survive the great empires of Egypt, Babylon, the czars, the Crusades, and the endless temptations of the honeyed fleshpots of France and America, and has caused our sacred books to sway half the world.

There is not much to say about Passaic from a secular narrative; in fact, I have dubbed it “Prosaic” for its shopping malls and service stations, its comatose Jersey sprawl, but in the realm of religion, there is excitement and unique life here. When I walk the empty streets on Sabbath morning, one can feel that the culture of study predominates. Behold the days are coming when I will send a famine to the land, but the people will not hunger for bread nor will they thirst for water, but rather they will hunger to hear the word of God. Poetry, metaphor perhaps in most places, but in Passaic, the tide goes upstream, the hunger for Torah comes before bread.

The History of Hanukkah They Didn't Teach You in Hebrew School
Can You Show Me This "God?"
How to Become Immortal
Judaism and Mental Health
Comments
MOST POPULAR IN Israel
Our privacy policy
Aish.com Is Looking for Great Writers