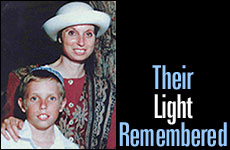 My husband's cousin was visiting us from Canada, enjoying our six young children, spinning their 'svivonim' and eating latkas (or 'levivot', as my Israeli-born kids refer to them).

The phone rang. It was my husband's friend, Jack, who asked in an agitated voice if we were all home.

He sighed, "I just heard first reports that a family with many children has just been shot on their way home to Beit El. I had to see if you were all right. May we only hear good news."

I had barely given over the gist of the conversation, when the phone rang again. It was a neighbor and long-time resident of our community.

"It has not been released to the press yet, but the Tzur family was attacked on their way home from visiting their relatives in a near-by Yishuv. Efraim, their 12 year old son, was killed immediately. Ita, the mother, was shot in the neck, and three girls in the car, were injured. They are in surgery now at Hadassah Hospital. The father is only slightly injured. Please say Tehillim (Psalms) for the recovery of the mother and three daughters."

Again, I barely got the story out, and my two oldest had just picked up two volumes of Tehillim, when my friend called back with more bad news. Ita, the mother had died in surgery. Her daughters had not yet been told.

The next scene at home was one I had never been prepared for. Regardless of the 'How to raise your kids' pop culture books I loved reading, my years of experience, and advice gathered from other mothers in the playgrounds, I had no training as to how to react to my kids. My oldest daughter, nine years old, began crying, "It's not fair! They think their mother is still alive, but WE know she isn't! It's so sad, Ima!"

My 11-year-old son's response was even more difficult for me. "I HATE those Arabs that killed them. THEY should be killed!" he said, with a young face twisted in anger.

I stood there, just wondering what to do. I spoke, only half-believing what I was saying. "Kids, we were asked to say Tehillim for the girls. They need a full recovery. Why don't we do that now?" and I took a volume of Tehillim, too.

Even though I spoke Hebrew fluently and had been in a religious community for over 15 years, I had not attended any classes dealing with the tradition of reading Psalms written by King David. I had never felt the interest or need to read them. I almost felt as if I were in a play of a devoutly religious woman who, with total faith, was encouraging her children to carry on her tradition. I had no tradition. This was so new and foreign as a concept.

I sat on the sofa, looking at my young children sitting at the dining room table. They would read a chapter, and then speak to each other. My son in a monotone, shock said, "Efraim was the boy who would choose who got to sing at the end of the morning services. He was always so nice to the younger boys. Ima, he wasn't even a Bar Mitzvah!"

I close my eyes and think about the eternal little light our people has carefully nurtured through the darkest times of history.

Through tears, my daughter choked on her words, "I saw him playing tag with his sisters in their front yard a few days ago. Ima, he didn't know he would be dead today, on Chanukah!"

And then they would go back to reading. I began to read. I became aware of the unity I felt with my children, without having to answer them or say anything. And my consciousness widened to include my entire community that was reading these same Tehillim at that moment. And I thought of the generations of suffering during which my People turned to these Psalms. Regardless of my lack of Jewish background or understanding, I felt solid and sure of my action. And even as we waited to hear about the Tzur family, I felt the small light of Chanukah reminding us all why we are here. Can such a small light cast off the darkness?

Ten Chanukah celebrations have passed, and we are bringing out the menorahs, potato graters (or in my case, a new food processor) and chocolate 'gelt'. It is such a fascinating and happy family holiday, but it is bittersweet for me. I imagine the Tzur family putting their Yizkar memorial candles along side their Chanukah lights. I wonder how those little girls did growing up without their mother. I think about the "Middle East Peace process." Everything seems dark. I close my eyes, I think about the words of the Ma'oz Tzur (Tzur! Just like the name of the family...) and I think about the eternal little light our people has carefully nurtured through the darkest times of history.

I am filled with a light of gratitude for the honor of being a "Yiddishe Mama," and I write this so all of us can remember Ita and Efraim Tzur, may their blood be avenged.

Night of the Sirens

Israel's Bride
In the Shadow of David and Goliath
Where Do the Laws of Nature Come From?
Saadiah Gaon, Rashi and Maimonides: How Three Rabbis Revolutionized Judaism
Comments