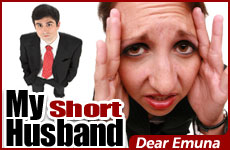 I'm ashamed to admit it but my husband's short stature bothers me.

The nature of my question makes me a bit ashamed to share. However, I know the only way to learn is by being open and honest. My husband is good hearted, kind and hardworking. He is also...short. Yes, short. I appreciate and respect him and have feelings for him, but time to time his short stature bothers me. I know I sound so shallow and I generally am able to get beyond silly externals and appreciate people for who they are. How can I shut out these bad thoughts of dissatisfaction? Thank you in advance.

Well, I am a little confused by your question. Didn’t you know your husband was short when you married him? It’s certainly not something he can be accused of hiding from you. If you have a husband whom you appreciate and respect, you need to let go of this issue. I can only assume that you’re allowing yourself to be affected by the world around you – by media images of men and perhaps even by the look of your friends’ husbands. This is a destructive path. Jews marry for good character traits and shared goals.

If you were on your second date and his height bothered you, I would still probably tell you to probe deeper but I would be more understanding if you determined it was just an issue you couldn’t live with. But you’re not dating. You chose to marry this man. You saw his good qualities and you recognized his physical stature for the non-issue it was. You made a commitment and you need to stick to it. Ignore that inner voice. Yes, you do sound shallow, but I am confident that with very little effort, you can rise above this position.

We have a problem with my mother who is in her early 80s. She refuses to bathe. My siblings and I have spoken to her about it repeatedly and she refuses. She will not change her clothing either. Weeks will go by and she will finally get into the shower, but then she puts the same filthy clothing on. This woman has money, new clothing and can afford the water. She cannot see to drive anymore but can do close-up work and sees well enough to take care of herself and cook at home, so it is up to us to take her to the store, the doctor or where ever else she needs to go. She becomes angry when we raise the issue about her smell.

Do you have any suggestions? We have already threatened to not take her unless she bathes. It is so bad sometimes that strangers will comment "what is that smell?" She will not let someone in if we hire them to come to clean, and if we try, she yells. My sister is the one who lives very close to her and they are constantly in a battle over it. What can we do? We don't want to be with her because of this. Even the children are revolted by it.

I understand that you are in a tough position and you and your sister deserve praise for being sensitive children in addition to having sensitive noses. I confess to having no experience in this area so I did a little research online. The first thing I discovered was that this is actually a fairly common problem. While that piece of information doesn’t solve the situation, it should be comforting to know that you are not alone in this – and neither is your mother! Initially she should be checked for depression. Perhaps she doesn’t feel there’s anything or anyone to get bathed and dressed nicely for. Perhaps she feels discouraged about her future in general and this is just a physical manifestation of it. Discuss this with her doctor (since you take her to the appointments anyway).

You mention taking her to appointments or the store or places she “needs” to go. Do you ever take her places she might enjoy going? Maybe a concert or a play or a movie or out to dinner. Any one of those events could possibly spur her to make more of an effort with her physical appearance.

Additionally, sometimes it’s an issue of control. So much has been taken away. This is one of the few areas where they can still be in charge so, as negative as it is, this is where she can assert her will. Pursuant to this, the more you nag, the more she will resist. Perhaps ignoring it will help. She won’t feel she has to refuse to bathe in order to prove her independence. Try to resist giving her advice or telling her what to do.

You may need to accept the smell, unpleasant as it is, since your constant nagging is only damaging your relationship further.

So, what can you do? If she won’t take help, that possibility is off the table, although perhaps a really experienced care giver can bring her around. If the doctor determines that there is some depression, perhaps medication will be of assistance. In addition to your taking her out, you could call a friend of hers and suggest that she drop by and arrange a “girls’ day out.” That may motivate her to shower and change. Please make sure she has shower chairs or safety mats or anything else she needs to make the shower situation totally safe. Don’t consult about that; it will be embarrassing. Just install them in a very no-nonsense, matter-of-fact way. Don’t get into a power struggle; just set up the conditions for bathing and leave the choices up to her. It’s out of your control anyway.

Finally, you may need to accept the smell, unpleasant as it is, since your constant nagging is only damaging your relationship further. Focus on the love you have for the mother and the gratitude you owe her. And maybe buy her a present of her favorite perfume – along with some makeup and other treats (after a few visits of not mentioning her smell) and have a spa day (maybe bring over a hairdresser and manicurist) so that she will feel special and worth taking time over.

Can My Marriage Be Saved?

Please help. My husband and I got into an argument two months ago which caused him to drive three hours away to his parents’ house. The next morning, he was at a divorce attorney’s office with them, and hired one on the spot. Within two more days, his parents bought him a $25,000 car, had him cancel any credit card I was connected to, had him open a new bank account, opened a P.O. Box for his mail, and arranged to have our mortgage bill sent to them so I couldn't access it.

My husband is 28, I am 24, and we have two children together (a 3 year old and a 2 month old). We have been so in love for the last 7 years (with a two year gap, in which case his parents split us up back in 2006 as well). They have never really liked me, but accepted me, and at the first sign of a fight they took the line and ran across the country with it, trying to get him free of me. We went to a marriage counselor and she had explained to us both that he has a passive personality, and that I am the dominant one in our relationship, but that my husband relies on his mother’s opinion way too much. His parents still treat him like a little kid, and in order to not upset them he does whatever they say (especially since they control him with money).

We recently had a wonderful weekend vacation (without his parents knowing of course) where he finally opened up to me and started to love me openly again. Then we came home and he left for a work trip and is back to the "one step at a time" phase. I feel I am in a battle of me vs. his mother and the prize is my husband. I'm not sure what to do anymore, and if this battle is even worth fighting if he will ultimately choose her in the end? He loves me, I know he does, but does this type of personality rely on his parents too much to care what's best for his heart?

I’m sorry to say that you have a real mess on your hands and there’s only one person that can solve it. Unfortunately that person is NOT you. Unless your husband can make a clear break with his parents so that he can get his act together and your relationship can grow strong, I don’t think there’s much hope for your marriage. It breaks my heart to say this especially since there are children involved, but this on-again, off-again pattern is certainly not healthy for them – or for you.

In order for your relationship to have any chance of success (assuming your report of the situation is accurate), your husband needs to cut off all contact with his parents. It is possible that, at some point in the future, when your husband has greater clarity about appropriate boundaries and a stronger sense of commitment (I would definitely recommend he go for more therapy), you can slowly begin to allow some limited contact. But not now. Based on your description of the situation, your relationship cannot and will not survive his parents’ continued involvement and interference.

If your husband won’t (or can’t) stand up to them (and given the scenarios above I confess to being doubtful), I am not optimistic about your future. Pray to the Almighty for clarity in decision-making and, if necessary, for the strength to walk away.

Divorce or One Last Chance?

Differences: Source of Conflict or Appreciation?