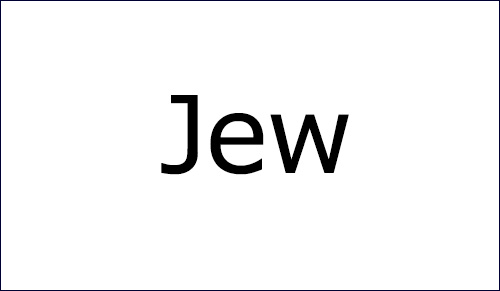 Can the Holocaust be told using just one word: Jew?

It’s very rare for a Jewish book to be covered as a front page story in the New York Times. But that’s just what happened a few days ago to a highly unusual publication about the Holocaust.

And frankly, I am appalled.

I’ve read many Holocaust books. I’ve taught Holocaust classes. I’ve been in the forefront of those who preach the need never to forget the unspeakable crime of the 20th century. I’m committed to the importance of reading about the horrors of Nazi genocide, no matter how personally painful it is to confront the details of this terrifying tragedy. But it is beyond my comprehension to become aware of an attempt to tell the story in a way that echoes the very crime it is meant to condemn, in a sense to perpetuate the mindset that permitted the Shoah to happen.

The book is predicated on a gimmick. In its 1250 pages, there is no plot, no narrative, no characters and in fact no words other than one. The word is “Jew,” and it is repeated six million times. That is all. Nothing else. Turn page after page and you have what is meant to serve as a reminder of every one of the victims. And, as the publisher hopefully puts it, readers will gain some idea of the immensity of the loss of all those who perished.

These unique, irreplaceable human beings have become nothing more than nameless, faceless objects on a lengthy list.

And what is missing, to my mind, is the most important point of all: the names of these victims. They nowhere appear. All that readers are left with is the supposed impact of the number six million. The book implies that every one of them is meant to be suggested just by the word Jew. And so these unique, individual, distinctive and irreplaceable human beings have become nothing more than identical objects on a lengthy list, nameless and faceless – the very goal of their executioners who systematically replaced their victims’ names with tattooed numbers which identified them only as Jews.

It is a fascinating aspect of Jewish law, whose source is in the Bible itself, that when taking a census Jews may never be counted by number. Indeed, to this day, when needing to ascertain whether there are in fact 10 Jews present for a prayer service, we are not permitted to count those who are present as one, two, three, etc. but rather by way of a biblical verse consisting of 10 words - all so that we not diminish the concept of individual uniqueness.

That is why any attempt to understand the Holocaust by way of the immensity of the number of victims is not only certain to prove ineffective but also self-defeating. It is a remarkable truth that probably the most powerful impact on the world’s conscience and consciousness of the Holocaust was the Diary of Anne Frank, the story of one young girl with whom everyone could identify rather than any list with no personal meaning.

And that is probably why the most moving of all the exhibits at Yad Vashem, Israel’s Holocaust Museum in Jerusalem, is in the wing known as the Hall of the Children. The darkness is claustrophobic and frightening. The only light comes from blinking stars in the ceiling, symbolic reminders of the children who perished. The only sound that is heard is a recitation, not of prayers, but of names – an endless list of infants, children, and teenagers, whose only legacy is the name they were given at birth. To stand for a time and listen, to meditate and realize that every name was a person as precious to their loved ones as our children and grandchildren are to us is to recognize in yet another way that the phrase “six million” hardly begins to describe the loss of the Jewish people and the world.

To repeat the word “Jew” six million times is to turn people into numeric abstractions, unique souls into identical cookie-cutter constructs with no thought for the remarkable and exclusive potential of each one of their lives whose loss impoverished all of mankind.

The author and publisher, committed Jews who do so much for the Jewish people, certainly have good intentions. But to me this approach feels eerily like the ideology where each of us is described simply as “Jew,” the first step in turning us into faceless victims.

Agree or disagree? Let us know what you think in the comment section below.