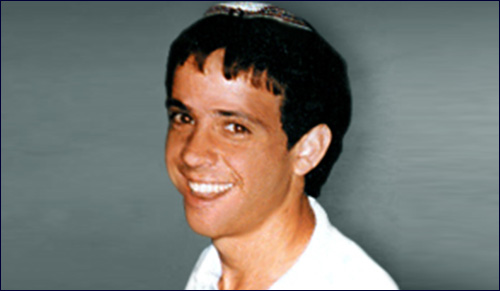 Nineteen years ago Nachshon Wachsman was kidnapped by Hamas terrorists.

My husband was once asked what was the most difficult prayer service he ever led. He had no hesitation in answering. It was the time when our community, together with Jews in Israel and all over the world returned to their synagogues on Friday night after the Shabbat meal to pray for the safety of Corporal Nachshon Wachsman, one of our neighborhood sons.

Nineteen years ago, on October 9th, 1994, Nachshon Wachsman was kidnapped by Hamas terrorists while hitchhiking home from his army base. The driver and passengers in the car all wore kippot, there was a siddur, a prayer book, on the dashboard and Chassidic music wafted from the car radio. Wachsman no doubt felt it was a safe car to get into.

On the 3rd day following his assumed abduction a news agency received a video of Nachshon and his kidnappers demanding the release of Sheikh Ahmed Yassin and 200 other terrorists currently in Israeli prisons in return for Nachshon’s release. “If their demands are not met,” Nachshon read at gunpoint, “they will execute me on Friday at 8 pm.” 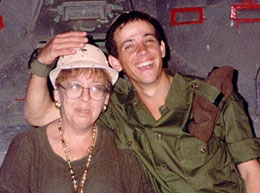 Nachshon with his mother Esther.

That was the first time his family and the world knew for certain that he had been kidnapped.

From that moment the Wachsman home became a center of media attention, as high brass army personnel came and went throught t heir front door. Days went by and no news was heard. Yehuda and Esther, Nachshon’s parents gave countless interviews, their steadfast faith in God shining through their pain and prayers as they begged every world leader to put pressure on Hamas to release their son.

On Thursday night 100,000 people, Jews from all walks of life, gathered at the Western Wall to beseech the Almighty.

On Thursday night 100,000 people, Jews from all walks of life, gathered at the Kotel, the Western Wall, Judaism’s holiest site, to beg, plead and beseech the Almighty to save the life of this dear, young, brave and innocent Jewish soul.

Jewish women the world over were asked to light an extra candle for Nachshon when they lit their Shabbat candles and thousands of women lit Shabbat candles for the first time ever that week so they could add the extra light.

At about 5 pm on that Friday afternoon we received telephone call. A voice requested that anyone not directly involved in Shabbat preparations should immediately start saying Psalms, as the elite army unit was going to storm the house where Nachshon was being held. As the tears streamed down my face I could only think “Who is like your people Israel?” A top secret military operation was about to take place and telephone calls were made to every local household and yeshiva knowing that this was a ‘safe’ thing to do and wouldn’t compromise the security and secrecy of the operation.

In tears and with shaking hands I lit the Shabbat candles, including the extra one, and my husband went to shul. There was still no news on his return but he said that the community had been asked to return to the shul after their meal and he had been asked to lead them in Psalms.

Hundreds of reporters gathered outside the Wachsmans’ home just a minute’s walk from the shul would later marvel at the sound of the loud singing of Shabbat songs they could hear coming from inside the house. They couldn’t understand how a family whose son’s life was hanging in the balance could sing – but then they didn’t fathom, the unshakeable faith that was an intrinsic part of Yehuda and Esther’s characters.

We returned to shul together with the Wachsman sons, the parents having been asked by the army to remain in their home. The shouts, cries and sobbing of a community begging for the life of one of their children were broken when several army personnel entered and signaled to the Wachsman boys to leave the shul and come with them.

Our hearts stood still. The silent intrusion and removal of the brothers did not seem to signal a successful end to the rescue mission. But even though we realized that it probably hadn’t been a total success we didn’t know at that point that Nachshon and the leader of the rescue operation Nir Poraz were both dead.

We continued our prayers hoping that the worst scenario was that we were praying perhaps for the health of an injured Nachshon. Several more hours hour passed before we were officially told what had happened.

At midnight on Motzei Shabbat, we all gathered again, together with hundreds of thousands of people from all over Israel, this time at Mt Herzl Military Cemetery, to bury Nachshon.

The unheard of unity this young soul had managed to bring about in Klal Yisrael was seconded only to the Kiddush Hashem, the sanctification of God’s Name, that his father Yehuda brought about when his thoughts and worries were transmitted during the funeral.

Our prayers did not go unanswered, he explained, but this time, for reasons we humans cannot understand, the answer was “no.” But those millions of prayers uttered during the last week on his son’s behalf, were not in vain, nor were the tears shed pointlessly. Tears are never wasted. We don’t know when God will use them to save another soul.

How many times since that tragic, unforgettable week have I quoted Yehuda Wachsman’s words, often to myself? No we don’t always get what we pray for. We may not know if what we want is really the best for us. But, like Yehuda Wachsman who accepted the ultimate ‘no,’ we have to accept that we don’t make that final decision.

Michael Levin: An Israeli Hero for Our time
Is Grease the Word?
Dried Fruit Compote
Scientific Curiosity and the Divine Encounter
Comments
MOST POPULAR IN Israel
Our privacy policy
Aish.com Is Looking for Great Writers