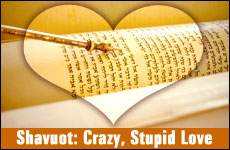 Staying up Shavuot night teaches us what Torah study is all about.

Shavuot never had the marketing potential of the others Jewish holidays – no matzah, no colorful candles, no lulav, no shofar. As a result, it is the least known of the major Jewish holidays. It has no symbol, nothing to recommend itself and capture the imagination.

Shavuot doesn’t even really have a name. The word “shavuot” means “weeks” – a reference to the weeks we spend counting up to the holiday (see Leviticus 23:15-16). Thus, Shavuot itself – the day we count to – didn’t even merit its own name.

What is different about Shavuot that it has so little by way of concrete ritual and symbolisms? What is the meaning behind this overlooked little holiday?

One of few customs we do have on Shavuot is staying up all night studying. The classic reason given for this is because on the morning of the revelation at Mount Sinai the Children of Israel overslept. God descended onto the mountain to give us His Torah but we hadn't yet arrived! Moses had to rouse us from our tents to bring us to that climactic event. To make up for our failing, we stay up the first night of Shavuot every year to make absolutely certain we will be awake already in the morning.

Anyone who has experienced the night-long study of Shavuot will recognize the irony of this reasoning. Look around the synagogue when that momentous event is recounted during the Torah reading – and half the synagogue is asleep! In our eagerness to atone for our lapse at Mount Sinai, we undertake a practice which almost certainly guarantees we will not be more than semi-conscious the morning of the big event. Why take on a practice so seemingly irrational and counterproductive?

Many years ago, when I was a student in yeshiva, I remained in yeshiva well into the summer after most of the boys had left. A friend of mine, one of the top students, asked me if I could stop by his room every morning to wake him up (I used to wake up early myself). His roommates had all left for the summer, and he was concerned he wouldn’t wake up in time for morning services. I began regularly stopping by his room on my way out. Every other day I would find him collapsed into his bed – often still dressed – with his shoes and glasses still on, the light never turned out. Clearly, he had spent the night studying until the brink of exhaustion, at which point he retired to his room, collapsing straightaway into bed.

That fellow was not just a diligent rabbinical student. He was a man crazy in love.

That fellow was not just a diligent rabbinical student. He was a man in love.

When God revealed Himself to Israel at Sinai, it was not just to overawe us with His power or instruct us in His commandments. It was a marriage. The Sages often describe the Revelation at Sinai as a wedding. God was the groom; we were the bride. The mountain held over our heads was the wedding canopy. God was not just giving us commandments to perform, a means of earning reward for our good behavior. He was offering us an eternal connection with Him.

And at the time, the nation could not get enough. Mount Sinai had to be cordoned off so the people would not break forth in ecstasy, rushing up the mountainside in their burning desire to get closer to God. They had to be warned and warned again not to leave their stations (see Exodus 19:12-13 & 21-24).

The Torah was the symbol of our bond, the gift God granted His betrothed to consummate their relationship. The Talmud (Brachot 57a), discussing the verse “[the Torah] is the heritage (‘morasha’) of the congregation of Jacob” (Deut. 33:4), comments, “Do not read “morasha” (heritage) but “me’orasa” (betrothed). We are wedded to God. And as a result, we are wedded to the Torah, God’s wisdom.

Torah study is our way of gaining a connection with God, of forging that love-relationship. It is not just a law book, containing a list of dos and don’ts; it is God’s wisdom, His values. By studying Torah we gain a better understanding of our Creator and build a relationship with Him. The Torah is not only wisdom for living in this world – although it certainly is that as well. It is a means of transcending this world, of glimpsing the infinite, the myriad spiritual layers beyond the physical. Studying Torah is a reenactment of the revelation at Sinai, allowing us to once again connect with the Almighty, increasing both our love for Him and His for us.

We thus study Torah as a means of building our love-relationship with God, to better know our God and understand His ways. And you know something? When people are in love they sometimes do crazy things.

Is it normal to stay up way too late at night studying Torah? Of course not. Will a responsible person make sure to get a good night’s sleep? Sure. But as we all know, if you’re really in love, once in a while you’ll do something crazy for your beloved.

A Jew who truly loves Torah will at times just not be able to close his Talmud. He just has to finish this topic. He cannot go to sleep at night without understanding God’s word, with a lingering question he cannot resolve. Is it right to at times stay up in study until you collapse from exhaustion – as my friend of so many years ago? Perhaps not. But if a person never does it – he is never so wrapped up in his studies that he’ll do something “stupid” in his quest for wisdom, then something is just missing. He may be an accomplished Torah scholar, but he is not truly in love.

On Shavuot we are in love. Crazy, stupid love.

We stay up Shavuot night because one night a year we make precisely that assertion: God, You have granted us the ultimate gift of your Torah and we are crazy about it. We want to understand You and know Your ways. And we will go to every length to get there. The rest of the year we will be normal and live with the proper balance, but this one day of the year we cannot get enough.

This is why Shavuot contains no symbol, no special commandment to observe. On Shavuot we are not celebrating a specific concept which can be symbolized – such as the freedom of Passover or the shelter of Sukkot. We are celebrating us – our very relationship with God. We can understand our God and connect with Him. And we are overwhelmed by the opportunity God gave us for such true fulfillment.

Finally, Shavuot has no name. Its “name” refers to the weeks we spend counting up to the revelation at Sinai. This is because we recognize that the relationship we have with our God is built upon the effort we put in beforehand. The extent to which we can connect with God on Shavuot depends upon the sum total of study and preparation we have done beforehand. Our connection to Torah does not come overnight. It is the culmination of everything we have made ourselves up until that fateful day.

On Shavuot we celebrate God’s ultimate gift to Israel, the very means He gave us for growing closer to Him. We recognize just how special that gift is, and how loving God was to have granted it to us. For on Shavuot we are in love. Crazy, stupid love. 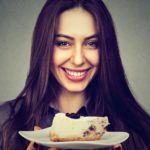 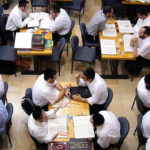 Up All Night3 min read 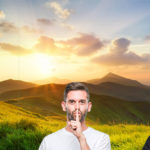 When All Went Silent4 min read