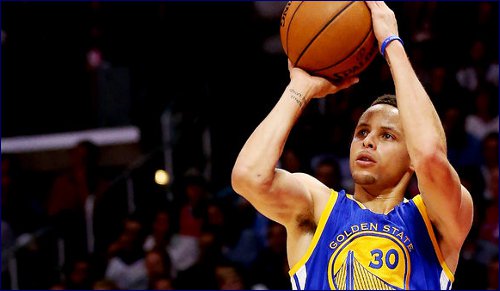 Forget the moment of glory. Real success is built on daily consistent choices.

What does one of the best NBA basketball players on the planet have to do with the upcoming holiday of Shavuot?

Stephan Curry captured the imagination of die hard and novice fans alike. His almost magical touch from beyond the three point line and skilled handling of the ball transcends the norm. He led the Golden State Warriors to the best record in the NBA and back from a 3-1 deficit in the Western Championships into the NBA finals.

Curry’s work ethic offers a window into one of the most important messages of the upcoming holiday of Shavuot. The name of the holiday, translated as “weeks” does not describe the seminal event of the revelation of the Torah; it focuses on the build up to the day. There is no holiness without preparation. We cannot simply celebrate the gift of the Torah without the daily dedication to be worthy recipients. An Olympian prepares years for one moment of glory. In the spiritual realm, if we truly want to grow and embrace the Torah as a living guide for life, we must develop habits of spiritual growth each and every day.

Shavuot is not a one-day, climactic event; it’s a culmination of prior dedication and devotion that expresses itself day in and day out.

The least recognized player there was Stephen Curry, but I knew that he was going to be an NBA superstar.

In the world of basketball, Stephan Curry reflects this ideal. His success did not happen overnight. Alan Klein, one of most esteemed strength and conditioning coach in the basketball world, remembers Steph at 16 when he worked with him as part of the first ever Kobe Bryant Nike Skills Academy. He writes, “The least recognized player there was Stephen Curry, but I knew immediately that he was the most impressive and that thinking long term, he was going to be a future NBA superstar, and here’s how I knew that: it was all because of his work habits.

“When most players were still in their flip flops, Stephen Curry had already started doing some form shooting. By the time the workout officially started he’d probably already made 100-150 shots, almost in a full sweat. He made sure that he had perfect foot work, he made sure he had perfect shooting form. If he did anything and it wasn’t perfect, he did it over again, and he didn’t need a coach to tell him, he just did it.

“The moral of that story is that success is not an accident; success is actually a choice. Stephen Curry is one of the best shooters on the planet today because he has made the choice to create great habits"

Klein concludes by asking, “Are the habits that you have today on par with the dreams you have for tomorrow. That’s something you need to ask yourself every single day. Because whatever you do on a regular basis today will determine where you will be tomorrow.”

What are we doing today and every day spiritually to determine our tomorrow? Take a lesson from Steph. Develop holy habits. Success is not an accident; it’s a daily choice.

Thank you to Rabbi Yisrael Motzen for his inspiration.

Rabbi Daniel Cohen has served in the rabbinate for over 20 years and currently is senior rabbi at Congregation Agudath Sholom in Stamford, Connecticut, the largest modern orthodox synagogue in New England. A husband and father of six daughters, he is also co-host with Reverend Greg Doll of the nationally syndicated radio show, “The Rabbi and the Reverend,” on Sunday mornings at 11 a.m. and evenings at 9 p.m. He speaks frequently on leading a life of legacy, and is the author of the new book, “What Will They Say About You When You’re Gone: Creating a Life of Legacy” (Health Communications, Inc.). For more information, visit www.rabbidanielcohen.com.

When All Went Silent

Of Angels, Cheeseburgers & Cheesecake
Baked Burik Recipe
Blocked Goals and Anger
Why the Mezuzah is Placed on a Slant
Comments
MOST POPULAR IN Shavuot
Our privacy policy