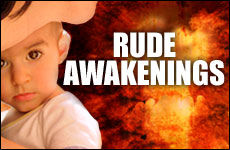 Yesterday I had to take my year-old daughter, Moriah, for some routine tests at the hospital. Moriah is a bundle of positive energy, the kind of smiley, babbling baby who evokes waves and smiles from even the sternest looking passerby and cookies from the grouchiest storekeeper. For her whole life, grownups have been a source of only goodness, providing Cheerios and dry diapers and bottles of milk warmed up in the microwave to exactly the temperature she likes.

This is why it was especially heartbreaking to spend yesterday morning with Moriah at the hospital, and witness my daughter's rude awakening to the fact that grownups have another side to them as well.

Yesterday, Moriah met the kind of grownup who smiles and says goo-goo and then sticks her arm with a needle in order to draw out blood while she screams in shock and agony. She met the kind of grownup who smiles, hands her a toy, and then pins her onto her back in order to insert tubes into all sorts of painful places, while she yells inconsolably for twenty minutes.

In the taxi home from the hospital, I felt relief that this test had been performed, and thankful to the physicians who provide such excellent healthcare for my family.

At the same time, I wondered if Moriah would ever be able to lie on a doctor's examination table again without being crazy with fear. I wondered if she would always be a little bit different because of what she had experienced that morning, a bit more cautious and a bit less trusting.

Over Moriah's occasional aftershock sobs, I listened to the newscaster on the radio speak about the five soldiers who would be buried that day, as well as the three civilians who had been killed that morning by a rocket in Haifa. Once every two or three minutes the songs on the radio were interrupted, "Residents of Kiryat Shmona, enter your bomb shelters," and then a minute later, "Residents of Safed, enter your bomb shelters," each announcement warning of yet another deadly volley of rockets sent to Israel's north.

As I closed my eyes, and put my head back on the seat's headrest, I thought back to my own rude awakening several years back about the nature of war and peace in Israel.

Growing up in Baltimore, like many Jewish children from liberal-minded families, my siblings and I attended a Quaker school called Friends, a school where we learned, in accordance with Quaker beliefs, that armies and wars were universally bad, and that peace would only come if we were conciliatory and loving towards our enemies.

I majored in Russian and Politics, and dreamed of working for the United Nations in order to promote peaceful coexistence between all peoples.

As a child of the Cold War, from a young age the threat of war hung over me like a dark gray storm cloud. While my classmates were worrying about pimples and the auditions for the school musical, I was losing sleep over the Soviet nuclear threat.

I wanted peace, and I wanted it now. I attended demonstrations demanding a nuclear freeze, became fluent in Russian, and traveled several times to the Soviet Union on student exchanges aimed at increasing mutual understanding and peaceful coexistence between the two Superpowers. In college, I majored in Russian and Politics, and dreamed of working for the United Nations in order to promote peaceful coexistence between all peoples.

Throughout high school I was also an active volunteer for the American Friends Service Committee, a Quaker political action group that promoted pacifism. When my Zionist grandmother angrily pointed out that the AFSC had been printing maps of the Middle East with the State of Israel removed, I understood that they valued peace in the region over the interests of Israel, and I assumed that whatever they believed must be ethical and just.

During my junior year of college, I visited Israel for the first time and started becoming observant. Immediately after my college graduation in 1993 I moved to Jerusalem.

Why would any people choose to make war if we would fulfill their demands and reach out to embrace them?

By that time, the Soviet Union no longer existed, so I transferred all of my worries and hopes for peace onto the Arabs that threatened us from within Israel and from without. I still believed, in accordance with my Quaker education, that if we would act peacefully, and pull out of all the territory the Arabs considered occupied, then we could establish a strong and lasting peace. Why would any people choose to make war if we would fulfill their demands and reach out to embrace them?

On a personal level, I befriended and prepared class projects with my Arab classmates at Hebrew University, I studied Arabic, I attended discussion groups in the West Bank between Palestinians and Jews. I patted myself on the back for doing my part for peace.

Throughout the 1990s, I silently cheered as the peace process rolled on and on, the Israeli army pulling out of Jericho, Nablus, Jenin, as well as other cities. Peace was in the air, a New Middle East was on the horizon.

On one of her visits, my mother suggested that sometime soon, when the peace process was finished, she would love to take a train from Jerusalem to Amman, or better yet to Damascus.

The strange thing was that I started noticing that after every withdrawal, and after every advance in the peace process that received a standing ovation from the UN, Israel was soon reeling from an even more devastating terror attack coupled with demands for half of Jerusalem to serve as the Palestinian's capital city.

It was during that time, in 1996, that my two friends, Sara Duker and Matt Eisenfeld, two bright, kind, idealistic American students in their early twenties who were active supporters of the peace process were murdered by a suicide bus bomber. Matt and Sara were engaged to be married, but instead of sharing their lives together, they have only shared their deaths, in graves that lie side by side.

In the fall of 2000, less than four months after the UN rose to its feet to applaud Israel's withdrawal from its Security Zone in Lebanon, Arafat, the terrorist turned president with whom Israel had been signing the peace agreements, secretly began orchestrating the terrible Intifada that ultimately claimed over a thousand Jewish lives.

During those scary and bloody years, there were many weeks when, from our home in downtown Jerusalem, I heard two or more explosions. If my husband or I went shopping in the market or downtown, we shopped quickly with racing hearts, and then rushed home, grateful to have arrived home unharmed.

During the Intifada, I learned that on the frequent occasions that the Arabs agreed to a ceasefire, I should brace myself for an even more brutal terror attack claiming even more Jewish lives.

Because of what I have learned over the past decade, when Sharon uprooted the Jewish communities of Gush Katif a year ago in order to promote the peace process, it didn't surprise me to see how the Arabs took advantage of this withdrawal to send hundreds of deadly rockets into Sderot, the Negev, and Ashkelon.

I've learned that it is impossible to make peace with an enemy that is determined to continue making war.

And today, of course, it no longer surprises me to realize that Israel's gesture of peace, the pull-out from Southern Lebanon six years ago, was seen by Hezbollah as the perfect opportunity to amass 12,000 missiles on Israel's northern border, with the intention of attacking half of Israel's population that was suddenly within firing range.

After 13 years in Israel, I yearn for peace no less than I did when I traveled to the Soviet Union as a teenager. It's just that I have learned that it really doesn't matter if I want peace and I want it now, since it is impossible to make peace with an enemy that is determined to continue making war.

It's true. It's scary to face such a determined and powerful enemy, but our nation's history helps me to have faith and hope in the face of this terrible enemy that cuts off every hand extended for a handshake.

Since the beginning of our long history, in every generation a new nation has risen up to destroy the Jewish people, the Egyptians, the Romans, the Spanish Inquisitors, the Soviets, the Nazis, and today the Arabs. And always we survive somehow, and, with God's help, we even continue to thrive somehow, while our once mighty enemies crumble and disappear from the headlines.

It also helps me to remember that the Evil Empire wasn't brought down by my nuclear freeze demonstrations or my student exchanges. It was brought down by leaders who recognized that when you are facing evil, you don't budge one inch from your position until good has triumphed.

In the same way, when Israel stands strong, and fights to protect its citizens as we are today in Lebanon, it does not mean we are warmongers. It simply means that we are a nation that is too smart and has been through too much to commit suicide simply in order to get on CNN's good side for a few days.

As I held Moriah close yesterday in the taxi, I thought about the discomfort caused by rude awakenings. My rude awakening that peace between Israel and the Arabs is probably a long way off, and that the Talmud was right when it stated that this most holy of lands can be acquired only through suffering.

And I thought as well about the importance and necessity of rude awakenings. The necessity of recognizing the true intentions behind a smiling face in order to determine whether the person behind the smile has come to heal us or destroy us.

Every Soldier a Hero
In the Shadow of David and Goliath
Where Do the Laws of Nature Come From?
Saadiah Gaon, Rashi and Maimonides: How Three Rabbis Revolutionized Judaism
Comments