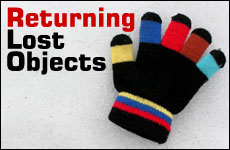 "Finders keepers, losers weepers" is not a Jewish concept.

"If you see another person's animal, you shall not hide from it; you must return it to the owner. If the owner is not known to you, then you should bring the object into your house, where it shall remain until the owner inquires after it, and you will return it to him. So shall you do for his donkey, his garment, or any lost article that you may find…" (Deut. 22:1-3)

"Returning lost objects" is one of the 613 mitzvot in the Torah. At the most basic level, this means that if we find a bundle of money lying in the street, we are required to seek out the owner and return it.

The Torah adds a deeper dimension: "You shall not hide yourself from it." This precludes the option of ignoring it and going along your merry way.

With lost objects, the key factor is "siman" – an identifying mark by which the true owner of the item can be determined.

What is an acceptable siman? Anything that is: 1) not standard for this type of item, and 2) only the owner is likely to know about. For example, if you find an umbrella with initials scratched on the handle, or an iPod with a blue ink stain, that is a siman. And that means you are obligated to try to find the owner and return it.

Sometimes, the precise location where the object was found can be considered a siman, if this is an atypical place for it to be. If the item appears to have been placed down intentionally, it should not be removed, as the owner is likely to return to look for it.

If an item is found in a public place without any siman, the finder may keep it.

Once you find an object, you’ll need to post signs in the area (or on Craigslist), and ask around for who may have lost such a thing. As an example, you would publicize: "Briefcase found on July 1st on Brookville Drive. To claim it, call 555-1234."

The key is to divulge enough information about the object so the owner will know it refers to him, but not too much information that someone could unscrupulously come and claim the object. Whoever calls to claim the briefcase would be required to give a “siman” – e.g. basic identifying marks like color, size, and perhaps some of the contents. In this way, we are certain that the object is properly returned.

In the interim, the item may not be used; it must be cared for and kept in a safe place. However, if it gets lost or stolen, the finder is exempt.

What happens if no one comes to claim the item? The Sages say that you must hold onto it “until Elijah the prophet comes” and identifies the rightful owner.

It is permitted to sell the object and put the money aside.

Of course, this can get very burdensome. So once it becomes evident that an item is not being claimed, it is permitted to sell it and put the money aside to be returned to the owner. In that case, the details of the item should be recorded, including the specifics of where and when it was found, and the amount of money for which it was sold.

The Talmud (Taanit 25a) tells the story of how chickens once strayed into the yard of Rabbi Chanina Ben Dosa. Rabbi Chanina thus became obligated to care for the chickens until their owner could be found. The chickens laid eggs which hatched into chicks -- and soon Rabbi Chanina's property was overrun with a whole flock of chickens! In order to consolidate, he traded all the chickens for a few goats.

Through careful observance of the mitzvah, Rabbi Chanina had multiplied the wealth of the original owner of the chickens. By the time the man came to stake his claim, he was the proud owner of an entire herd of goats.

Listen to an inspiring story: "Returning the Day Planner" by Rabbi Shraga Simmons.

Another application of this mitzvah is taking responsibility for any damage caused to someone else's property. The classic example is if I accidentally dent another car in the parking lot; I am required to leave a note with my phone number.

The Talmud (Baba Metzia 31a) extends this idea to include "preventing damage." For instance, if your neighbor's house is about to be flooded -- and he's not home -- then you are required to set up sandbags. (You could later ask to be reimbursed.)

The mitzvah to return lost items applies not only to material objects, but also to more intangibles. For instance, if someone is not talking to a friend because of an argument, we should try to help restore the relationship.

Furthermore, if someone is drowning or in other physical danger, rescuing them is also included -- you are restoring to them life!

And here’s one more aspect of this mitzvah: If someone has lost their connection to Judaism, we must do what we can to help restore that connection. With this idea in mind, consider the following illustration:

Sam the stockbroker calls up his friend Bill. "I've got a hot tip on a new stock," says Sam. "It's guaranteed to double overnight!"

"Oh, I've heard about these so-called 'hot tips' before," says Bill. "Thanks anyway, but I'll pass."

One week later Bill gets a phone call. "Hey, it's me, Sam. Remember that great new stock I told you about? Well I put down $10,000 and it doubled overnight! I think it's going to keep on climbing, so I'm reinvesting my entire $20,000. It's not too late for you to get in on the action. Are you interested?"

One week later Bill gets a phone call. It's Sam the stockbroker. "Wow, this stock is amazing. It keeps doubling and now my investment is worth over $100,000. C'mon, Bill, why don't you invest in this stock. It's great!"

The stock portfolio is now worth over a million dollars.

Week after week, month after month, the phone calls continue. Sam's stock keeps rising. And Bill is left out in the cold.

One day Bill's phone rings. (He's hoping it's not Sam with more investment news.) "Hey, it's me, Sam. I want to tell you something. Do you remember months ago when I invested that first $10,000? Well, at the same time I took another $10,000 and invested it in your name. Now that portfolio is worth over a million dollars. We're good friends and I care about you a lot, Bill. So just give me the original $10,000 and the million dollars is yours!"

Can you imagine such a deal?

Now apply this to Jewish history. From Moses to Maimonides, from the Holy Temple to the modern State of Israel and everything in between, our ancestors sweated and fought and sacrificed to build a Jewish legacy. A heritage of wisdom, of idealism, of education, and of caring for each other and for the world.

This is not a Jewish guilt trip. This is about recognizing our birthright. For 4,000 years, the Jewish people have been accumulating an enormous treasure and have been guarding it, just waiting for each of us to come and collect!

Work and Human Dignity
What Makes Eli Run?
The Tyranny of Materialism
Science Enters the Mysterious Inner World of Consciousness
Comments
MOST POPULAR IN Interpersonal
Our privacy policy