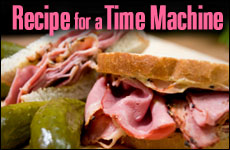 Eating the food of my youth turns me into a kid again.

Once upon a time in a kitchen far, far away, I spent a cuddly kindelahhood being babysat by my grandma in our fairy tale of a family deli downtown New Haven, Ct. I could have done worse. She, a sorceress of superb taste, made ruggelach fresh daily, with me assisting, eating fistfuls of walnuts that 'just happened' to fall from the dough, licking the battered bowl of elixir from the cake preparations, eating crumbs that magically broke off the babka. My mouth was as busy as my hands as I ingested the mysteries of grandma’s cuisine.

I spent my kindelahhood being babysat in our fairy tale of a family deli.

We were major meat eaters in those innocent days, breakfast, lunch, noshes, suppers and snacks. How could we not be, with kosher creatures sticking out their tongues or lolling seductively about in grandpa's display cases? Lunches luxuriated in exotic fare like liverwurst, baloney, pastrami, corned beef and melt-in-your-mouth scoops of the Chartoff chopped liver. Thin slices of the salamis were served in sandwiches, on toothpicks, fried up with eggs and Grandma's brisket was to die for, and she and grandpa left the earth from heart disease far too soon to prove it.

Hence, the alchemy of vegetarianism became my path when I moved into independence in Manhattan, making food choices from educated fears rather than the addictive flavors of family bonding. But, oy, I was so allergic to soy, was on the outs with sprouts. And I fantasized about the fine, fatty foods of my childhood more than blah, bland, lean steamed greens of my enlightened youth. The healthy veggie life seemed way too staid to my cursed, smell-shocked tastebuds.

Fortunately, I found Ratner's 2nd Avenue Restaurant while rehearsing for my first Broadway show, "Via Galactica" with Raoul Julia at the Ukrainian Home across the street. He knew how homesick I was for the hamisha foods of my youth amidst the scary big world of commercial NY Theater. We took our lunch hours far away thematically from our high tech, space age, rock opera rehearsals, in an ancient world of afficionados ingesting gorgeous beet borschts, filling cheese blintzes, crunchy garlic bagels and nurturing barley soup at the restaurant. Hearing Puerto Rican Raoul order ‘kugel’ and “kasha” cracked me up.

And we weren’t the only performers eating there. Such noshing notables as Abbe Lane, Jackie Mason, Elia Kazan, Edie Gorme, Zero Mostel, Henny Youngman, and a few Rockefellers were often breaking onion bread nearby.  The Fillmore East had just closed next door, but the roadies and the legends of Janis Joplin and Jim Morrison slurping Ratner’s matzoh ball soup lived on. Far from elegant, with no VIP tables, and equal opportunity offensive waitresses, the Ratner’s atmosphere and staff made all feel at home -- teased and overfed.  It was astonishing to me that Jewish food had become the traditional show biz food.  And away from home, out of college cafeterias, with a small kitchen of my own in Greenwich Village, I longed to make my home smell like Grandma’s, yet keep my heart safe like Ratner’s.

A few years later, I learned of Ratner's Meatless Cookbook. The magical meals of my past became demystified at last. Exotic tastes became traceable ingredients. Because I was reared on yellowed, handwritten, hand me down recipes, stained with Crisco, crumbed with cinnamon, and because my father always shooed us all out of the kitchen as he recreated the deli dishes, I had never even read a cookbook til Elizabeth Lefft and Judy Gethers' great assemblage of the greatest hits of the original Ratner's Dairy Restaurant on Delancey St. gave me reason to feast. Here were the foods of my family, reframed sans cruelty to animals or heart valves, yet captivating in texture and taste.

To this day, I can trip back to the past concocting one of their great dishes and recall some of my dearest days dining in my bubbe’s deli kitchen, and in the nostalgic days of Ratner’s itself.

Drain the precooked lentils. Pour ½  Cup Onion into a bowl. Chop finely the lentils and eggs. Add to the onions. Saute remaining onions in half the oil until brown. Mix lentil mixture with sautéed onions, the remaining oil, peanut butter, pepper and salt. Serve on lettuce leaves with white or red horseradish and a slice of tomato.

Bread: Back to Basics

All Chocolate, All the Time
It Takes A Lot Of Faith To Be An Atheist
How Instagram Brought Back This Nostalgic Soup
What Makes Eli Run?
Comments
MOST POPULAR IN Family
Our privacy policy