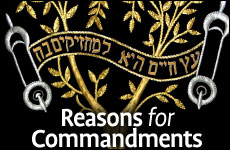 Exploring the meaning of the Jewish laws elevates their performance to an act that makes a spiritually significant impact on our lives.

"It is appropriate that one meditate, according to his intellectual capacity, regarding the laws of the Torah to understand their deeper meaning. Those laws for which he finds no reason and knows no purpose should nevertheless not be treated lightly." (Maimonides – Me'ilah 8:8)

Throughout the ages, Jews followed the dictates of Torah as a matter of basic faith. Our adherence to the Torah and its laws cannot be dependent upon our finding them satisfactory. This is the principle of na’aseh v'nishma ("we accept to do and we will hear"), the declaration of commitment which preceded the receiving of the Torah itself. Acceptance of this principle, unconditional commitment to the will of God, is the prerequisite to acceptance of the Torah...

Nevertheless, Maimonides' ruling clearly states that not only is one permitted to meditate upon the meaning of the Jewish laws, it is appropriate to do so.

Herein lies a dilemma. Granted that we should ponder the laws, but can the finite mind of man actually grasp the infinite wisdom hidden within each Jewish law? Can our limited faculties comprehend and encapsulate the true meaning of the Divine law? Perhaps we need to re-examine the purpose of attempting to understand mitzvot.

Mitzvot need no explanation. Our Sages teach: "One who [in referring to the mitzvah of chasing away of the mother bird before taking her eggs or chicks] says: 'even young birds merit your kindness,' is silenced." (Mishnah – Brachot 5:3)

Understanding the mitzvah’s rationale elevates it from a mere physical act.

The purpose of understanding a mitzvah is not to comprehend what is accomplished with the mitzvah, but rather to perceive the lessons to be drawn from the mitzvah. God does not need us to care for His creatures; He has countless means at His disposal. The purpose of the mitzvah of chasing away the mother bird before taking her eggs or chicks is that we internalize feelings of compassion (see Maimonides on Deuteronomy 22:6). Thus, when we investigate the reason behind any of the Jewish laws, it is not to explain the mitzvah, but to discover what we may draw from it. The understanding of the rationale of the mitzvah elevates its performance from a mere physical act, to an act that makes a spiritually significant impact on our lives.

Since any theory or explanation advanced as a rationale for a mitzvah is merely conjecture, one can never draw Jewish legal conclusions from any interpretation of a mitzvah, even one presented by earlier authorities. As valid as any interpretation may be, it certainly does not reflect the complete spectrum of the meaning of the Jewish law. Just as the Torah itself is infinite, so too is each of its laws. Yet, simultaneously, since we are enjoined to ponder the meaning of mitzvot, any hypothesis about their rationale, congruent with the known principles of Torah guidelines, is valid and enhances the effect of the mitzvah upon man.

Furthermore, one should never be tempted to detach the moral lesson of the Jewish law from its performance. One may feel that once he has penetrated the meaning of the mitzvah and drawn from it inspiration and wisdom, he may neglect the actual performance of the mitzvah ritual. This is incorrect. As Maimonides teaches: If one experiences a spiritual awakening he must concretize it if it is to have any permanence. It is insufficient to be a good Jew in heart or mind. Torah is a Torah of life, and all its exalted ideas must find active expression and actualization in daily life. The obligation to keep the Jewish laws is therefore independent of any understanding of them.

One who performs a mitzvah without any thought of its meaning has nevertheless fulfilled his obligation, albeit in a diminished form, while one who contemplates and internalizes, but ignores the mitzvah act, has in no way discharged his responsibility and remains liable for omission and its accompanying penalty. The principle of na'aseh v'nishma, fulfilling and understanding the Jewish laws, does not only mean that we accept the Torah without preconditions, but also that the hearing and understanding of the mitzvah follows and is secondary to its actual fulfillment. Internalizing the mitzvah is only meaningful when coupled with the performance of the mitzvah.

This is in tandem with the axiom (Avot 3:12), "Anyone whose wisdom exceeds his good deeds – his wisdom will not endure." Just as the fire of the candle cannot exist without a wick on which to kindle, so the most profound and exalted concepts contained in the Divine wisdom of Jewish laws must find physical expression in order to be sustained.

Jewish laws generally may be classified into two separate categories: laws whose underlying rationale remains an unknown entity to the human being, and those to whose reason man has been made privy, allowing him an awareness of the positive impact they have on society at large and on the individual's personal quality of life.

Doing a mitzvah even without knowing its meaning provides spiritual sustenance.

In Scriptures, the basic portion of food necessary for minimal human survival is called lechem chuki (Proverbs 30:8), from the word chok (statute). Just as one's nutritional needs may be met even via intravenous feeding, so too the minimal purpose and goal of mitzvot is more than sufficiently provided by the mere physical act of mitzvah fulfillment, which is in itself a show of subservience to the Almighty. Doing a mitzvah even without knowing its meaning provides us with our basic spiritual sustenance requirements.

Yet, just as one has little appetite for nourishment imbibed in such a fashion and does not relish such tasteless food, so too the sense of excitement, intellectual identification and emotional attachment that should be part and parcel of doing a mitzvah is extremely difficult to achieve without knowing its reason.

It is for this reason that the Hebrew word taam has a dual meaning: taste and reason. The reason makes the mitzvah appetizing and "tasty" to the heart and mind so that not only the body but the totality of the Jew – body, mind, soul and emotions – serve God, in fulfillment of the words of King David, "All my limbs will say 'God who is like You?' " (Psalms 35:10).

Reprinted from "THE LAWS OF KASHRUS" – ArtScroll.com

When the Holidays Are Over

The Rules of Halacha
Extras In Our Own Epic
Evolution 2.0: The Coming Darwinian Revolution
Chukat 5782: Let’s Play the Blame Game!
Comments
MOST POPULAR IN Mitzvot
Our privacy policy