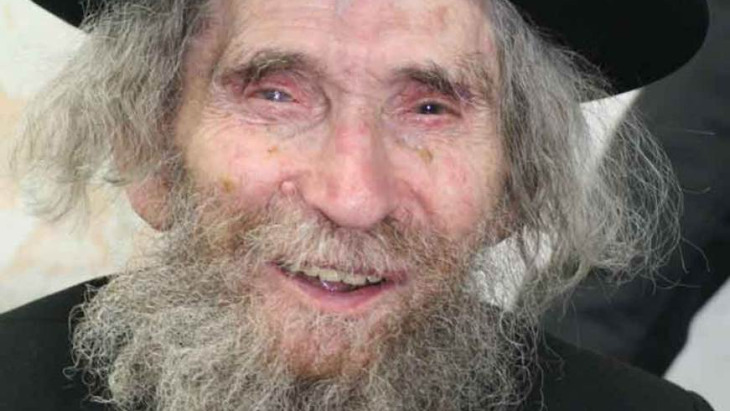 Serving God and the Jewish people for 104 full years.

December 12, 2017 – Rabbi Aharon Yehuda Leib Shteinman, the leader of Torah Jewry, passed away today at the age of 104. An estimated 600,000 people attended the funeral, held on short notice.

Visiting the small apartment on Chazon Ish Street in Bnei Brak, Israel, one could be excused from failing to identify this as the home of a global leader. Stucco-cement, simple plastered walls, unfinished wood cabinets – and rows of floor-to-ceiling bookshelves filled with Torah commentaries. 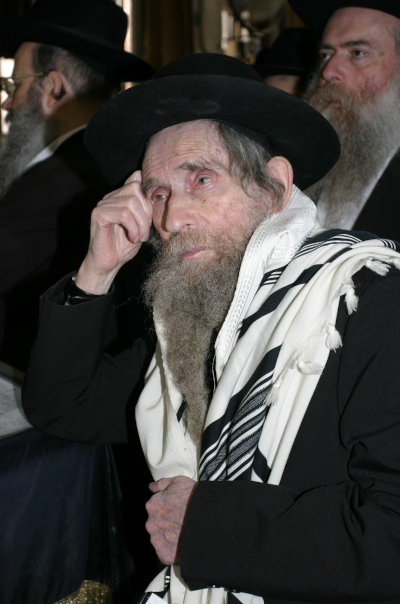 Yet here, in an office that doubled as his bedroom, Rabbi Shteinman received visitors from every stream of Jewish life – educators seeking guidance on curriculum; politicians formulating key legislation; schoolchildren tested on their studies.

The door to his home was always open. No problem was too trivial for him, and people came from around the world to line up outside his door – sometimes waiting hours – to speak with him. Legend has former Israeli Prime Minister Ehud Barak jumping through the window to bypass the crowds.

Rabbi Shteinman authored 15 volumes of commentaries on the Talmud, plus a series on the Five Books of Moses, all under the title Ayelet Hashachar. He was a highly-sought expert on education, and author of Leading with Love: Guidance for Our Generation.

Rabbi Shteinman was born in 1913 near the Polish-Lithuanian border. Just prior to World War Two and faced with forced induction into the Polish Army, he fled to Switzerland. He eventually landed in a refugee labor camp, and was the only member of his family to survive the war; both his parents, and all five brothers, were killed during the Holocaust.

He arrived in Israel in the early 1950s, and for six decades slept on the original plank-board and thin mattress issued by the Jewish Agency. For the next six decades, he led various Torah institutions, including Gaon Yaakov, the yeshiva he founded in Bnei Brak. 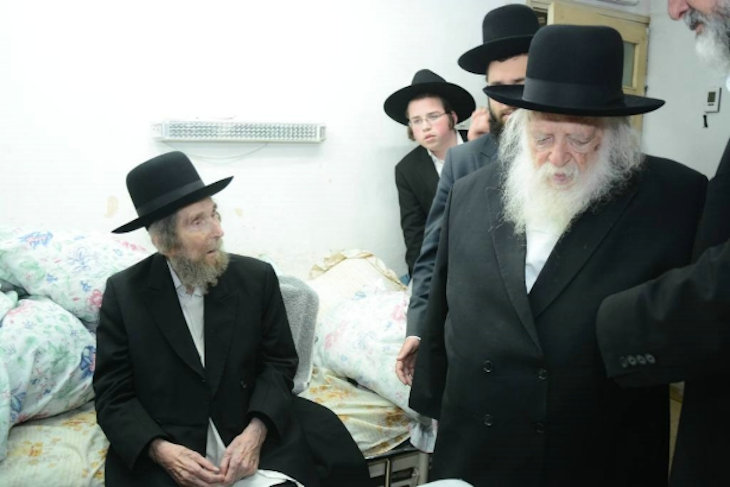 Following the death of Rabbi Yosef Shalom Elyashiv in 2012, Rabbi Shteinman assumed the title of Gadol Hador, widely acknowledged as the final word in Torah Jewry. In this role he influenced hundreds of thousands of Jews through teaching, direct counsel, and public policy.

Rabbi Shteinman had a vastly broad perspective that comes from living across multiple generations and traveling the world. But his most important asset was having plumbed the depths of millennia of Jewish wisdom – which he then extracted expert on everything from education to parenting, diplomacy to spirituality.

A few years ago, when I was publicizing the dangers of nuclear Iran, I consulted with Rabbi Shteinman. While supporting my efforts, he cautioned on one point: "Avoid direct personal attacks on Iranian leaders," he said. "There is some evidence in our history – whether the biblical Esav, or the early days of Hitler – that one must be careful not to agitate a personal confrontation."

I left the meeting in stunned silence. Here was a frail old man, sitting on a hard bench, and illuminating a sensitive diplomatic issue – referencing not only the Torah-based paradigm for dealing with foreign enemies, but also evidence in his lifetime that certain anti-Nazi protests may have been used to "justify" actions against the Jews.

When my youngest son was born, Rabbi Shteinman graciously agreed to be Sandek, holding the baby for the circumcision covenant. 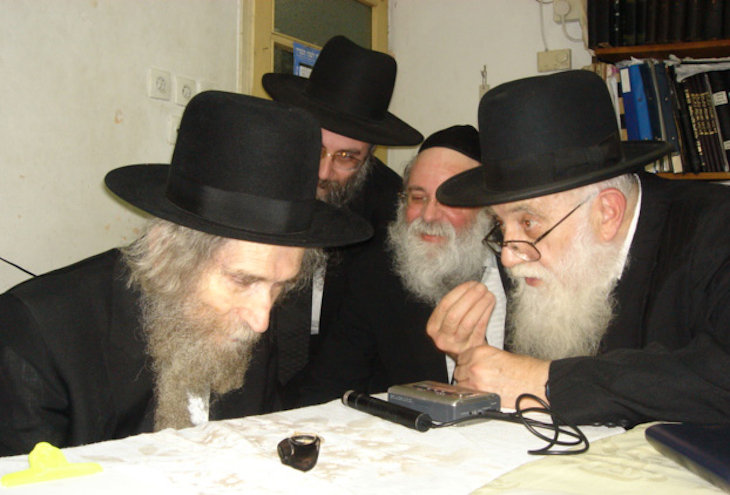 In contrast to the Western style of choosing leaders – often a self-aggrandizing popularity contest between egocentrics – Rabbi Shteinman was chosen with no elections, campaigning, or brash publicity antics. He became leader based on his deep humility, compassion, respect for God, and commitment to serve – with no thought to personal compensation or glorification. He served with no salary, no palatial office, no private jet, and no term of office – maintaining his position solely on the people's trust.

When it came to Torah study, Rabbi Shteinman was a purist. He defined "yeshiva" as not simply a place for high-level Torah study, but as a safe haven free of forces antithetical to Torah. Particularly in the digital age, where negative influence is impervious to physical barriers, he believed that the best protection is unswerving commitment to Torah values.

Rabbi Shteinman was known as a moderate. He provided an opening for some to serve in Nachal Charedi units of the Israeli army. For this, Rabbi Shteinman took some heat, and for years courageously stood up to criticism. Rabbi Shteinman instituted a policy of "no child left behind," starting schools for less-talented children, children of immigrants, and others at risk. And he increased Torah influence in Israel by approving the inclusion of a charedi minister in Israel's cabinet. 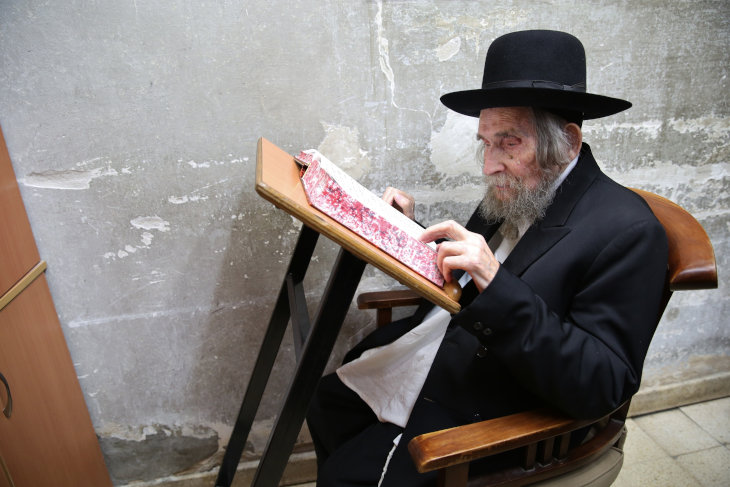 Rabbi Shteinman was a role model for anyone trying to steer clear of the many trappings and pitfalls of a modern lifestyle. When Israeli Ambassador to Japan, Nissim Ben Shitrit, visited Rabbi Shteinman's small and humble apartment, he astonishingly remarked: "I've never seen anything like it."

On weekdays, his entire daily food intake was one cucumber, one boiled potato, and few spoons of oatmeal. Rabbi Shteinman had trained his body to desire food only for pure motives – to keep his body healthy – without a drop of hedonism. On Shabbat, he ate different foods in honor of the holy day. When he was offered delicacies as a guest, he obliged by eating half a grape.

Rabbi Shteinman typically sat on a wooden bench with no back. He used various techniques to stay awake for long hours and study. Over the years, many people offered to upgrade his accommodations, but Rabbi Shteinman always refused, insisting that he has precisely what he needs and no more.

In 2005, Rabbi Shteinman announced he was travelling the world to strengthen those Jewish communities geographically removed from the great Torah centers. He did so out of a great sense of responsibility, in keeping with the important Jewish tradition of leaders "travelling from place to place" (Midrash – Eliyahu Rabba 11). Though his students and doctor tried to dissuade this arduous trek, Rabbi Shteinman replied: "It is not up to the doctor. It’s up to God, and if He wants it, nothing is too difficult.”

Rabbi Shteinman's iron will prevailed over his frail body, and these trips continued – to Mexico City, Los Angeles, Montreal, Buenos Aires, Berlin – until his 100th birthday.

On these travels, the frail Rabbi Shteinman would sometimes visit 4 cities and deliver 10 speeches – in one day! Once, after collapsing from exhaustion, and in the face of doctors' orders to cancel the rest of his trip, Rabbi Shteinman declared: "As long as God allows me, I will continue what I came to do."

In Lakewood, New Jersey, 15,000 people came to greet Rabbi Shteinman. When he visited Gibraltar – a Jewish community that numbers just 600 – 700 people showed up to see the rabbi. The community declared a holiday and all Jewish businesses closed down. If a Torah scroll is welcomed with great fanfare, they reasoned, all the more should we honor a living Torah.

During his trip to Ukraine, the streets surrounding the synagogue were filled with hundreds of people at 4:30 a.m, hurrying to join Rabbi Shteinman's sunrise service. The rabbi's ability to generate such enthusiasm in a community that not long ago had trouble putting together a minyan.

On a visit to the United States, Rabbi Shteinman was asked why America, alone among the great historical powers, had been largely spared foreign invasion. He ascribed it to an ethos of kindness and compassion (Malchut Shel Chesed) which, he added, is America's best shield moving forward.

With his inspiring global travels, Rabbi Shteinman fulfilled the words of Rabbeinu Yona (Sha'arey Teshuva 3:147) describing the effect of greeting Torah leaders: "Sleeping hearts will reawaken when they see the splendor of honoring Torah and recognize its grandeur. This will cause a great thirst for Torah, and desire to serve God wholeheartedly."

Indeed, the people of one community formed a group to undertake communal projects which had been previously rejected as too difficult or time-consuming, "If Rabbi Shteinman can do it, so can we," they said

Living on a Miracle

This is how Rabbi Shteinman lived: with clarity that the future of the Jewish people is predicated on Torah, and with complete trust in God. During a wave of rocket attacks from Gaza in 2012, he said: "There are dangerous threats every moment, and if God would not protect us, there would be complete chaos... God wants our prayers, so He tries to shake us up however He can, so that people will start to pray."

Israeli President Reuven Rivlin said that Rabbi Shteinman "bore the entire weight of the Jewish people’s existence on his shoulders... Despite his firm positions, he knew how to convey his ideas gently, in a pleasant manner, and with a great love of the Jewish people... He was a man whose wisdom was exceeded only by his humility."

Rabbi Shteinman inspired an entire nation that we are truly a "nation of priests and a holy nation. It is now our obligation, to honor Rabbi Shteinman's memory, by living up to those responsibilities.

Giving Voice to the Stifled Jews of Iran