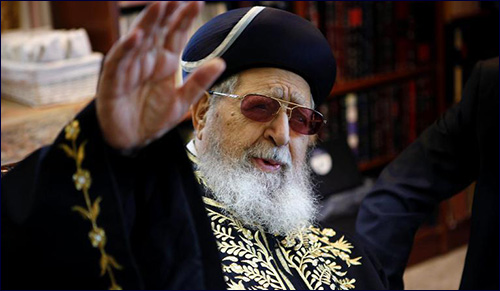 The Jewish world mourns the loss of one of the greatest Torah leaders of the generation.

Born in 1920 in Baghdad, Iraq to Rabbi Yaakov and G'orgia Ovadia, Hacham Ovadia Yosef emigrated with his family to Jerusalem at age four. As a teenager he attended Porat Yosef Yeshiva. He was ordained by his 21st birthday and married Margalit Fattal when he was 24. (She passed in 1994 after raising 11 children together.)

In 1947 Hacham Ovadia was asked to come to Cairo, Egypt to serve as a teacher and on the Beit Din (religious court). In 1949, he moved back to what had by then become the current State of Israel and continued his studies while serving in the Beit Din of Petah Tikva. He also published the first of his set of books Chazon Ovadia and Yabia Omer during this time. 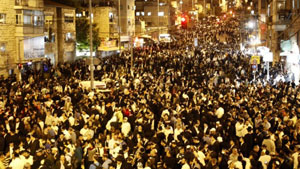 In 1984, Hacham Ovadia started the Shas political party, currently the fourth largest party in the Knesset.

In the Porat Yosef Yeshiva, a young student suddenly went missing. The staff was clueless as to this student’s whereabouts. After several days, the famed Rosh Yeshiva, Hacham Ezra Attiya (1885-1970) one of the greatest Torah scholars in the 20th century in the Sephardic world (his students included Hacham Ben Tzion Abba Shaul, Rav Kaduri, and more) became very concerned and decided to pay a visit to the student’s home.

When Hacham Attiya spoke to the father, the father explained that the family business was a small grocery store and he needed the help of his son as a delivery boy. The Hacham attempted to convince the father of the importance of Torah study, and tried to find a solution to the manpower issue, but it was to no avail. The father would not budge.

The next morning when the father went to the store, he was shocked to find Hacham Attiya, the Rosh Yeshiva himself, standing outside the store in work clothes. When questioned by the father he replied, “Your son’s learning is unquestionably more important than mine and you are murdering the Gadol (great rabbi) of the next generation. So I will be your delivery boy in his place. Just send your son back to yeshiva!"

The father understood the seriousness of the Rabbi and sent his son back to the study halls. This boy turned out to be Hacham Ovadia Yosef z"l.

Hacham Ovadia is perhaps most known for his scope of knowledge, as can be seen by his responsa in Jewish Law. In a typical responsa, he may quote over 50 sources on a given topic. I merited to frequent his home and pray with him. There were no walls or wallpaper, but only thousands of sefarim (Torah books) organized in a specific order. Every so often I would pick up one and look inside, only to find that on any given book you could not go three pages or so without his handwritten commentary on the topic.

Once a guest walked in and asked,“Rabbi I heard that you have a photographic memory. Is that true? Do you know all of these books by heart?”

Those around in the room challenged him to try to stump the Rabbi. “Pick anyone of the thousands of books, start a line, and Hacham Ovadia will finish it,” they said.

As the man reached towards the set of Shas (Talmud), everyone around started to smile. “You might want to try something not so easy,” they said.

His son, Hacham Daveed Yosef shlit”a, once told me in the name of his father, “He wishes that everyone would know that his mastery of Torah is not only due to being a prodigy but also to his tireless effort and toiling in Torah. One morning his kids noticed a very peculiar action: Hacham Ovadia woke up in a blaze, ran towards the sink to wash his hands, recited Birkat HaTorah (blessings recited before learning Torah) and rushed to look at a responsa of the Rivash. The children were very curious for an explanation. “We know that you have a love of Torah,” they said, “but what is the urgency?”

He replied that the night before he was toiling to understand two seemingly contradictory statements by the Rivash that seemed unresolvable. After thinking about the issue for a while, he resolved the contradiction. “In my sleep,” continued Hacham Ovadia, “the Rivash appeared to me in a dream and stated, ‘You have indeed understood my intentions, there is no contradiction in my two statements. It is all clarified in another source that I have written.’ Upon waking up I went to check the source he mentioned and indeed it was there.”

Hacham Ovadia Yosef had a thirst for Torah that is an example to all of us. Early one morning, his son woke up to finding his father lying on the floor studying. Alarmed, he asked his father, “Why is the Rav on the floor?”

Hacham Ovadia replied, “I woke up early to learn, climbed on a ladder to get a book and fell on the ground. I tried calling for help, but it was too painful and no one heeded my call, so instead of lying on the floor and simply writhing in pain and wasting time, I grabbed the sefer I could reach and decided to learn.” It was later discovered that he had broken a bone in his back that required surgery.

His Heart was with the People

Around ten years ago, Hacham Ovadia suffered his first heart attack and he was rushed to the hospital. The doctors decided that they needed to perform surgery immediately. Hacham Ovadia pleaded to postpone the surgery for three hours and be taken home. Rabbi Aryeh Deri was caught off-guard by the request and tried to convince the Rabbi not to wait. After the postponed surgery, Hacham Ovadia revealed his reasoning: While at home he had been in the middle of writing a responsa for an aguna (a woman where it is not clear if she is still considered married according to Jewish Law) and due to the heart attack, he could not finish it. “I might not come out alive from this surgery and then what will be of this poor woman? She will be stuck for the rest of her life, unable to remarry. I had to finish the responsa before the surgery.”

Yet the uniqueness of Hacham Ovadia goes beyond his brilliance and compassion. There was something else that he possessed that made him truly irreplaceable; he was the Commander-in-Chief of the Worldwide Torah Community. No matter what facet of Jewish Life was concerned, he was the one everyone went to.

Hacham Ovadia had the unique ability of not only being able to speak on the level of the wisest of the generation, but he could also reach out to the common folk. He made time for everyone, and everyone relied upon him for Torah wisdom. From Menachem Begin, who sought his counsel before returning the Sinai Desert to Egypt, to the Prime Ministers and Presidents of current day that sought his counsel before making major decisions, it was common sight to see the street being blocked off because a high ranking official has come to seek advice and blessing from the Rabbi.

As a resident of Har Nof, I merited to live on the same block as the Torah Sage, and was accustomed to this, as well as seeing many non-religious Israelis blocking the street because they had come to have Hacham Ovadia be the sandak of their son’s brit mila.

It is not a wonder that an estimated 850,000 to 1 million people attended his funeral, with another 200,000 stuck outside the city of Jerusalem that had been shutdown due to all traffic (the largest funeral in Israel’s history). From Jews with no background that attended his thousands of classes, to Judges of the Jewish Supreme Court that brought before him cases that they could not resolve, nearly 15% of the population of the State of Israel came to pay their respects.

The greatness of Hacham Ovadia was not only his Torah knowledge and pristine character, but also that he was able to show the world from whichever place they were standing that the Torah has the answers to everything. This fact was clearly reflected in his funeral – by the sheer numbers of attendees and the incredible diversity of those that were in attendance. Every type of Jew from every walk of life was standing in solidarity with one another, mourning over the loss of such a great man.

At a shiva of a great Torah Sage in Jerusalem I once heard Hacham Ovadia Yosef state the following: “We say ‘ HaMakom Yinchemchem btoch Shaar Avley Tsion v’ Yerushalayim’ ” – May the Place (the Almighty) comfort you among those who mourn for Zion and Jerusalem. HaMakom ” is most commonly understood to be referring to the Almighty who is ‘the Place’ of the universe. But Hacham Ovadia explained that it can also mean “the place” of the person in the Next World should comfort you, meaning his eternal place that he has attained through his Torah and mitzvot.

May the place that the Hacham Ovadia brought World Jewry to and specifically the Sephardic world of today, a level that could not even be fathomed years ago, be of some comfort to us in order to continue his legacy.

Although often traveling to reach out to Jewish communities worldwide, Rabbi Chaim Levy resides is in Har Nof, Jerusalem with his wife and children. He is a lecturer in many schools throughout Jerusalem, Rosh Yeshiva of Yeshivat Balei Daat (a yeshiva catering to English-speaking Sephardic young professionals located inside Hacham Ovadia's main Torah Institution in Har Nof), Director and Founder of GoSephardic Fellowships (reconnecting Jews worldwide to their heritage through events, classes, Shabbatons, and trips to Israel), and author of Anshei Hayil, a practical halachic guide in English for Sephardim. He is currently working on the second volume.

By What Right Israel?
The Promise Of The Land
Which Chat Are You On?: Parshas Behar/Lag Ba’Omer
Do You Like Slow-Cooked Food? Thank the Jews
Comments
MOST POPULAR IN Jewish Society
Our privacy policy