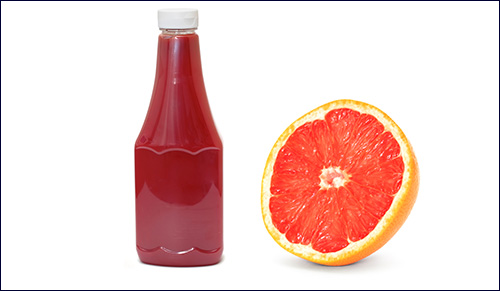 The perfect gifts are those that say, "I really thought about what to give you."

It all began quite innocently just over 22 years ago.

I'd been dating the Israeli woman who was to become my wife and she invited me to her parents for Shabbat.

As a gift, I brought my future in laws a pomelo.

As a gift, I brought them a pomelo.

And for some strange reason, it has been a running family joke ever since, although I fail to understand why.

I mean, what would you have brought to your future in-laws? Chocolates? Flowers? Wine?

Come on! Step out the box! Be original!

You can't do better than pomelos!

Just close your eyes and imagine the challenging pleasure of tearing away that tough yellow skin only to find more tough white pith underneath before you actually get to anything edible, which is now only about a quarter of the size of the gift you brought in the first place.

Truth is, I thought it was quite cute and sure to make a good impression.

They were even polite enough to accept it graciously, with no hint of the slightest snigger.

If they thought I was a scrooge, spending a dollar and 50 cents on a mutated grapefruit, they didn't show it. But how did they think I would treat their daughter?

Maybe they assumed it was an ancient British custom. After all, I am from England and it was Captain Shaddock, the British captain of an East India Company ship, who introduced it to his Jamaican hosts in 1696.

Or maybe they just thought I was weird. After all, when was the last time you gave your host a pomelo?

Whatever they thought, they didn't tell me.

So why all the fuss? Why has my citrophobic wife – bless her – been squeezing the juice out of me about this poor pomelo for the last 22 years?

Thankfully, I did find some vindication on the Internet:

"Pomelo is supposed to be the ancestor of citrus fruits. As it has purportedly medicinal values not in its flesh, but also in its leaves, it is usually given away as gifts on special occasions."

(Not that mine had any leaves on when I bought it, but still, it's the thought that counts, right?)

I also discovered that "Pomelos are especially popular gifts for the Chinese New Year. The Chinese believe it is a sign of prosperity and good fortune – good things will happen if you eat a pomelo."

Let's be honest though. The pomelo is not a particularly Jewish fruit, like grapes or etrogs (umm… that would have been a better gift, but in December?)

There is no mention of the pomelo being the Forbidden Fruit eaten by Adam and Eve.

Of course, Shaddock could have been a shadchan…

Come to think of it, my pomelo isn't the only longstanding gift joke in our family.

Have I told you about the most original and best appreciated wedding gift ever given in the history of marriage?

I kid you not. Kevin, a friend and my pre-wife flatmate, gave us (well one of us, I suppose) a crate of 24 bottles of the holy red in celebration of our nuptials.

Nevertheless, in contrast to the pomelo, there was a certain rhyme and reason to this one.

I loved ketchup. That's the reason.

Ketchup on fish, ketchup on meat.

Ketchup on sour, ketchup on sweet (that's the rhyme)

Thankfully though, after going through the 12 steps, I have now been dry for 17 and a half years.

But then, when we were still young and carefree, it was the most personal, thoughtful wedding gift we received.

And that's the kicker (as the ketchup inventors would say…)

The perfect gifts – for Shabbat, weddings or for no reason at all – are those that say, "I really thought about what to give you. I thought about who you are, your style, what you like, what makes you happy and how can I make it really personal and special for you, because you mean so much to me."

Yes, I have to admit, my pomelo was not quite in that category.

But at least I tried.

Nowadays we don't even try. We rarely have the time or make the quiet space to come up with anything original, creative or truly personal. We're invited to so many simchas that a check or a contribution to an unknown group gift is always far more convenient.

But please, and most definitely for our spouses and other most important people in our lives, let us not forget the Ketchup Factor.

Just to give you one gift idea – and to show you I'm not a complete klotz – here's what I did for my wife on our 20th anniversary – I took the shards from the glass I had broken under the chuppa, sent them to a glass jewelry designer, showed her the style and colors my wife liked and had her transform them into a necklace, bracelet and earrings.

Pomelos notwithstanding, that should keep me in the good books for the next 20 years…