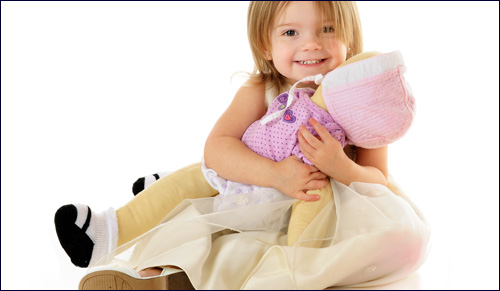 “I can’t believe someone just left their baby like that, lying on the chair, alone! Whose baby is that?!”

“Whose baby is that?” the secretary called out frantically.

I was standing in my pediatrician’s office with my daughter, and could hear the secretary in the waiting room clearly distressed about something.

“Big Baby” my daughter’s very life-like doll who had become an adopted member of the family.

“I can’t believe someone just left their baby like that! Whose baby is that??” She demanded angrily.

By that point we were done with the doctor, and came out to see what all of the ruckus was about. I saw the secretary motioning towards what looked like a six-month-old baby lying on one of the waiting room chairs, alone, and dangerously close to the edge.

“Oh!” I said amused, as I finally realized what the problem was. There on the chairs was none other than “Big Baby” my daughter’s very life-like doll who had become an adopted member of the family. But there was no time to laugh. There was a very angry secretary making a scene.

The secretary didn’t believe me, and only when she was in arms reach did she realize her mistake. “Oh my goodness! I can’t believe it. It looks so real!”

“I’m so sorry for scaring you. My daughter must have forgotten it here when we went in for our turn to the doctor.” I really felt bad. At least the secretary was in the right place for spiked blood pressure.

Big Baby had joined our family several years before, when I was due with my second child. My mother-in-law wanted to surprise my oldest daughter with a special doll on the occasion of a new sibling, and hoped it would keep her busy while I was in the hospital. On a visit to the states shortly before my labor, she bought the largest, most life-like looking doll in the store. Never mind that the doll was of unknown nationality, gender, and wasn’t all that cute. As soon as my daughter, Tehilla, saw “him”, it was love at first sight.

Big Baby went everywhere with Tehilla, and I mean everywhere. When she sat at the table to eat, Big Baby needed a chair as well. When Tehilla would take a drink, so would Big Baby. When Tehilla would play with someone else, Big Baby would sit and “play” as well. Tehilla even brought him into the bath one day, until we explained that the water might ruin his fabric stomach. From then on Big Baby would sit on the side and watch her bathe. The only place Big Baby wasn’t allowed to go was preschool (her teacher wouldn’t allow him admittance, much to our daughter’s chagrin). We had to promise Tehilla we would take good care of Big Baby while she was away. He remained in a sitting position on the couch all morning, awaiting Tehilla’s return.

The ridiculously expensive doll turned out to be a really good investment. Indeed, while I was busy with my newborn, Tehilla was busy with hers. Never mind that Big Baby was twice the size of her new baby sister, resembling a live six-month-old infant. Big Baby mimicked whatever developmental stage that Tehilla’s sister was up to. I almost felt like I had given birth to twins. When I would sit and nurse our newborn, Shifra, Tehilla would nurse Big Baby. When Shifra would get a diaper change, so would Big Baby. When Tehilla needed to burp, you can guess who burped even louder. The only thing Big Baby didn’t do was sleep as long as Shifra. Tehilla couldn’t bear to part with him for that long! Luckily Big Baby somehow managed on five minute cat-naps here and there.

We realized that Big Baby had started to take on a life of his own when neighbors began to treat him like another member of our family, inquiring after him. It wasn’t long before I received a bag of hand-me-down baby clothing. Not for my precious newborn. For Big Baby. I kid you not.

“I had such cute baby boy clothing that’s been through a few kids, but I felt bad throwing it out. Of course I thought of Big Baby. I hope Tehilla enjoys his new wardrobe!” A friend said as she dropped off a bag of baby clothes. Tehilla was in seventh heaven. Big Baby probably had more clothing than his “twin” sister did. At least his clothing stayed clean.

I was once perusing through old family pictures when Tehilla noticed and declared, “Mommy! Big Baby wants to see pictures of Big Baby when Big Baby was a little baby” (try saying that five times fast!). There was no use trying to explain that Big Baby didn’t actually grow, and looked the same in all pictures. We had to search through all of our albums to find pictures of when he was first “born.”

One day, I was walking up the block with my newborn in the baby carrier, with Tehilla trailing behind me with Big Baby in hand. As we neared the corner, I saw a horrified-looking woman walking towards me. It was only when she was a few feet away that she started to laugh and said “I said to myself, how could that mother walk so confidently ahead with her toddler holding a small baby like that? I can’t believe it’s a doll; it looks so real.” I could always leave it to Big Baby to be an ice-breaker, but I decided after that incident that perhaps Big Baby needed to remain at home. I didn’t want to be responsible for having to call Hatzlala.

One morning when Tehilla woke up, she was surprised to see that Big Baby wasn’t in her bed next to her and couldn’t find him anywhere. She immediately woke us up; this was a crisis! Big Baby was missing! Living in a small apartment, he surely couldn’t have gone far, but as hard as we tried, my husband and I couldn’t find Big Baby. Tehilla was in a panic; she refused to get ready for preschool, to eat breakfast, or to get dressed. We had to find Big Baby and now.

The search went on for over an hour. My husband whispered a few silent prayers Above, asking for help in finding our “third” child. I gave a few coins to tzeddakah. Tehilla continued crying. And then finally, my husband saw a foot sticking out from behind the couch. Apparently, Big Baby had spent an uncomfortable night wedged between the radiator and the couch. Tehilla was overjoyed, happier than I could ever remember seeing her. She played with Big Bay for hours, and refused to let go of him for days on end. (Seeing how busy that kept her, my husband and I contemplated “hiding” Big Baby just to keep her busy after they were reunited, but decided that it was too cruel).

As the years went by, Tehilla decided that she was too old to be playing with boys. The solution was simple: Big Baby was renamed “Rivky”. This was very convenient since by that point we had given birth to four girls in a row, so Big Baby/Rivky now had access to his sister’s hand-me-down dresses. Unfortunately in our old age it was too difficult for my husband and me to get used to the gender change, and “Rivky” is stilled called “he” in our home, which does account for some raised eyebrows when guests hear us calling it a him, despite him wearing a frilly pink dress.

Apparently my children aren’t very creative when it comes to naming dolls. Thus, if you come to my house today, you will meet not only Big Baby, but also Small Baby, Pink Baby, Crying Baby, Green Baby, and Pacifier Baby among others. But Big Baby will always have a special place in our hearts.

Recession Rocks Israel's Fig Market
Vayelech 5783: Regret and Repent
Rabbi Sacks: Focus On the Important, Not the Urgent
Put Your Foot Down: Are Human Feet Poorly Designed?
Comments
MOST POPULAR IN Jewlarious
Our privacy policy
Aish.com Is Looking for Great Writers