Politics or Spirituality: What Is an Antidote to Youth Suicide? 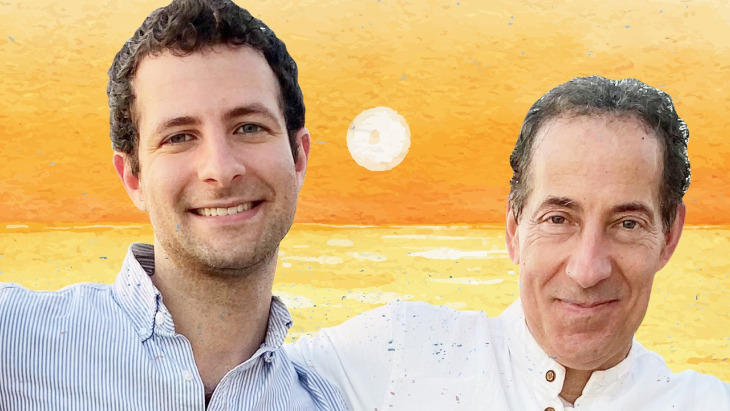 Jamie Raskin’s son had everything going for him. What was missing?

Jamie Raskin is one of the most prominent members of Congress. A representative from Maryland, he was the lead impeachment manager for the second impeachment of President Donald Trump, and is a member of the Select Committee to Investigate the January 6th Attack on the United States Capitol. Yet his political career has been overshadowed by the tragic suicide of his beloved son Tommy on the morning of New Year’s Eve last year.

I was moved by a recent interview with Raskin in The New Yorker.

His description of 25-year-old Tommy as possessing “a perfect heart, a perfect soul, a riotously outrageous and relentless sense of humor, and a dazzling radiant mind” made the snuffing out of Tommy’s light even more heartbreaking.

Perhaps I was more vulnerable to be caught in the orbit of Raskin’s grief because just a few days before I had visited the grave of my cousin’s son Ofer, who had also taken his own life, at the age of just 30. Ofer, like Tommy, was brilliant and personable. Ofer, like Tommy, was close to his parents and two siblings. Ofer, like Tommy, had a famous and feted father – Ofer’s father is one of Israel’s leading economists – who is devoted to liberal political causes.

Suicide is the fourth leading cause of death among 15-19 year-olds.

Unlike Tommy, who suffered from clinical depression, Ofer suffered a physical malady – Multiple Sclerosis. Since both his parents were kibbutzniks, he was raised with the ethic of productivity and independence. As his degenerative disease made him increasingly dependent, Ofer despaired of having a meaningful life. In his suicide note, he wrote that he did not want to become a burden on his family.

Tommy’s final note also was a nod to his family: “Please look after each other, the animals, and the global poor for me.” Unfortunately, the scourge of young adults committing suicide is a problem much vaster than Raskin’s family and mine.

The interview heralded the January release of Raskin’s new book, “Unthinkable: Trauma, Truth, and the Trials of American Democracy.” Congressman Raskin lives in the milieu of politics and social action. Yet I was surprised by the ending of the interview, in which he offered political action as the antidote for the depression that engulfed Tommy and threatens so many other Americans:

There are millions of hurting people in the country. We’ve lost more than eight hundred thousand people to covid-19 – which means eight hundred thousand grief-stricken families. There are comparable numbers in the opioid crisis, the epidemic of alcohol and drug abuse, a staggering mental-health crisis. We have to bring people some hope. We have to make it clear that part of the solution to despondency is to engage in politics and to fight back.

Yet Tommy Raskin was engaged in politics. Even as a busy student at Harvard Law School and a teaching assistant, he was involved in anti-war activities, fought against cruelty to animals, and dedicated himself to a host of progressive causes. As his parents so eloquently wrote in their heart-rending statement after Tommy’s death:

Not content with giving half of his teaching salary away to save people with malaria by purchasing mosquito nets with global charities, when the semester was over and after his grades were in and the student evaluations were complete, he made individual donations in each of his students’ names to Oxfam, GiveDirectly and other groups targeting global hunger.

Politics is never an antidote to depression, as I learned in my days as an anti-Vietnam War activist. As a member of the radical left, I saw in my fellow S.D.S. members anger, frustration, and hatred, but never anything that resembled deep joy or inner peace. And how could it be otherwise? Trying to “save the world,” as virtuous a mission as it is, may register some victories – an election won, a piece of legislation passed – but it will never see its idealistic vision completely fulfilled, because there is always another war, another famine, another power-hungry dictator wreaking havoc.

In fact, existential angst may be aggravated by identifying too deeply with the plight of humanity. As Raskin said in The New Yorker interview, “Tommy was someone who felt the pain of other people…. He could stay up all night worried about children caught in the civil war in Yemen. Or children separated from their parents at the border. Or victims of gun violence.” Trying to solve the world’s problems is noble and necessary, but it can bring lasting fulfillment no more than yesterday’s meal can satisfy today’s hunger.

If political engagement is not a solution for the depression that currently engulfs millions of young people, what may be?

An Active Relationship to Spirituality

Prof. Miller, based on a landmark study by psychiatric genetic-epidemiologist Kenneth Kendler published in the American Journal of Psychiatry, defines spirituality as “a sense of a close personal relationship to God (or nature or the universe or whatever term each person used for higher power) and a vital source of daily guidance.”1

This relationship to a God who is all-knowing and all-loving enables the young person to navigate the complex challenges of life. As Miller wrote in her bestselling book, The Spiritual Child, “In a study of spiritual individuation published in the Journal of the American Academy of Child and Adolescent Psychiatry, we found that a developed personal relationship with God (expressed in comments such as, “I turn to God for guidance in times of difficulty,” or “When I have a decision to make, I ask God what I should do”) was highly protective against slipping from experimenting with to addiction to alcohol and drugs.”2

Miller notes that as religiosity in America has plunged, rates of depression have sky-rocketed. Moreover, one of her most astonishing discoveries is that inter-generational spirituality – a shared religious link between children and their parents or grandparents – protects against genetically predisposed depression.

If we want to protect our children from sinking into depression, the greatest service we can render them, more than an example of political action, is developing and sharing a God-oriented worldview. This is a particularly trenchant lesson for American Jews, who in the last two generations have emphasized a social action Judaism more than a God-related Judaism.

The research findings that a relationship with God protects against depression make sense. A person who lives in a Godless universe believes he is at the mercy of random forces and is engaged in a perpetual struggle against human beings driven by an insatiable desire for power and wealth.

A person who has a relationship with God, on the other hand, trusts that although God’s plan is inscrutable, God is directing the world with wisdom and love. Such a God-relating person is inspired to do his part to improve the world, but knows that the burden of solving the world’s problems does not rest on frail human shoulders alone. Such a person works with and for God, connected to a transcendent power that imbues individual lives with inner peace amidst the outer fray.

Of course, there are no one-size-fits-all answers to such a thorny, harrowing problem. Dr. David Rosmarin of Harvard, an expert on spiritual therapy for mental illness, wrote to me: “I don’t disagree with your basic premise. However, for some people, developing a relationship with God is so utterly painful, confusing, and even counterintuitive if not antithetical to their beliefs/values that I would not take a spiritual/religious approach to counselling or psychotherapy with them. Relatedly, some people are not ready to – presently – work on their relationships with others in their family or loved ones or even friends. In other cases, people can cover up their vulnerabilities and needs by forging a 'relationship with God' which takes them away from reality. It's a complex subject.”

My heart goes out to the families of Tommy and Ofer.

Dedicated to the aliyat neshama of Ofer ben Assaf.

Flight 370: Without a Trace
It Takes A Lot Of Faith To Be An Atheist
How Instagram Brought Back This Nostalgic Soup
What Makes Eli Run?
Comments
MOST POPULAR IN Current Issues
Our privacy policy