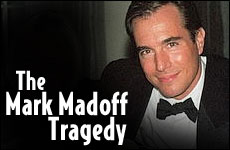 Do the sins of the fathers get transmitted to the children?

The handsome prince had it all.

It was a life of luxury that knew no limits. Private jets, magnificent mansions, unlimited funds to satisfy every whim. The ending? Death by suicide, hanging from his dog’s leash, the body unceremoniously cremated without so much as a kind word recited by way of final eulogy.

That is the remarkable story of Mark Madoff, son of Bernie Madoff responsible for the multibillion-dollar Ponzi scheme that left thousands of unsuspecting investors defrauded of much, if not all, of their life's savings.

The life and death of Mark Madoff is truly a powerful morality tale. But there's one part of the story that begs for clarification from a Jewish perspective.

Journalists and media commentators have been all too quick in declaring that what we've seen here is a perfect illustration of "biblical justice." Whether Mark himself was guilty or not is beside the point, they say; doesn't the Bible itself teach us in the Ten Commandments that God “remembers the sins of the fathers upon the children”?

According to the Torah, does liability for sin get transmitted from generation to generation even if the descendents have done no wrong?

The prophet Ezekiel put it beautifully. “Shall the parents eat sour grapes,” he castigated the people, “and the children's teeth be set on edge?” (Ezekiel 18:1– 3). There is no way God would allow the results of sin to affect the innocent, just as only those who choose to eat sour grapes suffer the natural consequences.

So what is the meaning of the sentence that God “remembers the sins of the fathers upon the children”? While there are a number of different possibilities for what the verse is actually teaching, the explanation that has always spoken most powerfully to me is the one offered by Samson Raphael Hirsch, the prominent 19th century rabbinic scholar.

God takes into account the nature of one's upbringing before passing judgment on the severity of that person's sins.

Whenever God sees someone sin, the Torah tells us the first thing He does is to “remember the sins of the father.” What made the child commit the crime? Was it solely his own fault or was his waywardness due to the fact that he had no proper parental guidance? Was he denied a decent role model by his father and mother? Did he grow up without the benefit of ethical counsel from his elders that could have helped him to lead a life in accord with Torah law? What were the sins of the father that must become part of the total picture determining the extent of the son’s guilt?

In short, what God does is to take into account the nature of one's upbringing before passing judgment on the severity of that person's sins. God remembers - not to punish the innocent but to find a measure of exoneration for the guilty, to mitigate their culpability.

Ironically, the very verse that demonstrates such a great measure of divine compassion is all too often misunderstood as implying a cruel and unjust heavenly system that allows for penalizing the innocent simply because of their biological antecedents.

That is why no one deserves to be condemned for parental crimes, no matter how severe. As of now neither I nor anyone else knows for sure whether Mark Madoff was party to his father's transgressions or not.

Is it possible that he was a co-conspirator in the greatest theft of private investment funds in history? Of course. But without the certainty we need to withhold our final judgment. Mark did not deserve his horrible end simply because he is his father's son.

Let's try to remember the sins of the father as we think about Mark, and perhaps that will allow us to show a little more compassion for him.

PODCAST: Zero Percent: Why Are Jews So Successful?
For Every Individual, A Torah Scroll
Allegiance To The Monarch
Meet the Real You: Yom Kippur
Comments
MOST POPULAR IN Current Issues
Our privacy policy
Aish.com Is Looking for Great Writers