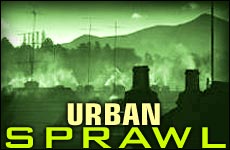 Environmental preservation has been part of Jewish tradition for 3,300 years.

Urban sprawl is a hot topic. Although it has been studied since the 1950s, it has only recently sprung to the forefront of public attention. The December 2000 issue of Scientific American features a study of the problem. A recent poll found that Americans are more concerned about urban sprawl and traffic than crime, employment and education -- which is unlikely to come as a surprise to anyone who has ever been stuck in a sea of traffic on a six-lane freeway.

But the unstoppable spread of apartment blocks, shopping malls, highways and car parks has more harmful effects than mere traffic delays. The environmental impact is catastrophic. Wildlife habitats, wetlands and watersheds have been wiped out all over the place. Pollution of water, and of the most basic necessity, the air itself, has become so severe as to pose a real health hazard. Even the inspiration from the starry night sky has been lost in many places due to "light pollution."

The astonishing thing is that it has taken us so long to wake up. It was years before people were even basically conscious of the issues, and it is taking decades to create legislation and actually get something done about it. Apparently, man is slow to notice and even slower to respond.

There are a variety of approaches to solving the problem. But probably one of the most basic has actually been in legislation for over 3,300 years. In an extraordinarily sensitive ruling, the Torah (Numbers 35:2) instructs that the cities reserved for the Levites are to have a green belt 1,000 cubits wide surrounding a city, and a further 2,000 cubits for agricultural use. Maimonides explains that these regulations apply by extension to all the cities of Israel.

In one fell swoop, this places a stopper on urban sprawl and solves most of its environmental dangers. The city can no longer spread out uncontrollably, which means that there is a limit as to how much traffic and pollution will accumulate. Trees, plants and grass are able to grow, purifying the air and making a better environment for our children.

But environmental legislation should not apply only to city planners. It is something that affects each and every one of us. That's why the Torah lays down laws that govern how every Jew relates to his surroundings.

First and foremost, there is the prohibition of bal tashchit, wanton destruction of the world. According to Jewish tradition, even plucking a leaf from a tree for no particular reason is forbidden.

Another Torah rule, perhaps the most remarkable of all, states that a soldier going out to battle must pack a small spade in his kit. No, this small shovel is not to assist in planting a sapling for the Jewish National Fund. Nor is it to dig a water channel and improve the scenery. Actually, it serves a purpose that is neither openly spiritual, nor a trendy environmental fad. It is for digging a toilet so that his waste is buried and does not lie on the ground.

Incredible! The Torah is a book of religion, wisdom and spirituality. And smack dab in the middle of discussing warfare -- a matter of grave national significance -- the Torah addresses to the lowest of human functions!

Our Torah is called Torat Chaim -- "instructions for living." It gives us practical insights into all aspects of life -- from urban planning, to a soldier's private toilet. With foresight and exquisite sensitivity, the Torah ensures that we act responsibly.

It's a good thing that the world is becoming more careful about these issues. But it's a crying shame that it took so long. Before we rampage out of control with our technological prowess and industrial success, we should eat a slice of humble pie and look to the wisdom that Jewish tradition has imparted to us.

My Sister is Starving Herself to Death
Why My Iranian Mother Didn’t Want Me to Become a Religious Fanatic
The Jewish History of Prague
Why the Sexual Revolution was Bad for Women
Comments
MOST POPULAR IN Current Issues
Our privacy policy
Aish.com Is Looking for Great Writers