Planting and Building in Parenting 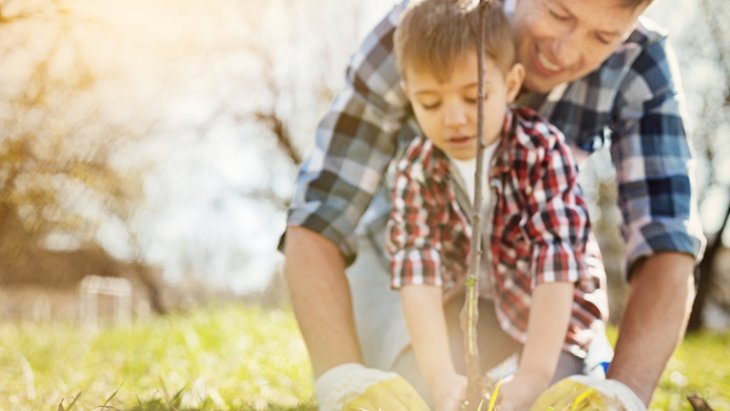 The building process is immediate. When the builder lays a brick, the results are visible right away. However, that brick will never sporadically create a new brick of its own.

Planting entails digging, toiling, watering, and sweating, yet it seems like nothing took place. At one point, a small seedling may become visible, and later a beautiful tree surfaces, which will eventually bear fruit of its own. The goal is to cultivate a plant that will sporadically produce its own fruit.

How your child behaves this very moment (building) is important. However, what is perhaps even more essential is how he or she carries on into the future. The end goal is to raise children who will bring their own light into the world. It may feel like an eternity before that “seed” finally yields a fruit-bearing tree. Sometimes it seems like that seed is doing nothing below the ground, but eventually it surfaces.

A frustrated friend once said to me about her difficult child, “I’m doing everything right, and doing what the books and classes say.” As parents, we may feel dejected when our guidance does not seem to bring any positive changes. Rabbi Lawrence Kelemen writes in To Kindle A Soul, that the planting process is a slow one. In fact, the seed has to rot first before it sprouts.2

We can learn the lesson of patience and persistence from the Chinese bamboo tree. A person plants a bamboo seed and waters and fertilizers it for an entire year, and nothing happens. Another year passes, and they continue to water and fertilize, and still nothing. A third, fourth, and fifth year come and go, and nothing is sprouted. Then, six weeks into the fifth year, the bamboo tree sprouts and shoots up to 96 feet!

If the planter were to have stopped watering it, it would have died. However, since he was persistent, he is able to see the end results – a huge tree! How long did it take for the bamboo to grow? One might respond, six weeks. But that’s not accurate. It took five years of nurturing. During that time, deep roots are forming below the surface to support the large tree.

Nothing is instant in the planting process. Both planting and parenting require years of nurturing and a lot of hidden work.

For parents who have children who create challenges in the home, we must realize that our words, actions, and prayers are not for naught. The spark of your lesson is simply in the recesses of your child’s mind and heart, and eventually it will come forth.

We have to remember that what a child looks like today is not what he or she will look like years from now. And the same may be true of our own inner child. Change is difficult and slow, both in ourselves and our children. Continue planting and digging deep, and eventually good will come from it.

When my oldest son was younger, I would make a major effort to inculcate gratitude in him. Everywhere we went, I would ask, “What do we say?” He would respond ‘thank you’ dutifully. At one point, I wondered if he would ever begin to say it on his own without prompting. I did not have older kids or the experience of another child to know that it could actually happen sporadically.

Then, without even really realizing, it became second nature to him. So much so that when we went to the dentist for a cleaning, I saw my son go over to every person in the office to thank them. And the director of his sleepaway camp called me specifically to tell me how grateful my son was and how he often expressed gratitude for organizing such a great camp. Only then did I realize that the planting had taken root years ago. It only came to fruition years later, though.

So, for those parents with children who are struggling, try to see the big picture and remember that just because your children are not listening today does not mean things will always be like this, even if it takes years to come around.

When we continue to act according to our values, we are by definition planting seeds that will one day sprout.

If we keep sharing ideas for our children’s mind, eventually it will trickle down to their heart and translate into action. Never give up on your children, keep nurturing them with love, and watch them grow.

One of the Best Pieces of Parenting Advice I've Ever Heard

Sit Down and Talk

Passover Seder by the Numbers

7 Simple Ways to Build a Strong Family
Scientific Curiosity and the Divine Encounter
Mind Over Milkshakes
Love the Convert
Comments
MOST POPULAR IN Family
Our privacy policy
Aish.com Is Looking for Great Writers