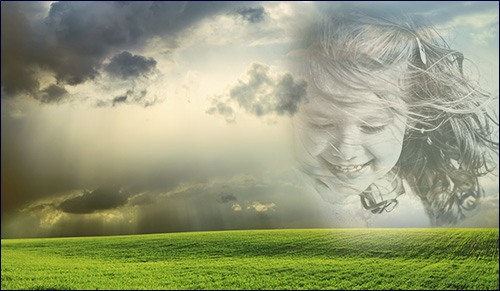 A deadly diagnosis can cut through the fog of petty concerns and yield a striking clarity.

It was one of those mornings. I was up all night on call and exhausted. It was dark and rainy outside, and my three kids woke up late without any recollection that getting dressed is a daily ritual. All I wanted to do was go back to bed, but instead I went through their rooms and chirped, "Wake up sleepyheads. It's a school day, time to get dressed..." with a fake smile and forced cheerfulness.

"Come on sillies," I continued in a singsong voice through clenched teeth, "it's time to get dressed."

After 15 minutes of escalating "reminders," my voice had become oddly falsetto, my oldest son Josh was dueling on his Gameboy, my middle son Joey was using the time to rearrange his furniture and my little angel Julia was color coordinating her shoes.

No one was the slightest bit ready. Ten minutes later, I could feel my heart palpitating in my ears, and I was pinching my palm to keep from screaming. Thankfully, my husband heard the hysteria that tinged my voice and came up to take over. As I walked downstairs I stumbled on a cup of milk left from the night before and gritted my teeth as I watched tiny rivulets of milk drip from one step to the next. Though I had tried deep, controlled breathing, my internal growl was becoming audible.

Joey came down first, red hair sticking straight up and shirt on backwards.

"What do you want for breakfast?" I managed.

Perhaps calling to mind what would be the pinnacle of breakfast experiences, he said dreamily, "I think I'll have marshmallows and yellow M&Ms..." Seeing the wild look in my eyes, he quickly reconsidered. "How about cereal?"

Next, Josh launched his backpack down the banister and I cringed as it landed with a thud and scattered.

Just then Julia, whose pouty lips and dainty features belie her inner strength and persistence, pounded down the stairs wearing her annoying sparkly shoes that with each step discharged red glitter that congealed with the milk mess. She was chanting, "I want peanut butter! I want peanut butter!" The deep breathing didn't work. There was just something about that high-pitched peanut butter whine that did it.

I inhaled one last time, and in my loudest voice, punctuating every word, I bellowed, "IT IS NOT PEANUT BUTTER TIME!!!!"

The house went silent. I heard a muffled giggle. Everyone stared at me. My husband was smart enough not to verbalize the question that played across his face.

I don't know if peanut butter has a time, or when exactly that might be, but I did know I had enough.

Looking Beyond the Chaos

Though I continued my breathing and tried to relax, an hour later my head was still spinning when I went to work.

On my desk was a patient's chart I needed to review. Though I hadn't seen Mrs. Mesa for over two years, I remembered her from my file. She was then around 50, slightly overweight and worked at a sedentary desk job. She joked that her cholesterol might be a bit high because she had just returned from an Alaskan cruise to celebrate her 30th wedding anniversary. I remember how her warm, brown eyes sparkled when she said the extra cholesterol would be worth all the good food.

I was shocked when I got her labs back the next day. It wasn't her cholesterol that was high, but her liver tests -- elevated to critical levels, over five times normal. As I looked at the results I felt like an interloper to a cascading of fates that had already begun in her body.

The straight controlled edges of her "healthy" existence had shattered and contorted into the terrifying uncontrolled shards of illness.

I remember trying to sound nonchalant when I called to tell her we needed to repeat the labs. But I could tell by her halting, pinched questions that she understood that somewhere, in the space of one conversation the prism had shifted. The straight controlled edges of her "healthy" existence had shattered and contorted into the terrifying uncontrolled shards of illness.

The abnormal labs led to an ultrasound, which led to a biopsy, which led to a diagnosis of hepatitis C, which led to liver failure. And now, two years later, I was sending this chart, with its description of a joyous 54 year old mother of three across town to a premier transplant center, where she waited in end stage liver failure, for a precious liver. End stage liver patients all look eerily similar- bloated, bald and greenish yellow. I shuddered when I tried to imagine her that way, and hoped that the sparkle of her brown eyes was able to transcend their sickly amber background.

What haunted me though, was the fact that the hepatitis C had been lurking, undiagnosed for over 20 years since a blood transfusion during the delivery of her third child. I kept wondering if she would have known that a virus was methodically insinuating its deadly genetics into the cells of her liver, would she have lived her life differently?

Would she have stopped even if she were in the middle of making dinner to go outside and revel in the watercolor palate that is a winter sunset? Or if she happened to see a spider web after a rainfall, would she have noticed that it becomes a crystalline latticework in the fledging sunlight? Or, after a frantic, screamy morning rushing her kids to school, would she have looked beyond the chaos and inhaled the sweet musty glow of their laughter and excitement?

It was only then that I noticed the jagged palpitations of my own frantic, screamy morning had receded.

Prism of the Sick

I was thinking about that when I went to the waiting room to call in my new patient -- Elaine, a 28-year-old. I was struck by her elegance as she slowly stood, threw back her head and glided toward me -- her long brown hair, dark skin and green eyes gave her an unusual, exotic look. She had flirted with the elderly people sitting there and they appreciatively smiled and stared as she walked toward me. She was stunning, but something about her was haggard.

She worked on Rodeo Drive selling ridiculously expensive clothing to ridiculously rich people, but like many newcomers to LA, she was hoping to be "discovered." She slumped into my office chair and shook her head wearily. "This city is wearing me down... I'm sure that's why I'm so tired all the time... I'm just so tired."

I was surprised by the innocence and sincerity in her Midwestern twang. "It's so hard, being this far from my family... they're in Nebraska... especially my mom. She really needs me since Dad died. I have two older brothers, but I'm her only daughter."

I glanced up to see the wide peanut butter grin of my own daughter beaming brightly from a frame on my desk.

"My mom made me come, she's so worried. I've been bloated and constipated for about a month. I'm sure it's nothing, but you know how moms are."

Constipation is extremely common, but any change in bowel habit warrants further exploration, so I ordered an ultrasound and talked to her about dietary changes.

I didn't think about it again until about 8 p.m., when a radiologist paged me. The ultrasound showed a mass, he said. He wasn't sure if it was ovarian or colon, but she certainly needed a follow up CT scan. And the cascade had begun.

I shut my eyes and took a deep breath. I was shocked. I knew the possibilities, and none were good: ovarian cancer? Colon cancer? Lymphoma? Though it was late and I was exhausted, I couldn't sleep. I was plagued by the phone call I would have to make to Elaine the next day.

From experience I knew that eventually her eyes would again focus, and it would be on an entirely different reality.

I knew as soon as I would begin to speak, her wistful eyes would blur with terror as she, too, would be forced to look through the prism of the sick. But from experience, I also knew that eventually her eyes would again focus, and it would be on an entirely different reality. Though a diagnosis brings a terrifying disorientation, it also yields a striking clarity. Somehow it cuts through the haze of the trivial and the fog of petty concerns, and what emerges is pure and real.

What I couldn't understand was why does it take a diagnosis to see clearly? I lay awake a long time thinking about that.

The next morning no magic had happened. The kids woke up late and still did not want to get dressed. Joey was busy moving his furniture, Josh was intently beating a bad guy on his Gameboy and Julia was now color coordinating her dresses. And I stood back and watched, as if through a prism.

Nothing was different, but everything had changed.

Eventually, everyone came down dressed, and only a few minutes late. This time though, when I saw Josh's untucked shirt, what I really noticed was his mischievous glint that contained a joyful exuberance as he bounded down the stairs, two at a time. And Joey, with red hair mussed, practically glowed as he proudly beamed, "Mama, I moved all my furniture!" And when Julia rambled down the stairs, the airborne red glitter caught the sun and sparked to the ground like firework tails.

And in that musty, sweet, peanut butter scented morning, I rejoiced.

A Canadian Jew In Australia

The Long and Winding Road

How to Maintain Your Connection with a Deceased Parent
Megillah Gorilla Saves the Day
Challah Reuben “Grinder”
Big OnThe Little Things
Comments
MOST POPULAR IN Spirituality
Our privacy policy
Aish.com Is Looking for Great Writers