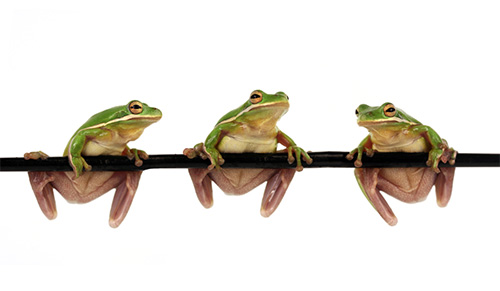 My experience with two of the ten plagues and what they taught me about parenting.

In a small plastic food container.

And the red toy bowl had been officially commandeered for the purposes of this secret mission.

With parental permission I may add (well, sort of.)

And by Friday we were the proud parents of yes, 61 baby frogs.

If you've never seen a baby frog, you haven't lived.

If you've never seen a baby frog, you haven't lived.

We're talking about frogs with post-tadpole depression. Tiny creatures who couldn't croak if you tickled them...

Shachar, our jungle-jumping 9-year-old, had discovered that the big muddy puddle at the end of the street was in fact a "Fast Jump to Success" Bootcamp for local amphibians.

With unbounded enthusiasm, enviable dedication and consummate care and professionalism, he and his friend had lovingly transported these creatures to their new home, a disused green plastic sandpit...

Right next to our bedroom window!

They'd decorated it with stones and branches... put in just the right amount
of mud and water... and could easily have gotten employment then and there as
interior designers for the local zoo.

Certainly beats brain cell degeneration in front of the computer or wrestling your siblings to death...

Anyway, where were this kid's parents I hear you ask?

Well, his mother (not the first person I'd choose to come with me on safari) was convinced she'd wake up to find these creatures all over the house...

And as she was cooking for Shabbat she kept checking there were no “extra
ingredients” in the bowl...

OK, so Shachar agreed to move the little darlings to the far end of the garden.

And his father (who discovered the word 'herpetology' is the scientific study of
reptiles and amphibians) just watched him with great pleasure.

A child totally immersed in something he enjoyed doing...

Blissfully getting mud all over his hands and clothes...

Counting his little babies one by one as if they were a rare collection of baseball cards...

And lovingly preparing their new home as if they were foreign VIPs on a state visit.

We could have said, "Get those things out of here!" "Don't do that. You're getting your clothes full of mud." "Stop it. You're taking them out of their natural environment" or "Your mother doesn't allow it"...

After all, that's what parents are supposed to say, aren't they?

But my wife took a deep breath (or two) while I basked in the kid's simplicity and naivety, dreaming of the day he would become a world-famous zoologist.

Truth is, he wasn't 100lb when he turned up on our doorstep. One of the kids in school was giving it away, Shachar had felt sorry for the cute little puppy and had simply brought him home.

"Okay," said his long-suffering mother, "But he's not stepping one inch inside this house!"

The onus was on me again. Frogs are one thing, but…

Mind you, it wasn't too bad at the beginning, when Shachar could still lift Hetz (Hebrew for arrow) and take him for walks. I just had to schlep huge sacks of dog food up the stairs and schlep the creature to vets for injections and check ups. Ever carried an untrained puppy in your car?

They don't teach you this stuff before you get married.

And it was going to get worse as the canine began to grow.

Eventually reaching a height of almost 30 inches and weighing in at close to 100 lbs. The vet had identified it as a Cane Corso or Italian Mastiff, highly valued in Italy as a companion, guardian and hunter.

In Israel, not so much.

In the Holy Land, Hetz was unfortunately showing less of the guardian and more of its hunter side, jumping on innocent children, barking at everything and even taking a chunk out of my backside on one particularly forgettable occasion.

Mind you, I was being an amazing parent. Many a time did I take the wild beast for an early-hours-of-the-morning-walk in my pajamas just to let the neighbors sleep. Shachar of course never heard him because he'd put the darn thing's kennel right under our bedroom window again.

Credit where credit is due though. Shachar was very attached to him and showed great care, maturity and responsibility for feeding, grooming and the like, but things were getting a little out of hand.

Have you ever tried bundling a 100 lb Cane Corso with stomach problems into your car?

I won’t disturb you with the details.

We paid good money to have the thing trained but there seems to be no Ritalin substitute for dogs yet. Arrow just kept on growing, becoming too big and risky for Shachar to handle.

A decision had to made.

We left it to Shachar. Pure parenting genius…

I will never forget the day we handed Hetz over to the guy who had trained him. He even offered Shachar the opportunity to come and visit him if he wanted but Shachar was heartbroken. He couldn't face it.

He kept Hetz's leash and bowl as mementos and refused to let us throw out the makeshift kennel he had so lovingly constructed.

The kid was absolutely inconsolable.

Even today, over three years later, he doesn't like us joking about his Italian friend.

And that makes me think. Do we really know just how much feeling, depth and potential our children have within their hearts? Why do we sometimes restrict their passion? And can we give them the space and security to share it with us?

It's an ongoing challenge for all parents. But maybe you can start with some goldfish…

Goyish Vs. Jewish, Part 3
Is Grease the Word?
Dried Fruit Compote
Scientific Curiosity and the Divine Encounter
Comments
MOST POPULAR IN Jewlarious
Our privacy policy
Aish.com Is Looking for Great Writers