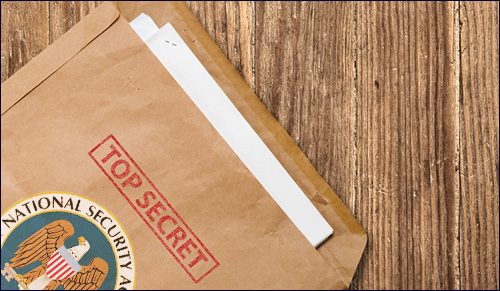 Barbra Streisand is working on a top secret follow up to “Yentl,” in which Yentl becomes a militant vegan. It’s called “Lentil.”

Pssssst! Jewish celebrity secrets have been uncovered by the NSA!

A little back-story, first. What is the NSA?

According to the National Security Agency’s (NSA) website, its mission is to:

So, it’s basically Rambo. But an agency.

The NSA, says its site, helps save lives, defend vital networks, and advance our nation's goals and alliances, while strictly protecting privacy rights guaranteed by the U.S. Constitution and laws.

What’s not to like? Enter one Edward Snowden, who revealed that between February 8th and March 8th of 2013, the NSA collected about 124.8 billion telephone data items and 97.1 billion computer data items throughout the world, including in Germany, United Kingdom and France. The NSA also made 70.3 million recordings of French citizens' telephone data from 10 December 2012 to 8 January 2013.

But what does all this have to do with Jews, I hear some of you asking? (I have very good hearing – even better than the NSA)

Well, as long as you brought it up, and thanks to my ex-girlfriend Sarah, who works in the NSA’s Jewish Celebrity Division, here is a sampling of the secrets the agency has uncovered in the name of saving lives, defending networks and protecting privacy rights:

NSA research has revealed that Oscar winner Daniel Day-Lewis has a Jewish mother, although in a 2002 interview he identified as Agnostic. When his poor mother heard that, she exclaimed, “Agnostic? Over my left foot, mister high and mighty Lincoln! I’d rather be butchered by the gangs of New York than hear you go on like this. Keep up this ‘agnostic’ nonsense and mark my words, there will be blood!” Day-Lewis was last seen hiding from his mother in a room with a view.

Apparently, shock jock Howard Stern’s shtick is just an act. According to the NSA’s surveillance, the real Howard Stern is as far from his show biz persona as the Democrats and Republicans in Congress are from agreeing on Obamacare. At home, Stern spends most of his down-time sipping Chamomile tea, playing chess and reading Elizabethan poetry. He cries openly and unashamedly at endangered species shows on the Animal Planet network. He also opens his home to hosting fundraisers for Republican Congressional candidates.

The iconic singer/actress/director/political activist was recorded by the NSA actually saying to her husband, “Frankly, people who need people are the most annoying people in the world.” It was also found that Streisand’s long-time secret project, still in progress, is an update of her “Yentl” movie, in which Yentl becomes a militant vegan. It’s called “Lentil.” Finally, Streisand’s next musical recording proves her timeless appeal and efforts to stay current. It will be a politically left-leaning hip-hop album including the songs, “The Way We Be,” “Dope Days Are Here Again,” and “You Don’t Bring Me Cornbread.”

A shocking report from the NSA reveals that, unlike most movie stars who go out of their way not to be typecast as their most famous role, Daniel Radcliffe embraces his part as Harry Potter in the eight or so movies in which he played that title character. A sign on his front door reads Hogwarts Home of Witchcraft and Wizardry. One on his bedroom door reads Chamber of Secrets. His drinking glass is labeled Goblet of Fire. And he’s named his dogs Ron, Hermione and Voldemort. If the script found on his desk is any indication, he is currently preparing for a Broadway appearance in a play titled, “Harry Potter is Hamlet.”

The most shocking revelation uncovered by the NSA was the fact that Diamond was a failed songwriter for many years before attaining success with his hits—and that those hits were actually revised versions of his unsuccessful earlier songs. For example, one of Diamond’s first songs not to have sold was, “You Don’t Bring Me Blintzes.” He just couldn’t get anyone excited about his “Girl, You’ll Be a Trucker Soon.” Diamond over-estimated the appeal of the apparently too-ethnic “Song Sung Jew.” Record companies found his “My Mother in Blue Jeans” to be a tad creepy. “New Jersey Woman” apparently wasn’t the right state. And something was just slightly off on “Thank the Lord for the Mai Tai.”

Would it surprise you to learn that Supreme Court Justice Ruth Bader Ginsburg relaxes by reading romance novels while drinking Jack Daniels whiskey? That she was once Tupperwear’s most successful salesperson? That she knows the lyrics to every Rolling Stones song by heart? That she was once ejected from a Grateful Dead concert for refusing to stop screaming out, “I love you, Jerry!” in the middle of the band’s songs? That she delivers her judicial opinions in Yiddish, which is then translated for the other justices—except for Clarence Thomas, who is fluent in Yiddish, too? Well, none of it surprised the NSA, which has heard it all over the years.

Facebook CEO Mark Zuckerberg has been targeted for years by the NSA, which has uncovered several eyebrow-raising future plans for the popular social media outlet. In the near future, male members of Facebook will be able to receive colonoscopies on the site simply be standing close to the screen and activating Facebook’s proprietary colonoscopy laser beam. Similarly, with a new, state-of-the-art scanning attachment, Facebook users will be able to scan their new romantic partners while they sleep, and 24 hours later receive a report letting them know if there is long-term potential to the relationship.

Whenever a celebrity seemingly drops out of site, that’s an immediate red flag for the NSA. Garfunkel’s former partner, Paul Simon, has been quite high-profile over the years, but when was the last time you heard anything about Art Garfunkel? Thanks to recent NSA surveillance, however, we can now be absolutely certain that Garfunkel: 1) is not linked to any terrorist activities. 2) has spent the years since breaking up with Simon trying to find a new singing partner. Sadly, things did not work out for him with Joe Cocker, Aretha Franklin, Justin Bieber, Stevie Wonder, or the Mormon Tabernacle Choir. 3) the hair straightening experiment was a complete disaster.

The Grass is Greener

How to Celebrate Jerusalem Day This Year

The December Dilemma
The Promise Of The Land
Which Chat Are You On?: Parshas Behar/Lag Ba’Omer
Do You Like Slow-Cooked Food? Thank the Jews
Comments
MOST POPULAR IN Funny Stuff
Our privacy policy