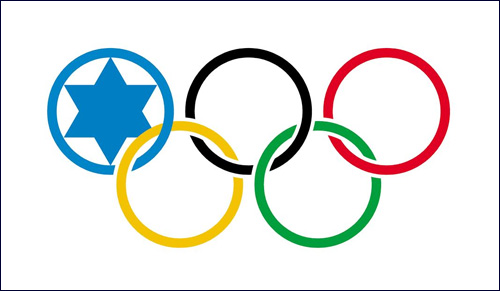 Celebrating Jewish Olympians who stole our hearts, and those who didn’t.

I would like to take this opportunity to briefly salute seven outstanding Jewish American athletes who competed at the Olympics this year in Brazil.

Nate Ebner (Rugby). As a member of the U.S. national rugby sevens team, New England Patriots safety and special teams player Nate Ebner was the only active NFL player to compete at the Rio Olympics this month.

Anthony Ervin (Swimming). Jewish swimmer Anthony Ervin became the oldest Olympic gold medalist in an individual swimming event, at 35 capping a comeback from burnout and drug use in the aftermath of his gold medal at 19. Ervin edged France’s Florent Manaudou by one one-hundredth of a second in the men’s 50-meter freestyle race Friday night in Rio.

Merrill Moses (Water Polo). Team USA Water Polo goalkeeper Merrill Moses, 38 – and on the cusp of turning 39 – remains physically sharp and mentally prepared to play a game where the majority of his team and competition are mostly 20-somethings.

Monica Rokhman. (Women’s rhythmic gymnastics). A rising star in this rising sport is Monica Rokhman, 19, who grew up near San Diego and is the daughter of Russian-Jewish immigrants. She is a member of the six-person team that gave the U.S. its first earned Olympic spot in rhythmic group competition with a 13th-place all-around finish at the 2015 world championships.

Zack Test (Rugby). Zachary "Zack" Test is an American rugby union player who plays for the United States national rugby sevens team. Test is the U.S. career leader in tries scored in the World Rugby Sevens Series. He has emerged as one of the best players on the U.S. team.

These are exceptional Jewish athletes and of course I applaud their efforts and accomplishments and couldn’t be prouder of them.

And yet, being one always to root for the underdogs, the failures, those who have come up against insurmountable obstacles and not overcome them, my heart can’t help but go out to five Jewish Olympians who for reasons I will soon reveal, did not make the team. Still, each of them had a dream, a goal, determination, and spirit. Are they any less worthy of our praise? I say nay. I also say no. And so, with that in mind, here is my humble tribute to the overlooked Jewish Olympians who, like most of us, may not have reached their ultimate goals, but absolutely gave it that old “L’Chaim Try”.

One of the most challenging conditions an Olympian Water Polo player can have is Aquaphobia, a social phobia that is defined as the persistent, unwarranted and irrational fear of water. For Schnur, this affliction took the form of his persistently conjuring up images of dying in water, drowning, gasping for breath, or encountering eerie, unseen things such as snakes or sharks in the water. Schnur experienced a great deal of anxiety around all kinds of water bodies ranging from large oceans to small bathtubs. He cannot even look at a photograph of the ocean without experiencing chills. Still, with that admirable Olympic spirit, his attitude was, “face your fears” and “what doesn’t kill me makes me stronger.” And so he tripled his therapy sessions and gave it his all. Though he did not make the team, those who did will never forget his inspirational spirt and his last words to them: “Watch out for snakes!”

Just before the Olympics Trials began, Esther Feigenbaum’s boyfriend Ezra dumped her because he was apparently having “commitment issues.” While some women in that situation might have turned to drugs, alcohol, therapy, overeating or other self-destructive behavior, Feigenbaum considered herself above all that. Instead, she pretended the volleyball was Ezra’s head and gave it such a swat that it required nearly a five minute walk to retrieve it. Consequently, during important games, Feigenbaum was constantly hitting the ball out of bounds. Try as she would to hit the ball softer, each time she looked down at it, she would inexplicably see the words “commitment issues” written across the ball and she’d subsequently send it on the voyage of a lifetime. Feigenbaum may not have made the team, but she made us all feel her pain.

As was the case with many aspiring Olympians, Irving Zilberschlag’s first exposure to archery was his father taking him along on bow and arrow hunting trips and training him to shoot wildlife and birds. Zilberschlag accompanied his dad on so many of those hunting trips and learned to shoot so well that even after making the Olympic Archery Team, one habit remained. He would shoot an arrow at any wildlife or bird in the vicinity, be it a dog cat, squirrel, crow, pigeon or eagle. He didn’t even have to think about it; his muscle memory would, upon seeing or hearing the creature, quickly draw an arrow across the bow and let it fly, invariably striking its target. When cut from the team, as a kind of penance, Zilberschlag erected a touching memorial to his victims and has launched a successful inspirational speaking career.

From a very poor background where her family was unable to afford the greens fees for her to play on a full-sized golf course, Regenbogen instead did most of her training on her cousin Morry’s miniature golf course adjoining a Chuck E. Cheese. Although Regenbogen became an expert miniature golfer, unfortunately she found her experience would cause her problems once she tried out for the Olympics on a full-sized course. She would, for example, feel at an absolute loss once she realized the full-size course had no obstacles such as tunnels/tubes, ramps, concrete/metal/fiberglass forms, and moving obstacles such as windmills. The regular course seemed, also, to be much larger and more time-consuming to play. And, frankly, she missed being awarded tickets which she could then turn in for prizes of her choosing. Of course, now that he’s no longer on the team, she had plenty of time to do all those things.

Many Olympic athletes have overcome afflictions and challenges on the road to their triumphs. For a while, it appeared as though Pinchas Zingel would be one of them. Having been afflicted since his early youth with a serious tickling problem, Zingel might have chosen a sport that would not place him in constant, close physical contact with others, but no. His passion was always wrestling. At first, Zingel would lose every match after his partner managed to extract himself from any hold Zingel put on him simply by tickling Zingel. And then, while Zingel was hysterically laughing, he’d get pinned. But through a combination of therapy, biofeedback and medication, Zingel slowly managed to get his affliction under control and began winning regularly. The future looked bright until the Olympic Trials, when apparently the stress of the high stakes got to him. The vulnerability to tickling returned and Zingel did not make the cut. But Zingel managed to turn lemons into lemonade. He established The Tickling Foundation and works with athletes all over the world to help them triumph over their tickling issues.