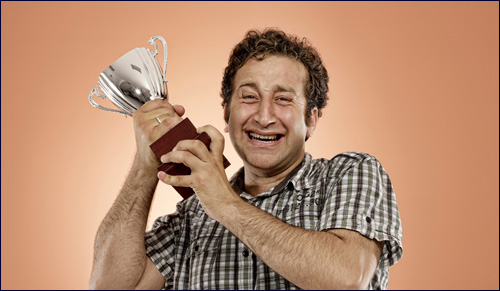 Should synagogues hand out awards like the "Better Late Than Never" Award to curb bad behavior?

Many synagogues have an annual dinner fundraiser during which a few deserving congregants are honored. Certainly, it is a worthwhile endeavor to pay tribute to those who display exemplary dedication to the congregation. These awards and their attendant limelight also may incentivize less active congregants who wish to bask in a similar glow.

Yes, a few award winners may outwardly feign modesty while secretly gloating inside. Yes, other honorees may give acceptance speeches that nearly cancel out their good deeds. Yes, certain recipients have modesty that is inversely proportional to the size of their wallets. All of the honorees, however, are praiseworthy and, if anything, probably do not receive enough credit.

Practically speaking, positive awards at synagogue dinners are not the only way to inspire sedentary congregants. One could argue that, at least in theory, negative awards could have the same effect, albeit one achieved through ridicule. So, the question is: should synagogues hand out not-so-flattering awards to curb bad behavior?

The answer, resoundingly and unquestionably, is NO! Synagogues absolutely should not hand out negative awards, even if the goal is to cure congregational misconduct. There are at least two reasons why negative awards are wrong and should never be considered.

The first reason is purely halachic. Jewish law explicitly prohibits actions that lead to public embarrassment. For example, the Talmud (Baba Metzia 58b), states that "verbal wrong is more heinous than monetary wrong . . . [f]or the former restoration is possible, but not for the latter" (except, in the words of Cher, "if I could turn back time"). The Talmud(Baba Metzia 59a), further states that "he who publicly puts his neighbor to shame has no portion in the world to come" (even if your neighbor screams, in the words of Pat Benatar, "hit me with your best shot. Fire away!"). According to Rambam: "[O]ne must be careful . . . that he not embarrass his fellow publicly, whether a small or great [person].” (Yes, this applies to medium-sized or average people too.) So, negative awards would be anathema to such Talmudic teachings and, of course, it also would make it far more difficult to collect membership dues.

The second reason synagogues should not hand out negative awards is because it would be way too easy. Congregants, like all humans, are imperfect and their flaws are obvious and innumerable. Thus, handing out negative awards is like shooting fish in a barrel, like convincing a child to eat dessert, like playing tennis without a net, like duck hunting with grenades or like trying to worry a Jewish mother.

Bestowing negative awards also would be overly-judgmental and in extremely poor taste. For the record and just so we're perfectly clear, here are some examples of negative awards that synagogues should NEVER hand out:

1. The "Better Late Than Never" Award – for the perennially tardy congregant who is never among the initial ten needed to make a minyan, but who also never comes late to a kiddush.

2. The "Pathetic Pitch" Award – for the most tone deaf congregants who sing at the top of their lungs completely off key and out of tune, thus distracting, disrupting and annoying all within earshot and making everyone long for the silent Amidah.

3. The "Shhhhhh" Award – for the most loquacious congregants who kibitz incessantly like delinquents in the back of the classroom.

4. The "Crazy Kippah" Award – for the person who wears peculiar yamakas including those with a chin-strap or built-in sun-vizor.

5. The "Nudnik" Award – to the men who, for the sole purpose of being annoying, insist on joining the Sisterhood.

6. The "Worst Speech" Award – to the rabbi whose speech on Shabbat was so painful that it was considered as a replacement for water-boarding down in Guantanamo Bay.

7. The "Chutzpah" Award – to the super-wealthy congregant who writes a jaw-dropping check that will eliminate shul dues forever, but conditions the contribution on plastering the family name on every aspect of the synagogue including the doorknobs, light bulbs and children under the age of ten.

8. The "Passover" Award – to the unlucky assistant rabbi who keeps getting passed over for the head gig.

9. The "Drone" Award – to the shul president who drones on and on and whose announcements are longer than the entire prayer service.

10. The "Deficit" Award – to the congregant who is in charge of the annual fundraiser dinner but spends more on the event than is collected in donations.

11. The "Hot Seat" Award – to the congregants who sell their High Holiday tickets on StubHub.

12. The "Missing the Point" Award – to the congregants who build their sukkah out of brick and mortar.

13. The "Dollars over Decorum" Award – to the congregants who want to sell advertising on the mechitza.

Bottom-line: One thing that is nicer than accepting an award in-state is accepting a ward of the state.

It Could be Worse
Scientific Curiosity and the Divine Encounter
Mind Over Milkshakes
Love the Convert
Comments
MOST POPULAR IN Jewlarious
Our privacy policy
Aish.com Is Looking for Great Writers