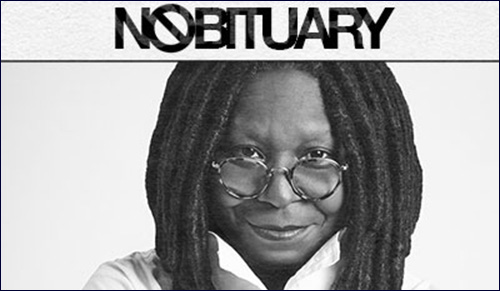 One Jew’s creative way to help people quit smoking. Whoopi Goldberg is on board.

“If you have someone in your life you desperately want to stop smoking, you need to know about this new app. It’s called the Nobituary, and it’s at nobituary.com. It lets you send a life-affirming message to people … so that you’re not writing their obituary,” Whoopi Goldberg declared recently on “The View,” ABC TV’s morning chatfest.

While Goldberg, an American comedian and TV host, is not Jewish, the 20-something creator of Nobituary, a new kind of loving intervention to help people quit smoking, is a member of the tribe.

Ian Wishingrad had the chutzpah to approach Goldberg at a networking event in 2012 and capture her attention saying he had a great idea he’d like her to promote. She had just given up smoking.

“You’re going to get an email from me in five minutes,” Wishingrad, then 27, promised, “and it will say, ‘Nobituary. White Jewish guy,’ then you’ll know it’s me.”

True to his word, Wishingrad fired off an email to the celebrity with a link to the Nobituary video pitch he had created. All day, he anxiously checked his in-box for a reply. Finally, he found Goldberg’s response in his spam folder: “I LOVE LOVE LOVE THIS!!!!!!!!!”

A partnership was born.

Wishingrad went to “The View” the following week, met with Goldberg and her producing partner, and obtained permission to use her name to help promote his app/site, nobituary.com.

The site launched this February in time for Valentine’s Day. “The idea is that if you love someone, one of the best things you can do for them is to help them live healthier, fuller lives,” says Wishingrad.

His hard work began paying off immediately. “The night after it launched, when I was reading all the comments on Facebook, I started to cry,” he admitted in a telephone interview with Aish.com while walking through the Theater District in New York. “I couldn’t believe I did it. I always knew it was a good idea. It was powerful to see people’s reactions.

“I saw a tweet yesterday from a girl in Canada after Whoopi mentioned Nobituaries on ‘The View,’ ” he continued. “She said, ‘Thanks Whoopi. I made a Nobituary for my husband and he quit the next day.’“

Here’s how Nobituary works: Users create a life-affirming message, which looks like a newspaper obituary, for loved ones who smoke — in an effort to help them quit the habit.

Wishingrad believes Nobituaries might help save people by encouraging them not to smoke. He opted for a loving approach rather than scare tactics.

In the spirit of tikkun olam, a Jewish value about our responsibility to repair the world, Nobituaries was designed as a gift to humanity. “It’s not a moneymaker. Everyone has donated their time or talent,” Wishingrad said.

Wishingrad owns a New York creative agency with specialties in branding, advertising and entertainment and he is happy to employ his marketing savvy to help people improve their health.

He used the campaign to make a difference not only for others, but also for himself; Wishingrad quit smoking and wrote his own Nobituary:

“On Dec. 9, 2014, Ian Wishingrad of New York, NY, quit smoking after 7 years. He rejoins his family and friends in life. Ian plans to use the money he saved from not buying cigarettes to enjoy more time playing tennis, and looks forward to vacationing in Montauk. 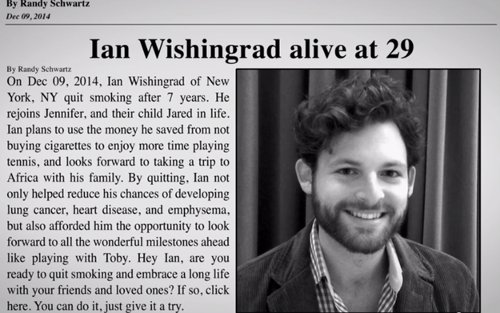 “Quitting not only helped Ian reduce his chances of developing lung cancer, heart disease and emphysema, but also afforded him the opportunity to look forward to all the wonderful milestones ahead. Hey Ian, are you ready to quit smoking and embrace a long life with your friends and loved ones? If so, click here. You can do it, just give it a try.”

Thousands have already written their Nobituaries. “In the past, my creative campaigns have been ephemeral,” Wishingrad mused. “But this is nice. This doesn’t have to go away. The site will remain as relevant as it was the day we launched.”

Not Everyone Deserves a Trophy

We Are What We Say

Our Weakness - the Key to Greatness