New Documentary Explores the Question “Why Be Jewish?” 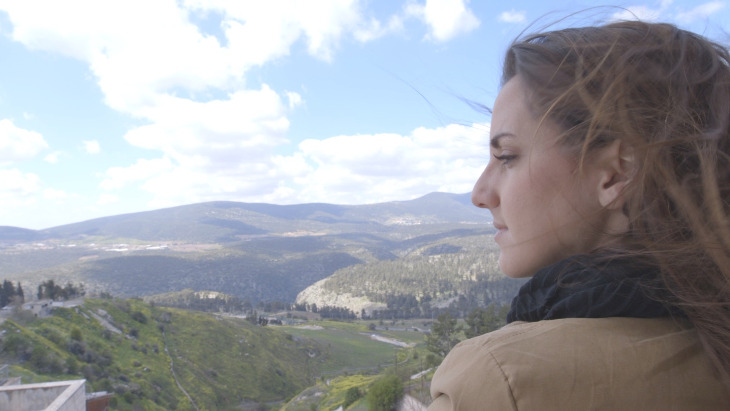 The first intermarriage in Becky Bordo's family launches her journey to explore her Jewish identity.

When Becky Tahel Bordo’s younger sister announced her engagement to a non-Jew, she was shocked but not surprised. Gal had been dating Justin for a long time, yet the reality of Gal intermarrying – a first in the family – triggered a sudden, internal seismic shift in the writer-director. Her need to discuss this decision with Gal, and to explore the meaning of her own Jewish identity, forms the basis of Bordo’s first documentary, American Birthright.

The Bordo family moved from Haifa to Philadelphia when Becky was seven years old and Gal was five. Among the sisters’ earliest memories were of wearing gas masks in the “safe room” of their home during the Gulf War.

“Assimilation trumped tradition in the family,” Bordo explains of her secular upbringing, but Gal’s wedding plans bring underlying concerns to the fore. Bordo discusses the situation with her paternal grandmother, Nechama Bordo, a Holocaust survivor from Romania. When Becky tries to assuage her grandmother that Gal and Justin plan to give their children a Jewish education, her grandmother asks in Hebrew, “What does that even mean these days?”

Meanwhile, Bordo’s mother, Tami Micklin, is not bothered. Raised in an Orthodox home to Moroccan parents, Micklin shed religion as an adult. “I don’t want anyone to give me structure,” she explains to Becky in the film. “I know how to be a good person.”

For a heart-to-heart talk, Becky flies to Grenada where Gal is in medical school. We see the sisters walking on the beach, holding hands, appearing to enjoy a genuinely loving and caring relationship. Still, Becky asks tough questions: “Have you really thought this through? How do you know that Justin is the right man for you?”

Gal answers, “You just know. Do I know that it’s the absolute best decision? I don’t know for sure. But isn’t that life?”

Gal and Justin express a vague enthusiasm for providing a Jewish education to their children, though Gal cannot identity anything she sees as particularly special about Jewish values versus those of other faiths. “No one’s right and no one’s wrong,” she says. She and Justin plan to “find the beauty in the mixture” of their two different faiths. 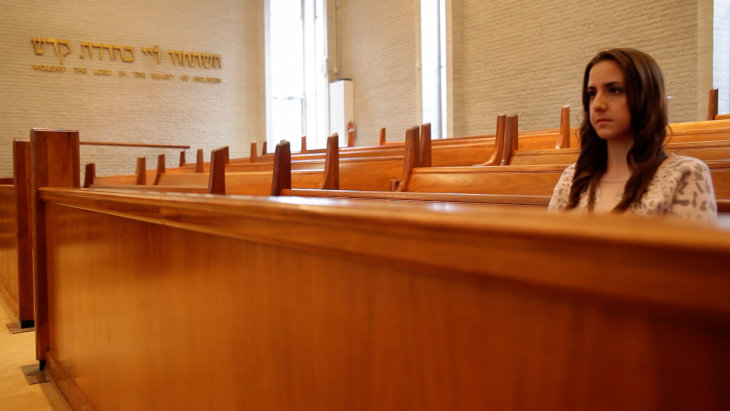 Becky leaves Grenada still feeling torn and forges ahead with a series of interviews with Jewish teachers and leaders from across the Jewish spectrum to discuss issues of intermarriage and Jewish identity. Even the Reform and Conservative rabbis and leaders acknowledge the existential danger to Jewish continuity from intermarriage, with an estimated current intermarriage rate of 40 percent and only 12 million Jews in the world today. Rabbi Neil Cooper, of the Conservative Temple Beth Hillel-Beth El of Wynnewood, Pennsylvania where Becky’s family attended, told her, "We have to look at the critical mass of Jews in this country and wonder how many more generations we have?"

After Gal’s wedding, Becky says, “I realized that (Gal’s) decisions would never soothe my lack of inner peace. All the questions I asked her I’d have to ask myself.” Despite this, she tells Rabbi Benzion Klatzko, founder of Shabbat.com, that she finds Judaism has “too many rules.” Can’t she just celebrate the easy holidays, like Hanukkah?

“Education is the beginning of connection,” he answers after validating her concerns. “If we don’t understand what Judaism is trying to do there’s no way it can speak to us. It becomes just a bunch of OCD practices that can’t and won’t ever overcome love.”

Bordo’s intensifying quest for answers prompts her to take a hiatus from Hollywood. She rolls her suitcase into the dorm of Neve Yerushalayim, a Jerusalem seminary geared for young women with limited Jewish backgrounds. She makes her own “To Jew” list, committing to learning about modesty, God, prayer, Torah, Shabbat and kashruth, and marriage. It’s an ambitious agenda for four months.

Bordo’s interviews with dozens of teachers yield a wealth of wisdom. But the insights shared go by very fast in this fast-paced documentary.

Deborah Waxman, Head of the Reconstructionist movement, tells her, “You can understand halacha (Jewish law) as a burden or as a structure that creates discipline and ultimately creates a lot of expansive space.”

Rabbi David Aaron observes that many Jews have “distorted and disempowering ideas of God,” surrounding the idea of “serving” Him. “We have to delete all that,” he says. “We long to belong to that which is greater than ourselves.” 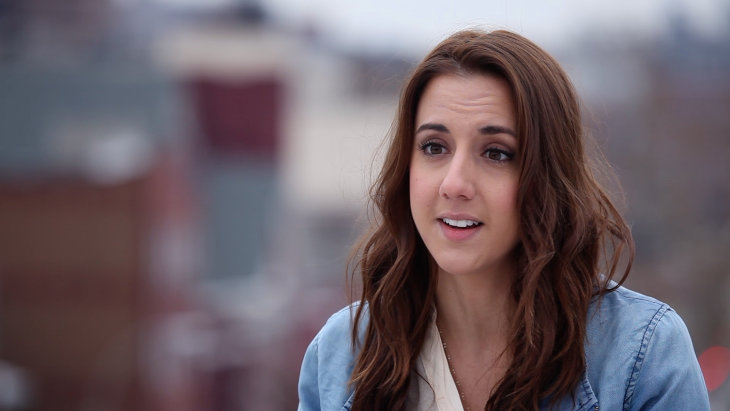 Bordo both appreciates the diversity within the Jewish religious world while also finding that diversity a bit confusing. She begins a prayer practice with the advice of Ilana Cowland, who suggests she simply begin with “please and thank you,” encourages her to view prayer as a conversation with God: “Find a number of minutes that are meaningful and manageable, time to dedicate to the quality of the rest of your day. Say to God, I’m coming into this and I’m ready. I’ve switched off mentally, technologically, emotionally, wherever I was before. I’m completely in this space.”

“I’m fighting to be something. I’m in a process. I’m under construction.”

The documentary project that had been launched as a reaction to her sister’s intermarriage and her own conflicted sense of Jewish identity had soon grown far beyond its original scope. Overwhelmed by all that she is taking in, Bordo admits that she doesn’t know how to process it emotionally. She wonders, “Am I asking the right questions? Will they be answered?” She is determined to continue exploring and seeking truth.

Back in Los Angeles, Bordo is asked if she is Sabbath-observant or keeps kosher, and dislikes what she feels may be an implied judgment in the question. “I’m observing something,” she says. “I’m fighting to be something. I’m in a process. I’m under construction.”

Earlier in the film, a teacher of Jewish mysticism named Doniel Katz challenges her by asking, “Are you not allowing yourself to be curious because you’re afraid of the consequences?” This line resonated strongly within me. When I first encountered Torah classes in my mid-twenties, I was as conflicted as Bordo was. Like the filmmaker, I had been simultaneously drawn toward something I believed was true and crucially important, yet also worried that I might lose myself in becoming more religiously observant.

American Birthright is a significant film that follows an honest and complex search for truth and religious identity. Bordo never pretends a depth of feeling that isn’t her own, and is aware enough to suspect that the enthusiasm she feels in Jerusalem may be an emotion of the moment, one that might not last. She firmly stays committed to further study and exploration. 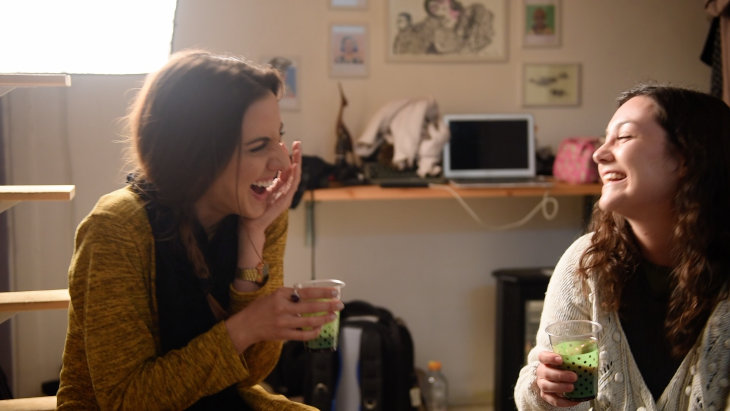 Speaking as the film’s director, she says, “American Birthright chose me during a time when I was grappling with one of the biggest questions of my life: why be Jewish?, a question that initially sounded more like “why marry Jewish?” and shapeshifted midway through its answering. The answers I found altered my reality, and the process I underwent changed me to my core… It is my wish that this film not only inspire but educate about the Jewish tradition in a way that is both intellectual and heart-centered.”

Bordo has received emails, texts, and messages through social media about the film’s impact. “I'm saving all the messages, and it’s been really powerful to learn how people are inspired to question their faith and re-evaluate their relationships."

The Torah in Our Church

Whole, Body & Soul
Vayelech 5783: Regret and Repent
Rabbi Sacks: Focus On the Important, Not the Urgent
Put Your Foot Down: Are Human Feet Poorly Designed?
Comments
MOST POPULAR IN Spirituality
Our privacy policy
Aish.com Is Looking for Great Writers