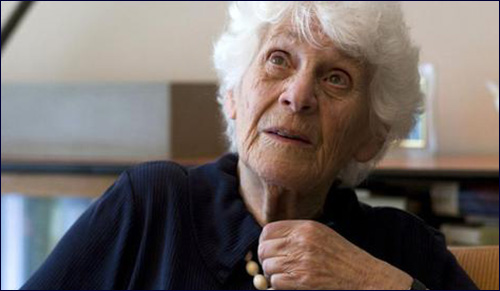 At 102, Ingeborg Rapoport just passed her oral exam for her doctorate that the Nazis prevented her from getting.

A new Guinness world record has just been set.

It shows us how sometimes wrongs can be righted after many decades. It proves that it’s possible for dreams to be realized even in the late twilight of our lives. It is heartwarming and inspiring. But perhaps most of all it reminds us that age is not an insurmountable barrier to great achievements.

Ingeborg Rapoport just passed her oral examination for her doctoral degree. At age 102, professors from the University of Hamburg questioned her for close to an hour on her thesis about diphtheria and were unanimous in their praise. True, the retired neonatologist who lives in Berlin had submitted her original scholarly work back in 1938 but after having her scientific conclusions validated she was not permitted to proceed with the oral exam for “racial reasons.” With a Jewish mother, the Nazis considered her ineligible for academic advancement and her medical career was categorically suspended.

Emigrating to the United States, she would finally be able to achieve part of her dream. She got her MD, married and raised a family. Only her doctorate was stolen from her by the cruelty of Nazi anti-Semitism. But recently, fate intervened. A colleague of her son, a Harvard medical school professor, shared her story with present Dean of the University of Hamburg’s medical school. Wanting to rectify the ancient wrong, the Dean allowed her now to qualify for the long denied degree. Nonetheless, she would have to pass an oral showing her knowledge of present-day advances in the field. And so Ingeborg, with failing eyesight, had friends read to her from the Internet all the current new information about diphtheria. She absorbed it all, retained it sufficiently to overwhelmingly satisfy her examiners and today occupies the unique record of being the oldest person, at the age of 102, ever to receive a doctoral degree.

Grandma Moses and the A Team

Of course old age is not always so kind. For many, Robert Browning’s words to “grow old along with me, the best is yet to be” seem more wishful thinking than realistic possibility. Yet, it bears noting that some of mankind’s most remarkable achievements came from those already far advanced in years.

Much has been written about Anna Mary Robertson Moses, better known to the world as Grandma Moses, a woman who didn't begin to paint until the age of 76, when her hands became too crippled by arthritis to hold an embroidery needle. She found herself unable to sit around and do nothing, after a long life spent working on farms, and without any formal art training began a career spanning over a quarter of a century which would make her an internationally renowned figure whose paintings were praised by President John F. Kennedy as “inspiring an entire nation.”.

There have been many others who made a powerful impact on the world even after becoming octogenarians. At 89, Arthur Rubinstein gave one of his greatest recitals in New York's Carnegie Hall. At 89, Albert Schweitzer headed a hospital in Africa. At 88, Pablo Casals was giving cello concerts. At 88, Michelangelo conceived some of his greatest architectural plans. At 85, Coco Chanel was the head of a fashion design firm. At 84, Somerset Maugham wrote Points of View.
At 83, Aleksandr Kerensky wrote Russia and History's Turning Point. At 82, Winston Churchill wrote a History of English Speaking People. At 82, Leo Tolstoy wrote I Cannot Be Silent. At 81, Benjamin Franklin negotiated the compromise that led to the adoption of the U.S. Constitution.
At 81, Johann Wolfgang von Goethe finished Faust.

But there is one more octogenarian who truly changed the history of the entire world. Grandma Moses may have inspired a nation but Moses the lawgiver, Moses the leader of the Jewish people, Moses who spoke “face-to-face” with the Almighty without doubt transformed all of mankind.

And perhaps of all the messages which Moses would bring to the world, the one most closely linked with his age at the time of embarking upon a new career in life might well be the most inspiring. Age brings with it its own list of infirmities. Yet it also endows us with a kind of wisdom unknown to the young. It continues to offer us challenges and new opportunities. We may be too old to run marathons but we are never too old to dream dreams – the dreams of Ingeborg Rapoport, of Grandma Moses, and of all those who showed us that life offers ongoing trials, opportunities and blessings.

Caring for the Chronically Ill

7 Ways to Live Better This Year

Earth, Wind, Fire & Water: The Four Elements of our Inner World
The Strange Face of Change
The Grand Mufti of Jerusalem and the Holocaust
The Connection between Israel and the Jewish People
Comments
MOST POPULAR IN Personal Growth
Our privacy policy

The Strange Face of Change
The Grand Mufti of Jerusalem and the Holocaust
The Connection between Israel and the Jewish People
Grit and Torah
Why We Can’t See True Reality
Jewish Chutzpah’s Ancient Precedent: Commoner Sues Toxic Boss 2600 Years Ago
Grilled Israeli Lamb and Veggie Kabobs Recipe
How To Barbecue Like an Israeli
Pain is a Reality; Suffering is a Choice
The Promise Of The Land
1 2 3 … 2,980 Next »