Myth: Religious Jews have Sex through a Hole in a Sheet 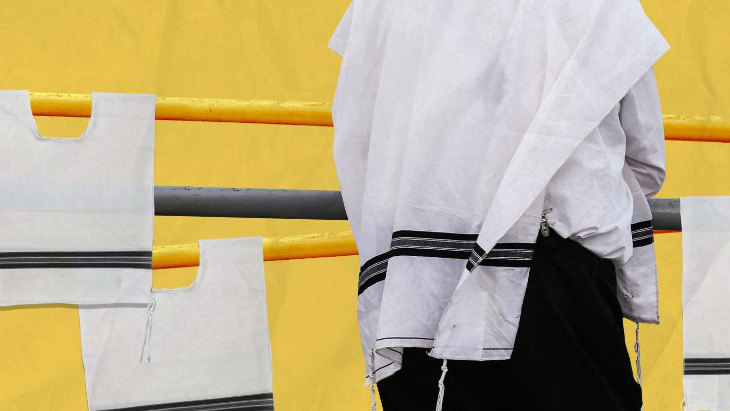 This myth probably comes from people passing through Jewish neighborhoods and seeing something called “tzi-tzit,” which are a religious garment Jewish men wear under their shirts, drying on clotheslines. Tzi-tzit are a four-cornered garment, and look like a sheet with a large hole in the middle (the hole is for the head). Tzi-tzit are difficult to wash, and it's best if they dry naturally on a clothesline, as opposed to drying them in a dryer.

If you're walking through a Jewish neighborhood, see something drying that looks like a sheet with a large hole in the middle, don't know what you're looking at, and let your imagination run wild, it's easy to conjure up an explanation like, "Obviously, religious Jews have sex through a sheet."

With that type of intense, holy experience, you’re not going to diminish it by adding a layer of separation, like a sheet.

The reality is just the opposite. In real life, a couple is supposed to experience literal closeness, and that’s because intimacy is holy (no pun intended).On a deep, mystical level, Judaism understands the sex drive, which is a longing for physical closeness, as parallel to your longing for spiritual closeness. It’s the reason many people use the same words to describe both sexual and spiritual experiences like unity, oneness, closeness, and intimacy. In a sense, sexual intimacy is a unity of the spiritual and physical, and that’s about as intense as it gets.

And with that type of experience, you’re not going to diminish it by adding a layer of separation, like a sheet.

Even if it has a hole in the middle.

Is Judaism a Race, Religion, Family or Nation?

Why the Afterlife Isn’t Mentioned in the Torah

Urban Myths and Misconceptions about Judaism
Where do the laws of nature come from?
Saadiah Gaon, Rashi and Maimonides: How Three Rabbis Revolutionized Judaism
King Sennacherib and the Siege of Lachish
Comments

Where do the laws of nature come from?
Saadiah Gaon, Rashi and Maimonides: How Three Rabbis Revolutionized Judaism
King Sennacherib and the Siege of Lachish
Three Small and Easy Changes to Add Positivity in Your Home
Breaking Barriers and Baking Babka: How One Jewish Mom Became a YouTube Sensation
Pletzel Recipe
My Precarious Self-Esteem
Faith: A Lot Deeper Than You Think
The Pletzel of Paris and The Bread That Shares Its Name
The Softball Player
1 2 3 … 2,900 Next »