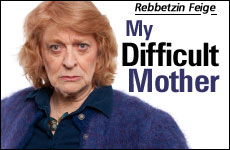 Help! My mother is hyper-critical and chipping away at my sanity!

I come from a very united family, one who spends every Shabbat together, and who sees each other more than once a week. I have always had a tense relationship with my mother since we do not see eye to eye in most situations. Now I am married with two children. My mother loves to visit and play with them but she always gives too much advice and often not in accordance with the way I want to raise my children or live my life; especially since right now I am working a demanding full time job and am not able to spend as much time as I would like with my children. Something which she believes is a terrible situation, but I am doing it because of a monetary need.

Every time I visit my mother with my kids it gets very tense because she doesn't have that much patience. She gets stressed out a lot because they are toddlers and are quite messy and hyperactive. Also, this is on Saturdays which is my only day off and I want to rest, so I want her to help me out a little with the kids. She is always trying to find something wrong with my kids, either their eating habits, or the lack of stimulation of the lack of extracurricular activities they are enrolled in. This hurts me and my husband very much.

Related Article: To Mother, With Love

Sometimes we choose not to visit at all and suddenly everything is peaceful again. I don't want to stop visiting my mother with my kids in order for my life to be more peaceful. I want to find a way to do both but I have been trying for many years and it doesn't seem to be improving. This also strains my relationship with my husband since she is very critical of him also. How can I find a balance between honoring my mother and allowing her to spend time with her grandchildren but at the same time maintaining my sanity and shalom bayit (peace in the home)?

You are juggling many things in your life and a hierarchy of importance must be established:

1. The fact that there is peace in the home when your mother is absent leads me to believe that your marriage is intact. Husbands come first!

2. Toddlers under the best of circumstances, delightful as they may be, can also be a handful and very challenging. Networking with other mothers in similar situations might provide helpful coping tips.

3. Full time work, under these circumstances, is not the most desirable of situations. You cite monetary reasons and only you can be the judge of how significant the need is. You well know that as a general rule there is no greater gift one can give children (especially young ones) than being raised, nurtured, loved and cared for by their parents. If it would be at all possible, considering your situation to cut down on expenses so that you can spend more time with your children, the benefit for them would be huge. Parenthetically, studies have shown time and again the value of children raised by their biological parents. If this is not possible at the moment, do not add guilt to the mix. You are trying to be the best mother you can.

4. Finally, your mother. I think a combination of boundaries and attitude might be the answer. Let’s discuss attitude first. Eleanor Roosevelt so wisely said, “Nobody can make you feel inferior without your consent.” It appears that you have allowed your mother to wield way too much power over you. The relationship with a mother is tough under most circumstances but yours pushes your buttons in a major way. All of us, dear reader, seek the approval of our mothers and that is the source of their power. I would recommend that instead of being defensive with your mother, feeling criticized and put down, you might defuse the situation by the following:

You have allowed your mother to wield way too much power over you.

Be aware, as well, that our feelings begin with our thinking. If we are feeling unkindly disposed towards another individual, the likelihood is that we have decided to allow negative thinking to take charge of our minds. It can be very effective to check out one’s thoughts and recognize the negative charge they contain. The recognition itself already puts us in the driver’s seat. We can realize that since we are the thinkers we don’t need to be thinking aggravating thoughts that we don’t want to be thinking. We can drop the thoughts that have a negative spin on our life.

Consider Harriet whose mother-in-law was someone who could legitimately be referred to as a “wretched woman”. In her defense, her mother-in-law had experienced a painful childhood, had been rejected by her father and she suffered many dislocations. She was brilliant, learned and a philosopher of note, yet the scars of her past exacted their due and her achievements mattered little.

Her daughter-in-law, Harriet, came into the family starry eyed, innocently expecting to cultivate an ideal relationship with a woman who appeared to be so worthy a person. It took Harriet a long time to realize that her mother-in-law’s personal misery had turned into venom directed at her; she had become the target. Fortunately for Harriet, she came from a functional loving family and her parents, though they lived at a distance, advised her not to obsess but to minimize to the best of her ability her thinking and preoccupation with her mother in law, whose problems predated her coming into the family. Most importantly, they helped her understand that her mother-in-law was not likely to change.

The young woman worked hard to incorporate their advice and turned her attention to productive pursuits. With time she came to realize that her mother-in-law was a woman to be pitied. As a result, on occasion Harriet could even muster compassion rather than resentment. Harriet had broken the chain of her mother-in-law’s hold on her life by letting go of her own negative thinking.

Dear reader, try the above suggestions, but be assured that while your obligation to your mother consists of dealing with her respectfully, it does not extend to allowing her to destroy your shalom bayis. Finding a therapist or an independent party to talk to so you can clarify your personal thinking could be hugely helpful.

What I have found to be even more effective is if you and your mother would agree to see a therapist together. A third party would keep the interaction civil and help both protagonists stay on course. The therapist could be the objective voice who could broker an agreement on boundaries and other needs that come up. One would also be able to appeal to her when a troubling situation or a violation of the agreement would arise. Good luck and remember the power of counting one’s blessings in one’s life.

The Inner Struggle
Lessons from the Book of Jonah
Where Are We? The Body, Brain, Soul Problem
Dr. Sheila Nazarian’s Escape from Iran
Comments
MOST POPULAR IN Family
Our privacy policy
Aish.com Is Looking for Great Writers