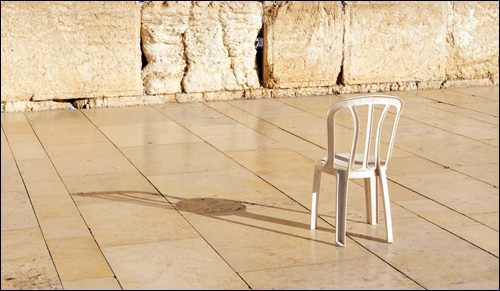 At the only place I felt true peace, a small miracle happened.

Ruth Siegel and I had been best friends since childhood. She had an infectious laugh and twinkling blue eyes. My mom said we were “thick as thieves.”

For years, we had wanted to travel to Israel and see Jerusalem. Finally, one summer, we made our dream come true.

Jerusalem is beautiful. By law, every building in the city is made with a special pinkish-gold stone known as “Jerusalem stone.” At dawn and sunset, the entire city simply glows. It’s breath-taking.

We couldn’t wait to pray at the Western Wall, so on our first day in Jerusalem, we took a bus there. The bus driver knew English and was very helpful.

We wended our way through the winding stone-paved alley-ways of the Old City until we reached the Western Wall. From the promenade in front of where the worshippers prayed, we gazed at the edifice in awe. For thousands of years, Jews held the Western Wall in their hearts, and now we were actually here!

We hurried to the area where the women prayed. Ruth had brought her siddur – prayer book – with her. It had belonged to her mother, may she rest in peace. I, myself, did not have a prayer book, but there was a little room off to the right side of the women’s area that had prayer books, so I went there and looked for one that had both English and Hebrew in it. I couldn’t read Hebrew, but how could I possibly pray at the Western Wall without holding Hebrew in my hands?

We went up to the Wall itself, touched it and felt its coolness. We saw many tufts of greenery clinging to the cracks in the Wall, growing there from seeds carried on the clothing of tourists from around the world. And we saw the many pieces of folded notes stuck into the cracks of the walls, containing heartfelt prayers to God. I left a note, myself, asking God to help me find my beshert – my “intended one,” or soul-mate.

Ruth placed a note in the Wall, too, but she wouldn’t tell me what she prayed for. That was unlike Ruth, but I respected her privacy. “I feel at peace here,” she said. I did, too. An overwhelming peace.

Finally, we backed away from the Wall, facing it with respect, until we had exited the praying area and were back on the promenade. We spent the rest of the day taking buses around to see the sights of Jerusalem.

That evening, when we returned to our hotel, Ruth noticed that her prayer book was missing. “Oh, no!” she cried. “I must have left it on a bus!” It was not only her prayer book, it had been her mother’s too. Ruth was deeply saddened that she had lost it. That was the only thing that marred our trip to the Holy Land.

A year later, Ruth died of cancer. I could now imagine what she had prayed for at the Western Wall. I was devastated at losing my best friend. A year after that, I was still mourning. I decided to return to Jerusalem, to the Western Wall, the only place I had felt true peace, and ask God to help me with my grief.

When I got to the Wall, I realized that again I didn’t have a prayer book with me. So I went into the little room where they keep the prayer books and searched for one that had both English and Hebrew in it. So many Hebrew ones! But then I saw a familiar brown cover and opened the book. It was in English and Hebrew, and written inside the cover were two names, “Sarah Goodman Siegel” and “Ruth Siegel.”

Tears of joy and gratitude streamed down my face. Ruth was still with me.

Flash of Light
Korach 5782: Visit to Lift the Spirit
That Time The Ivy League Found A Way To Limit Jewish Enrollment
Would You Rather Be Right or Happy?
Comments
MOST POPULAR IN Israel
Our privacy policy