On the Scene of a Terror Attack 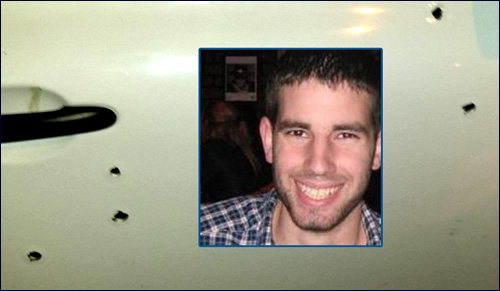 The harder the enemy hits, the stronger we will get.

Thirty days have passed since the death of Malachi Rosenfeld, the 25-year-old Israeli murdered in a brutal drive-by shooting while returning home from a basketball game.

No matter how I try, I cannot erase the horrific scene from my mind.

It all started when I got the night off from IDF reserve duty where I was serving in the Negev desert. I drove the two and a half hours to my home. I turned at the intersection close to my home, thinking of how many times we've requested better security there. I drove up the hill and arrived home. My kids were so happy to see me, jumping on me with joy. After I kissed them goodnight, I stepped into the shower (it had been days since such a luxury) when my phone rang.

The ringing wouldn't stop. I stepped out and heard: "Shooting at the intersection" – the one I'd just drove by. I put my smelly dirty uniform back on, jumped into my army boots with out tying them, and yelled to my wife to bring my bulletproof vest – fast!

For a moment, I was in shock. I was half-expecting her to ask me not to go, but she knew what needed to be done. We've prepared for situations like this before. I threw on my vest and grabbed my army-issued M16. While I was running out the door, I yelled out: "Lock the door, keep a gun under your pillow, and everything will be fine!" Such is life in Israel.

I was driving far too quickly and in less then two minutes was at the intersection. A car on the side of the road had multiple bullet holes. A man in a basketball uniform was laying on the ground with someone holding his head, trying to help him breathe. Someone else was tightening a belt on his upper thigh to stop the blood.

I noticed a torn shirt on the floor filled with blood. I picked it up and applied pressure to the wounds. His chest was moving up and down, so I knew he was breathing. More and more cars were coming, stopping in the road and trying to help. Soldiers came and stood on the side of the road scanning the dark fields. Perhaps the terrorists were still out there hiding in the bushes.

Another victim was lying 10 feet from the road, having run away and collapsed.

We put the victim on the stretcher. I looked at the road – crowded now with dozens of cars that came – and there was no way for the ambulance to get out. I walked fast down the road, banging on the cars and yelling: "Move to the side so the ambulance can get through! Now!" Moments later the ambulance zoomed by.

I walked back to the scene to see three other victims. I recognized one injured boy from a neighboring basketball team that we'd played against two weeks ago. He was lying in the bushes about 10 feet from the road. He had tried to run away from the shooting before collapsing.

With enough people taking care of the victims, I decided to document the incident by taking pictures. It is important that the world can see the terror going on in my backyard. I carefully took out my phone and subtly took the photos, making sure that there were no faces of the injured. I even made sure not to get any numbers on the back of the basketball uniform; I didn't want a mother finding out through the media. As bad as I felt taking pictures while people were bleeding on the ground, I felt it had to be done.

After all the injured were taken away, I went back to my car and removed my heavy vest that was now full of sweat. I saw the security team commander. He asked me to sit by his military radio to help him with all the incoming calls that were continuing nonstop.

The next day, we buried the vibrant Malachi Rosenfeld, beloved friend and neighbor. This is the second time the Rosenfeld family has been struck with tragedy: Malachi’s older brother Yitzhak (Menachem), a pilot in the Israeli Air Force, died in 2002. “Malachi took the big brother role upon himself. He gave a lot of love to the younger children in the family,” his parents said.

It could have been me shot and lying in a pool of blood on that road.

In the ensuing days, arrests were made of the Hamas terror cell that committed this heinous crime. However the ringleader, Ahmad Najar, was not arrested. After his release as part of the Gilat Shalit deal, Najar moved to Jordan where he has been organizing and funding terror attacks against Israelis.

On the night of Malachi's murder, at about 4 AM when the roads finally cleared and the calls slowed down, I drove home. My hands still dirty with blood, I turned off my car and sank down deep in my seat. I couldn't imagine going home to my comfy bed. How could I? It could have been me shot and lying in a pool of blood on that road.

Then I realized that life must go on. And the harder the enemy hits, the stronger we will get.

Aaron Katsof is the Director of The Heart of Israel

Sorry, I Can't Come to Your Wedding

Praying for My Soldier
The Promise Of The Land
Which Chat Are You On?: Parshas Behar/Lag Ba’Omer
Do You Like Slow-Cooked Food? Thank the Jews
Comments