Women and Mitzvot in Judaism 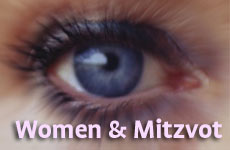 Success in life is predicated on two distinct undertakings: On one hand, an organism must advance and expand. On the other hand, it must protect and nurture. These two undertakings are opposites, but both are necessary for success. No football team could succeed with an excellent offense but no defense. The same is true on every level of societal and personal existence. It was with this theme that God created two distinct genders, to work together in unison to accomplish their ultimate goals.1

In the 1990s, John Gray's bestseller asserted that relationships can only be successful if gender distinctions are recognized and adhered to. For millennia, Jewish sources have taught that women's physiological and psychological needs are different from that of their male counterparts. In God's infinite wisdom, he delineated different responsibilities for men and women according to their respective metaphysical and physiological needs.2

Unlike other religions where the church is primary, Judaism treats the home and synagogue as being co-equal. Some of our most important rituals belong exclusively to the home, such as the Seder, the Sukkah, the Sabbath table, and the Chanukah menorah. The continuity of Judaism rests on the home more than anything else.

Throughout the ages, Jewish women have imbued spirituality into the Jewish home. As such, certain mitzvot are set aside especially for women because of their special connection to the home.3 Family purity laws, candle lighting on Shabbat and holidays, and the separation of challah are rituals that women always observed with particular pride and meticulousness.

And of course, Jewishness itself is passed on via the mother. If the mother is Jewish, the child is 100 percent Jewish.4

Pillar of the Family

Since the beginning of mankind, all societies have recognized that a woman's sensitivity and warmth are ideally suited for motherhood. Moreover, the extraordinary feeling that men can never experience – nurturing a baby inside them – puts women in the position of being the best, most loving caregivers for their children. For the preservation of the family structure, and by extension the overall health of society, the Torah encourages women to embrace this role.

In this vein, the Torah released women from the obligations of certain time-bound mitzvot. This is not because of any difference in the level of sanctity between men and women.5 Rather, these exemptions allow a woman the ability to be totally devoted to her family without the constraints of having to fulfill such mitzvot at the correct time.6 Of course, whenever a woman does not face conflicting family obligations, she may fulfill these mitzvot and receive eternal reward.7 Whatever the case, she is fulfilling God's will, who knows that her spiritual growth is intertwined with her primary mission as the family cultivator.

Women are also required to perform all positive mitzvot that are not time-bound,13 e.g. mezuzah, returning lost items, etc.14

Regarding certain mitzvot, although a woman is technically exempt, women have historically accepted the performance upon themselves. This is the case with hearing the shofar on Rosh Hashana,15 sitting in the Sukkah on Sukkot,16 and taking the four species. But this should not come at the expense of family life.

The mitzvah of tefillin is exceptional and may not be performed by women.18 The commentators explain that as tefillin is one way to connect with the Creator, women establish this link in a much more meaningful way than donning tefillin. When a man wears tefillin, he manifests that which a woman can accomplish naturally by carrying a child within her. Kabbalistically, the tefillin's hollow chamber corresponds to the womb, and the straps correspond to the umbilical cord. Interestingly, the tefillin box is called the bayit (home). Thus, one can say that the home a woman develops is her private tefillin.19

Similarly, it is forbidden for women to wear a tallit, as this is considered a "man's garment."20

King David declared, "All the glory of the King's daughter is found on the inside."21 The regality and nobility of a woman emanates from her privacy and dignity. A woman's choice of dress and behavior should be reflective of her natural dignity. For more on this topic, see Laws of Daily Living - Kosher Clothes.

How often do Jewish women pray?

Jewish women22 have long been praised for their ability to speak from the heart and pour out emotions to God. The prayers of the biblical Chana and other women serve as the source for many principles of Jewish prayer.23

Because formal prayer is largely time-bound, a women's obligation of prayer differs significantly from that of a man. A women's obligation of prayer is superseded by her role as the pillar of the family. Whenever there is a conflict, the needs of her family come first. Of course, whenever it is possible for a woman to juggle her family responsibilities and still pray meaningful prayers, she should do so.24

According to most authorities, a woman should pray at least Shacharit, including:25

Women should also try to pray the Mincha afternoon service.26

Traditionally, a Jewish woman – from the moment that she woke up until she fell asleep at night – always had a prayer upon her lips.27 She would entreat God as she dressed her children and sent them off to school. She would murmur Psalms as she would tidy up the house. She would even submit a silent prayer for the success of the food that she was putting into the oven. What every woman instinctively knew was that prayer needs no formalities; the Almighty just wants us to speak to Him.

Of course, women are welcome to come to the synagogue if it will make her prayer more meaningful, and it is a mitzvah to so when there are no other conflicting responsibilities.28 It is regarded as out of place, however, for women to assume a public role in the prayers such as leading the services, being counted in a minyan,29 or getting called up to the Torah.30

Mothers should especially pray for the welfare of their children.31 A particularly appropriate time for this is when lighting Shabbat candles.32 Here is the text of a traditional prayer to say when lighting the candles:

May it be Your will, Lord my God and God of my fathers, to be gracious to me (and to my spouse, children, parents) and to all my family. Grant us and all Israel good and long life. Remember us for good and blessing. Consider us for salvation and compassion. Bless us with great blessings. Make our household complete, crowning our home with the feeling of Your Divine Presence dwelling among us.

Make me worthy to raise learned children and grandchildren, who are wise and understanding, who love and fear God – people of truth, holy and attached to God, who will dazzle the world with Torah and goodness and service of God. Please hear our prayers, in the merit of our matriarchs Sarah, Rebecca, Rachel and Leah, and ensure that the glow of our lives will never be dimmed. Show us the glow of Your face and we will be saved. Amen.

According to God's Will

In the morning blessings, there is one blessing that only a woman recites:

Blessed are You, God our Lord, Who has made me according to His will.33

What is the explanation for this blessing?

As the primary creators and nurturers of human life, women more closely resemble God than men do. When a woman makes the blessing thanking God "Who has made me according to His will," she recognizes that her will is like His will.

Each mitzvah is a special opportunity to grow spiritually. The man is thanking God for providing these opportunities, as:

With each of these three blessings, the man shows an increasing gratefulness for opportunities to serve God in performance of the mitzvot.

A woman, who is inherently more spiritual, as we explained previously, does not need as many "tools" to become close to God, and thus – with a sense of satisfaction – she thanks God for "making me according to His will" – i.e. just the way I am.34

One of the mitzvot in which a woman's obligation differs from a man's is Torah study. Jewish men are obligated to study the entire Torah – both the practical and the theoretical. The pragmatic nature of women, as well as the demands of family responsibilities, obligate women to know only practical halacha35 – e.g. the pertinent laws of prayer, Shabbat, holidays, fast days, family purity, kashrut, interpersonal responsibilities, forbidden speech, etc. A Jewish woman must also know the Bible – for her own knowledge, and in order to impart the values and ethical lessons to her family.

A Jewish woman must also be well-versed in the books relating to Jewish thought that deal with faith in God, and character trait development, such as the talmudic tractate, Pirkei Avot.

For this reason, women recite the blessings on Torah study every morning.36

Men and women are both obligated to repopulate the world.39 But men have a technical minimum requirement of fathering at least one son and one daughter.40 Thus, if a man has 10 sons and no daughters, he has not yet fulfilled his requirement. Women are not bound by this technicality,41 yet she fulfills an important mitzvah with every child she bears.42

As a Jewish home is a unified entity, it is very important to retain the concord among family members. Therefore, all members of a household should follow the same traditions. Consequently, a married woman follows the meaningful traditions of her husband in most cases.43 For example, a married woman should adopt her husband's Passover customs, version of the prayers, etc.44 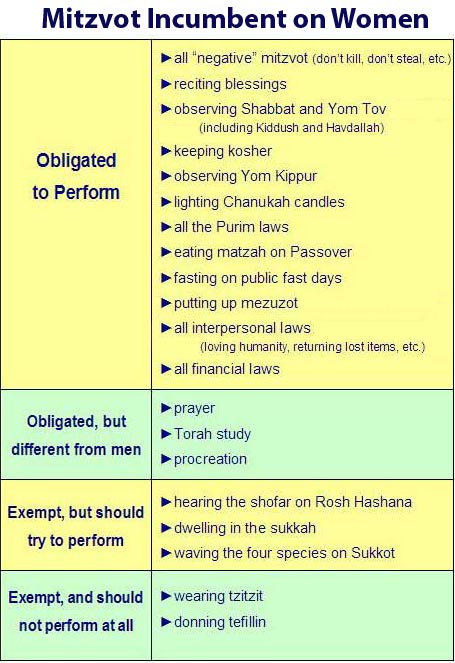 Jewish Holidays: Tu B'Av, High Holidays and Sukkot
The Blue Beyond
Great Place to Live
Is Eating Supposed To Be Spiritual?
Comments
MOST POPULAR IN Jewish Law
Our privacy policy