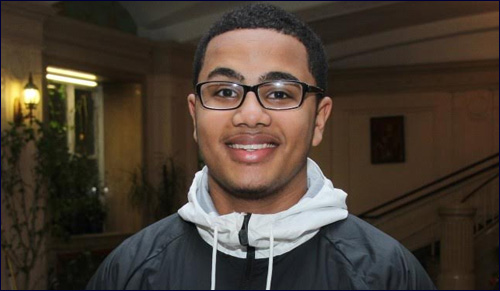 Aish.com talks with Ahmed Khalifa who courageously pursued and help arrest the attacker of a Jewish woman on a NY subway.

After chasing down a man who attacked an Orthodox Jewish woman in Brooklyn, many are hailing Ahmed Khalifa, a 17-year-old Muslim immigrant, as a modern day hero. “I’m just like normal,” insists Ahmed Khalifa in an Aish.com exclusive interview. “Everyone should be doing what I did.”

On Wednesday, December 28, 2016, Ahmed, a senior at Midwood High School in Brooklyn, was riding the subway home from his after-school job at a local library. Suddenly, a man struck a Jewish woman on the train in the face. “It was a very hard slap, I almost could feel the slap,” Ahmed later told journalists. “He was 6’6” and a very big, big guy,” explains Ahmed, who at about 5’8”, would seem no match for the assailant.

Ahmed immediately realized that the woman who was hit was Jewish. “She was dressed, like religiously, you could just tell she was Jewish,” the teenager explained to reporters afterwards. He looked at the attacker. “He was all the way in the back and I was just looking at him like, knocking, and I was like, ‘I see you, you can’t hide, you coward.’ ”

Most passengers did nothing. As the attacker ran from the train, Ahmed leapt into action.

As Ahmed and the other commuters watched, aghast, the woman fell to the floor with blood all over her face and briefly seemed to lose consciousness. As she came to, she sobbed “Why would he do this to me? Why would he do this to me?” as she looked for her glasses which had been knocked to the ground. One passenger came to help the stricken woman, but most passengers did nothing. As her attacker ran from the train, Ahmed leapt into action, thinking, “You only live once, so you might as well try to make a difference in the world.”

He held open the doors and shouted for help, then decided to run after the attacker.

When Ahmed reached the street, still shouting and pursuing the attacker, he was given a ride by an Orthodox Jew who was driving by and offered to help in the chase. The two spent their drive talking about the fact that this attack could be considered a hate crime. When they saw the attacker stop and wait by a bus stop, they called the local “Shomrim” Jewish security patrol who contacted the police.

New York State Assemblyman Dov Hikind, whose district includes the Brooklyn neighborhood where the attack took place, explains what happened next in an exclusive Aish.com interview. The attacker was very aggressive as he was arrested. “I said to Ahmed, ‘You risked your life by chasing him and watching him until the police arrived.’ Ahmed doesn’t see it like that… He said he just did the right thing that anyone should do.”

This wasn’t the first time that Ahmed had acted valiantly. A few months previously, the high schooler had stopped a suicidal homeless person from jumping from a train down onto train tracks. He explained to Aish.com that the man was about to leap from a moving train, “so I went and grabbed him and slammed him into the train and held him until the next stop” where a woman pulled the emergency brake and summoned help.

Even though Ahmed insisted he was no hero, Assemblyman Hikind was determined to honor the teen. On January 5, 2017, Ahmed, along with his parents, cousins, other relatives, friends, Imam and others attended a ceremony in Assemblyman Hikind’s Brooklyn office. The assemblyman gave him an official citation honoring his bravery.

“I know a legislative resolution is nice,” Mr. Hikind confided, “but it’s just a piece of paper.” The Assemblyman had spoken with Ahmed’s father, a refugee from Sudan, and was told that the college-bound senior didn’t have a computer. “I wanted to give him something practical,” Mr. Hikind explained. He turned to the Orthodox Jewish owners of a local tech store, Focus Camera, and asked for help. The store owners were thrilled to help and donated a laptop which Assemblyman Hikind presented to Ahmed along with his citation. 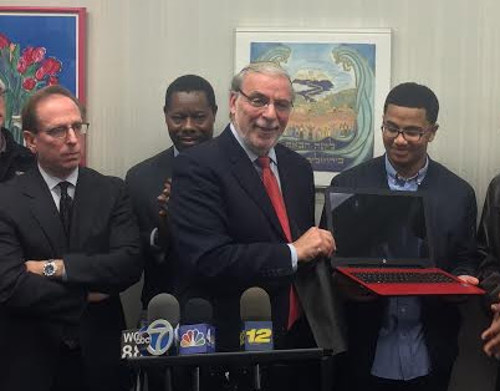 “Ahmed Khalifa has a bright future ahead of him… At 17, he truly embodies what it means to be a caring, loving decent human being,” Assemblyman Hikind said at the ceremony. Muslim leader Imam Awad ElSayed concurred, adding that “Ahmed brought our community together… I’m not talking about religion. We are human beings here together as one community right now.”

Also at the ceremony was Rabbi Moshe Shmiel Rottenberg, who explained, “I want to thank Ahmed for bringing us together today as a result of his bravery and heroism throughout this entire process. We appreciate what he did for our community, and as I always say, one good deed is greater than 1,000 inspirations. Thank you, Ahmed.”

Mr. Hikind has been in touch with the victim of the assault and reports that she is “so terrified… so scared you can’t imagine… She wants to say thank you to those who helped her, but she’s been traumatized by her attack which resulted in a brief hospitalization. 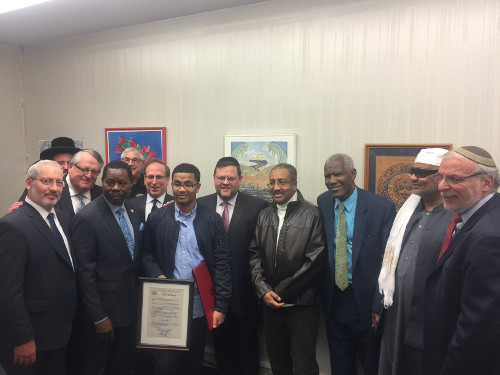 Although it’s too soon to know if this assault was an official hate crime, attacks on Jews in New York have skyrocketed in recent months. In December 2016 New York police reported a “huge spike” in hate crimes, with Jews making up most of the victims. “There is no question that there are more incidents that are happening,” Assemblyman Hikind notes. “We hope for the best. Hate has not disappeared. Maybe it’s getting worse.”

Against this bleak background, Ahmed Khalifa’s bravery is inspirational. “I’m very proud of him. I love him a lot. He’s a good son. I just raise him good; I teach him what to do, how to help people,” his father, Abdurhman Khalifa, told Aish.com. Ahmed’s 12-year-old sister concurs, explaining to Aish.com, “My parents taught me and my siblings to be brave. This means helping others and standing up for them.”

But Ahmed insists he’s no hero. “Everyone should be doing this because we are all one people. I would help anyone out no matter who they are, and I’m just happy people are learning that this is the right thing to do.”

With Rifle and Baby in Hand

Why Dip into Honey?
The Softball Player
How This 6 Generation Bread Baker Brought Back Israel’s Ancient Grains
Olivia Newton John’s Grandfather was a Nobel-Prize Winning Jewish Physicist
Comments
MOST POPULAR IN Current Issues
Our privacy policy
Aish.com Is Looking for Great Writers