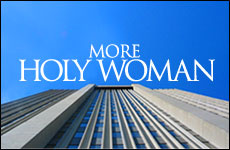 In shark-infested waters, their only life raft was reassuring words.

Eli and Shaya, two yeshivah students from England, decided to start a hi-tech company. Since they had neither financial backing nor experience, they understood how important it was to engage an expert business consultant. The consultant they turned to was a septuagenarian Chasidic woman who lived in Jerusalem. She always wore two housecoats, one atop the other, and a babushka. Her own business experience had consisted of a dairy farm of eight cows, a venture that had never been particularly profitable. Her name was Rebbetzin Chaya Sara Kramer.

Eli and Shaya called the Rebbetzin every week and consulted her about everything. Every month, Shaya, who had moved to Jerusalem, brought her a cash donation to help with her living expenses. They used to tell her that she was a partner in their business.

A year and a half after founding their company, Eli and Shaya were sued by a famous American blue-chip corporation. The young entrepreneurs hired lawyers. After reviewing the case, their lawyers informed them that they didn't have a chance of winning against such a large, powerful conglomerate. Disconsolate, Eli and Shaya went to Rebbetzin Chaya Sara and told her their lawyers' prognosis.

Her response was: "Fire your lawyers and fight!"

However doubtful of their prospects of winning, they obeyed. The conglomerate's lawyers were callous and intimidating. When they phoned Eli from New York to discuss the case on September 11, 2001, just after the collapse of the Twin Towers, Eli told them: "Maybe we shouldn't discuss business today so that we can be together in bereavement for what happened in the United States." The sharks replied: "Business is business."

"Be strong, fight it! Don't let them intimidate you... you will win completely."

Finally Eli and Shaya were to meet with the American conglomerate's lawyers at their London office. It was raining. The two young religious men were standing in front of the imposing high-rise office building. On their cell phone, they called Rebbetzin Chaya Sara in Jerusalem. She told them in Yiddish, "Be strong, fight it! Don't let them intimidate you. You are right, and you will win completely."

Tremulous, Eli and Shaya got into the elevator and pressed the button for the top floor, where the meeting was to be held. As they stood there flicking through the thick files in their hands, they suddenly saw a document they hadn't noticed before. With a start they realized, "This is the winner."

After two torturous hours of intimidation, Shaya took out that document, laid it on the table, and told the sharks, "Read this. It's either everything or nothing. You have until tomorrow to give in, or we'll counter sue you and make a big noise on Wall Street."

The next day, Eli and Shaya received an email saying, "You won." They received a settlement of over $200,000.

The next time Eli and Shaya got involved in litigation, they were sure they were right and were determined to fight. The opposing company's lawyers wanted to make an out-of-court settlement, but Eli and Shaya refused. Six months into the dispute, they went to Rebbetzin Chaya Sara for a blessing to win. She told them, "Don't fight. Negotiate."

"We didn't want to negotiate," Eli recalls. "We were in the right and we wanted to win the dispute." They tried to convince Rebbetzin Chaya Sara, but she was adamant that they should compromise. She even told them the exact amount for which they should settle.

They told Rebbetzin Chaya Sara the latest developments. She replied, "Let it go to court. After the hearing, they'll be willing to negotiate. But don't waste money on lawyers."

The litigation dragged on for another two and a half years. During that period, most dot.com companies went bankrupt because of protracted litigation and legal fees. Eli and Shaya, heeding the Rebbetzin's advice not to spend money on lawyers, managed to stay afloat.

After the case went to court, the two companies negotiated a settlement for the exact amount that the Rebbetzin had stipulated two and a half years before.

She looked through the peep hole in her door and told them to come back in a few days.

Rebbetzin Chaya Sara's prescience was not limited to business matters. When Eli married Chani, he was learning in Kollel in Jerusalem. They went regularly to Rebbetzin Chaya Sara for a blessing to have children. One Sunday, 13 months after their wedding, the young couple went to visit the Rebbetzin. She looked through the peep hole in her door and told them to come back in a few days. "It was the only time she ever sent us away," remembers Eli. 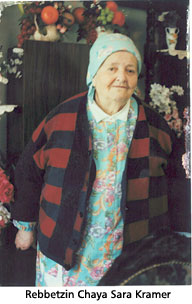 He took his wife to Netanya for five days. The following Sunday, they again visited the Rebbetzin. She turned to Chani and told her in Yiddish, "You're pregnant." A blood test the next day verified the Rebbetzin's words.

Three years later, Eli and Chani had moved to Antwerp. On Succos they visited Jerusalem together with Eli's parents. Chani was expecting their third child, but it was too soon to tell their parents or the Rebbetzin. On the intermediate days of the holiday, Eli, Chani, and his parents visited Rebbetzin Chaya Sara. Chani walked in carrying a heavy bag. The Rebbetzin immediately turned to Eli and told him, "Take the bag, because your wife is pregnant." His parents were totally surprised.

In Antwerp one Shabbos in 2001, Chani, in terrible pain, had to be rushed to the hospital in an ambulance. Her breathing was so labored that the medics had to put her on oxygen. At the hospital, the doctors diagnosed a kidney stone. Whereas most kidney stones are small and pass out of the body naturally, this kidney stone was large and lodged in a place from which it would not budge. The doctors asserted that there was no way to get rid of the kidney stone except through emergency surgery. They scheduled the surgery for the first thing Monday morning.

"There will be no operation."

That evening, the nurses prepped Chani, still suffering intense pain, for surgery the next morning. Eli stayed with her until late in the evening, and then left to go home. A half hour later Eli was still en route when his cell phone rang. It was Chani. "I have no pain," she declared in wonderment.

Eli turned the car around and rushed back to the hospital. He told the doctors on duty that he wanted another scan. They performed the scan, and, to their amazement, the kidney stone had disappeared. Chani was discharged that very night.

When Eli and Chani's son Yossi was ten months old, they noticed that he was very pale and weak. On a Thursday afternoon, they took him to a pediatrician, who ordered a blood test. At 11 PM that night, the phone rang. Their pediatrician, sounding grave, informed them that the blood test revealed that Yossi had no iron at all in his blood. He needed an emergency transfusion, scheduled for 6 AM the next morning.

At the hospital at dawn, two specialists sat down with Eli and Chani and told them that they believed that Yossi was suffering from leukemia. His hands trembling, Eli left the room and phoned Rebbetzin Chaya Sara. She told him: "Everything will be all right. Do the transfusion, but it's not what the doctors say."

After the transfusion, Yossi's blood was taken for tests. Eli and Chani were informed that it would take four hours for the results to reveal whether Yossi was indeed suffering from the lethal disease. During those four hours, the young parents felt like they were in shark-infested waters; their only life raft was Rebbetzin Chaya Sara's reassuring words.

At the end of the interminable four hours, the doctors, not masking their surprise, announced that Yossi did not have leukemia after all. That one transfusion was sufficient to restore his health.

STILL WATCHING OVER THEM

During the period 2000-2002, most hi-tech companies crashed. Nervous, Eli and Shaya considered liquidating their company. Rebbetzin Chaya Sara told them not to, to stay in there and weather the storm. They emerged from that disastrous period not only intact, but prosperous.

Whenever Shaya went to visit Rebbetzin Chaya Sara, he always had Eli in Antwerp on the line on his cell phone. Every erev Yom Kippur, Shaya went to Rebbetzin Chaya Sara for a blessing. She would write their names and the names of their wives in her prayer book. On the last Yom Kippur of her life, the Rebbetzin took Shaya's cell phone from his hand and said to Eli: "I asked my husband before he died, ‘Who will support me?' He turned around to me and said, ‘Don't worry. Whoever will support you will have big yeshuos [salvations].'"

Eli and Shaya felt that this was her way of thanking them for their years of support.

The salvations, however, did not end with Rebbetzin Chaya Sara's demise. As Eli declared two years after her passing, "We still believe that our success these days is because of her. She always said she would look after us."

This Wednesday night, May 20, is the 10th yahrzeit of Rebbetzin Chaya Sara (bat Mendel Yosef). Please light a candle in her memory.

Back from the Dead

Chanukah Lights Dancing
The Blue Beyond
Great Place to Live
Is Eating Supposed To Be Spiritual?
Comments
MOST POPULAR IN Spirituality
Our privacy policy