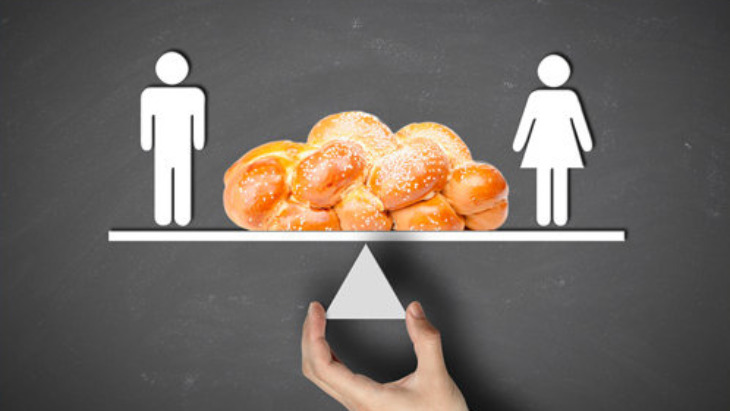 Judaism, Shabbat and the feminine mystique.

Is a pregnant woman one person or two? It's hard to be sure. True, the baby's heart beats beneath hers, but the pregnant woman continues to live her own life, think her own thoughts, and do her own thing. Baby flips and flops inside her, likes or dislikes the music she listens to and remains distinctly separate, even as his very being is nourished by her. Mother and baby remain two, even as they are one.

Then comes the next stage, where birth becomes the act of separation in order to come together again. Mother and baby cuddle once more into a cocoon of brief but intense togetherness within the nursing relationship.

And even though that nursing baby will soon toddle off into independence, some mothers would maintain that that change in identity – that widening of the boundaries of self – never really goes away; a mother entering the delivery room discovers it’s a one way journey.

Biologically, women embody a blurring of boundaries between two discrete entities. Instead of clear demarcations where I am I and you are you, femininity flows over those borders in an undulating fluidity.

From a Kabbalistic perspective which sees the physical world as paralleling the spiritual with exquisite exactitude, biological woman becomes a metaphor for relationship, connection and bonding. "Woman” – created opposite Man because it "wasn't good for man to be alone" – experienced life as a dialogue from day one.

Maleness, on the other hand, in which relationship is externalized, represents separation and individuation. This drive for autonomy and independence can easily segue into a focus on competition, acquisitiveness, and hierarchy, in the determined attempt to keep the boundaries between people rigid.

Despite this biological metaphor, of course not all women are relationship oriented. Many women never gave birth to or nursed a baby, and others, even if they did, do not resonate with the concept of fluidic boundaries. And it goes without saying that there are many men who live their lives centered on relationships. Gender, here, is used to delineate two different pulses that animate the human soul; clearly both of them can be manifested by both men and by women.

Relationships with others, with God, and with ourselves are the defining characteristics of Jewish life.

Interestingly, of the two models, Judaism resonates most strongly with the feminine. Relationships with others, with God, and with ourselves – bridging the chasms which separate us – are the defining characteristics of Jewish life. Success in Judaism is measured by our relationships: the emotional, spiritual, and moral well-being of ourselves and the people in our orbit.

It's hard to remember this truth in real life because Western philosophy valorizes the masculine and so sees people as intrinsically egotistical. The best we can hope for, Western philosophy maintains, is to convince people of the benefit of social contracts. Win friends and influence people because you never know when you will need those people in your determined rush up Mt. Success.

In this context, the feminine voice which realizes that not only I am I and you are you, but also I am you and you are I, gets trampled on, ridiculed, and all but drowned out.

But that feminine voice (which can, of course, be articulated by men as well) gets one critical reprieve: Shabbat.

Shabbat is relationship day – which is why it's referred to in Kabbalist sources as feminine – think Shabbat Queen, and Shabbat Bride. Shabbat is the day on which we place our to-do list firmly in the drawer, jump off the tread mill, and wriggle out from under the suffocating blindfold which our technological toys place over our eyes. On Shabbat we take a deep breath and look around at the family and friends who were at the periphery of our vision all week, at God who was waiting all this time for us to notice Him, and at our very own souls, malnourished and neglected , eagerly looking forward to some attention.

Completely unplugged with no work to escape into, we enter into a scary, unfamiliar world in which we become human beings instead of human doings.

Shabbat is a strangely vulnerable day. Without our car keys dangling from our hands, with our technological digits gone, with no work to escape into, we enter into a scary, unfamiliar world in which we become human beings instead of human doings. We inhabit a world where what is important is not what you accomplish but who you are.

As we light the candles that illuminate our journey into the magic world of Shabbat, our family and friends seek a guide to help them over the threshold, into that mysterious place.

Women metaphorically represent the concept of relationship, and in real life are often the guardians and nurturers of family ties (there is a reason why it takes so much longer to get off the phone when Mom calls then when Dad does). As such, women bring a unique gift to the Shabbat experience. Way beyond chicken soup, and even freshly baked challah, is the gift of having someone who speaks the language of Shabbat.

Being born into a feminine body does not guarantee an immediate affinity to placing relationships first, but since our bodies are the medium through which our souls interact with the world, God has gifted women with a readily accessible metaphor to help them help their families and friends – and themselves – to sing the song of Shabbat.

On Friday before dusk, women light two candles – two separate entities – shining beacons that lead us into the world of Shabbat. Saturday night, we recite the havdala service using one candle, which – Jewish law tells us – must have at least two wicks. After a weekend in the feminine world of Shabbat, those two separate candles we lit on Friday night merge into one candle with two wicks – two who are really one, one who is really two – shining the gift of femininity out into the week.

Click here for information about the upcoming Shabbat Project.

Shabbat: Imitating Creation
Is Grease the Word?
Dried Fruit Compote
Scientific Curiosity and the Divine Encounter
Comments
MOST POPULAR IN Shabbat
Our privacy policy
Aish.com Is Looking for Great Writers